I very much enjoy my birding travels – new birds, new places, new people.  BUT…one negative is that it seems like there is always some great bird that shows up near home when I am gone.  Two distinct memories of such occurred when I was in Maine and Massachusetts in late June and early July 2015.  The first was a Great Shearwater that was found on a pelagic trip out of Westport on June 27th.  A very rare bird in Washington, it was supposed to have been a “given” on the pelagic trip I took in Maine 10 days earlier through a wonderful program at the Schoodic Institute.  Nope first time ever they had missed it on the trip.  Sigh… But I did see one later on my North Carolina pelagic trip on June 30th this year.

Earlier that month a Crested Caracara was reported in Skykomish – perhaps the first accepted Washington record.  Every day in Maine and Massachusetts I saw reports coming in for this incredible sighting.  Would it stay?  I was able to see it on July 4th after I got home – and then it was gone – possibly killed by the mad man goat farmer.  So at least that had a happy ending for me if not the Caracara. 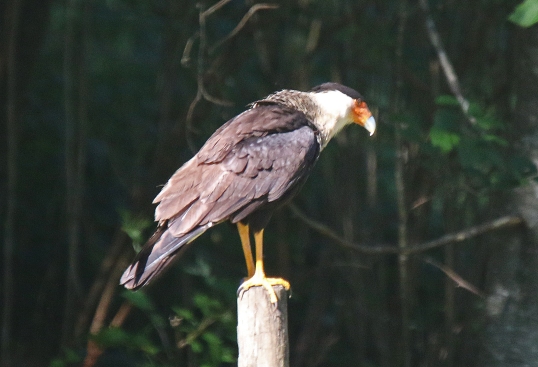 On December 16th, a Fieldfare was found on the Salmon Arm, B.C. Christmas Bird Count.  On that day I was doing the Low Country Christmas Bird Count in Beaufort County, South Carolina.  I learned of the Fieldfare the next day.  Fieldfares are Robin-like thrushes that are common in Europe and occasionally show up in the Northeastern U.S. and Canada.  One was seen in Idaho in 2015 and there is a possible record from B.C. in 2003.  So a VERY rare bird.  I still had three more days in Georgia ahead before flying home on December 19th.  Would it stay?  And it was a very long ways away – 350+ miles from Edmonds.  But quite a great bird…

On December 18th – Ann Marie Wood and John Puschock – Washington birding friends had made the long trek and found the bird.  Others had done so on the 19th.  It was still there.  Figuring that I was still on East Coast time and still high from my great South Carolina and Georgia visits (soon to appear on other posts) I decided if nothing else it would be an adventure and committed to go on the 20th.  Taxiing in to the gate at Seatac Airport, I posted that on Tweeters to see if anyone else was interested.  I got an almost immediate response from good friend Steve Pink that he wanted to go.  A bit later I got a message from B.C. birding bud Melissa Hafting that two of her friends desperately wanted to go but had no car.  Could I take them?  Mel had seen the bird on the 17th and was the first person to tell me about it.  Sure…I would be happy to help.  I then got inquiries from another half dozen people – but my car was full.

This would be a long trek so an early morning start was essential.  Steve came to my house at 4:30 and we headed off to the Sumas border crossing.  It took a bit longer to get there but we sailed through the crossing – “Where are you going?”  – Salmon Arm.  “Why?” – to hopefully see a rare bird.  “Really?” – Yes.  “OK”.  Five minutes later we met Joachim Bertands and Graham Sunderland at the Abbotsford Costco, loaded up and were off.  A complication was that bad weather – lots of snow – was predicted for the Coquihalla Highway (Route 5) so we had to go the even longer route of Highway 1 – the Trans Canada Highway.  This would add almost 90 minutes to the trip – but that was better than getting stuck.  It was 6:15, dark, raining and miserable driving.  Not going to go through all the details, but with a stop for bathrooms and gas, we finally pulled onto Krick Road just south of Salmon Arm around 11:20.  We had a report earlier that one of Joachim’s friends had seen the Fieldfare an hour or so earlier and there was a birder at the stakeout site as we approached.  It wasn’t sunny but it wasn’t snowing or raining…things looked good. 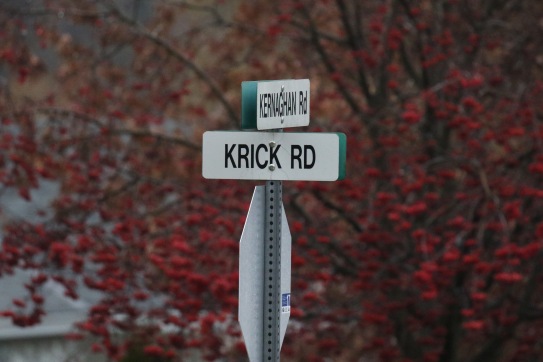 He had a smile on his face – a good sign.  He had indeed seen the Fieldfare – about five minutes ago – but it had flown off to an area behind one of the houses.  He left and we searched – and searched – and searched.  We found a single American Robin, heard a Black Capped Chickadee and watched a small group of European Starlings come and go.  It was QUIET!!!

When I first conceived of this chase, I felt it was a 50/50 proposition.  When I heard that it was seen on the 19th, I raised the odds to 75% and when we hear that Joachim’s friend was successful, I was at least at 98%.  Hearing that it had been seen 5 minutes before we arrived I was now at 100% BUT as it remained quieter and quieter, I was not so sure.  We spread out and after maybe 25 minutes of searching Graham said he saw a group of Robins.  He had not seen the Fieldfare, but Joachim (definitely the sharpest – and youngest – eyes) was able to ID the Fieldfare buried in a distant tree.  We got horrible views and even worse photos but at least we had the bird.  AND then – thank you Bird Gods – the flock flew closer and then even closer as they returned to their favored Mountain Ash trees to feed on the berries right at the corner of Krick and Kernaghan roads.  Great views and great photos – and we all had a new ABA Lifer!!

We watched the Fieldfare for another 30 minutes – very happy indeed.  We knew we had a long return trip and checking the road conditions, things looked good for the shorter Coquihalla route if we left right away.  So we were off – way beyond satisfied.  It was mostly clear and beautiful as we retraced part of our steps through Kamloops and then hit the Coquihalla – beautiful multi- lane divided highway.  Conditions were great until we hit maybe the last 30 miles where we encountered snow, ice and slush.  All was good until I hit one curve a bit too fast and felt my left front wheel spin and then pull us into a dangerous condition.  Many years ago I had taken a course on driving in snow and ice and the training paid off.  I was able to steer into and through the slide and just missed an area where plowed snow had piled up and after a few seconds that probably seemed much longer top the passengers – got complete control without any harm done – just increased adrenalin and heart rates.  I went slower the remainder of the way and we made it back to Costco safe and sound just before 6:00.

Steve and I said our goodbyes and then continued on for the last 100 miles back to Edmonds.  This border crossing took a bit longer but the guard was very friendly and smiled about our bird.  I had expected to be very tired from the 750+ miles of driving but the good company in the car and then successful chase overcame that and we were back home before 8.

Joachim and Graham proved once again that my enjoyment is as much from the people as from the birds. Joachim is a graduate student from Belgium who has an amazing life list both in the ABA and in the Western Palearctic areas.  He was a fountain of knowledge and stories and taught us a lot.  Graham, like Steve Pink, is a former Brit.  Very interesting bloke who has never driven a car!!  He worked for a cruise line and has traveled the world.  He, too, had many good stories. One was about a Sedge Wren on the Falkland Islands.  Steve and I wondered if maybe this was a misidentification as we could not imagine a Sedge Wren there.  Research confirmed – there is a race of Sedge Wrens there – who knew.