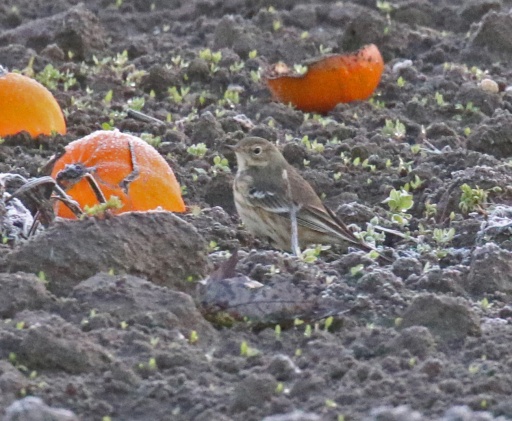 The day started cold and crisp but it got warmer and warmer and nicer and nicer – a brilliant day of birding in the Fir Island area in Skagit County.  Pilchuck Audubon has a trip every Tuesday mostly fairly local in Snohomish or Skagit County but sometimes ranging further afield even into British Columbia.  There are perhaps 20 “regulars” and you can always count on at least half of them being on any trip – great friendship shared with the also great birding – and the cookies!!

I have not been able to join the group as often as I would like – somehow other matters conflict with Tuesday too often, but it is always fun when I do.  And it is also always instructive as Virginia knows every back road and birding spot and has years of encyclopedic recall about what was seen where and when.  I go to places that are in my backyard so to speak but are still new to me.

I won’t try to catalog every stop and instead will concentrate on two special stops at Wylie Slough and Hayton Reserve but there were many birds on the back roads and our caravan enjoyed a diverse collection of raptors, passerines, waterfowl and shorebirds.  All told we found close to 70 species.  Not every bird was seen by every birder but the special ones were.

Raptors included Bald Eagles, American Kestrels, Red Tailed Hawks, Peregrine Falcons, a Merlin, Sharp Tailed and Cooper’s Hawks, Northern Harriers and a Rough Legged Hawk.  Unfortunately no owls (including a no show of the Barn Owl on Moore Road) and we also did not see the Prairie Falcon that had been reported at Hayton earlier this week.

We also found a good variety of sparrow like birds: White and Golden Crowned, Lincoln’s, Song, and Fox Sparrow’s plus Spotted Towhee and Dark Eyed Junco.

Unfortunately no White Throated Sparrow which would have been a FOY for me but I heard from several in the group that they had had this species visit their yards earlier in the year.  Maybe I can visit next year if they return.

It is still a little early in the winter but all through the day we had groups of Trumpeter Swans and Snow Geese – with a large flock of the latter at Hayton numbering over 1000.  There was also a single flock of Cackling Geese and a few Canada Geese.

I must admit that I too often take the geese and swans for granted.  The excitement of many of the birders in the group as they saw these beautiful birds for the first time this season reminded me just how fortunate we are to live so near to an area where they return in the thousands each fall.  Always a spectacular show.

We arrived at Wylie Slough in the Skagit Management Area just before 11:00.  A Black Phoebe had been reported from the area earlier.  One of the group had already seen it – or maybe not.  When he got home and looked more closely at his photos, the white undertail and conical light colored bill proved it instead to be a Slate Colored Dark Eyed Junco – actually even more uncommon than the Phoebe.  At first we saw no shorebirds in the mud or shallow water so we walked the trail and looked for passerines and then went to the blind to see what ducks we might find.  The Fox Sparrow photo above was from this area and we also had a small flock of Pine Siskins and another small group of Bushtits and two wren species – Bewick’s and Marsh Wrens plus more Sparrows and Towhees.

From the blind, we could see a small group of Ring Necked Ducks (please, please change the species name to Ring Billed Ducks), a pair of Hooded Mergansers, Green Winged Teal and Northern Shovelers.  In the fields behind the blind or in the distant trees in the slough we found Bald Eagles, Peregrine Falcons, Northern Harriers and a Sharp Shinned Hawk.

Then it got real exciting.  Just past the blind across from the dike we arrived at the area where the Black Phoebe had been reported (and where the Slate Colored Junco had also been found).  We looked and listened – nothing.  Another Peregrine was found and a Belted Kingfisher’s rattle announced its appearance.  I tried the “phee-bee” call of the Black Phoebe hoping it might bring a response – but there was none.  Whoa – maybe three minutes later, the Black Phoebe was spotted in a tree very near.  It did its flycatching thing and all got good looks and photos.

Black Phoebe (Note the small insects flying around the bird)

And then a juvenile Northern Shrike was spotted.  The Phoebe flew into brush near the slough and there was an almost immediate series of shrieks and rattles and chortles that turned out to be an adult Northern Shrike.  We thought that it was interacting with the Phoebe and – oh no maybe it was preying on it.  The juvenile Shrike had also flown into the area and we think that was the interaction.  It was also possible that there was a second adult Northern Shrike – as there were many visuals in different areas.  But there was so much activity and flying about that it was not clear if there were two or three Shrikes. 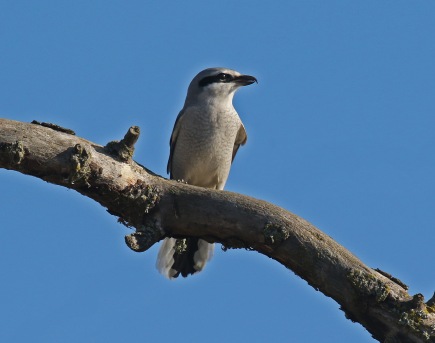 Some of us had gotten out to the area by the dike quite a bit ahead of the others.  The Shrikes and Phoebe were very obliging though and everyone got good looks and enjoyed the activity.  I also learned that while our earlier group had been out past the blind and before I used the Phoebe playback, one of the other birders had thought she heard what sounded like a Willow Flycatcher at least 150 yards further down the path – closer to the parking area.  Most likely she had heard the Phoebe with its “phee -bee” call not so different from the “fitz-bew” or “fitz-bee” call of a Willow Flycatcher.  So apparently my playback had drawn the Phoebe out to us from at least 150 yards away.  And the proof of the pudding so to speak was that as we returned to the parking area, we heard the Phoebe calling and relocated the bird there.  So it does cover quite a distance.  Phil Dickinson had seen the Black Phoebe that was first reported by Josh Adams on Fobes Road and this was his experience there as well – as he and David Poortinga found the Phoebe at least that distance from where Josh had it before.

Also on the way in, we got good looks at a small flock of Greater Yellowlegs that had flown in and we heard a Virginia Rail that responded to my “grunt” playback. 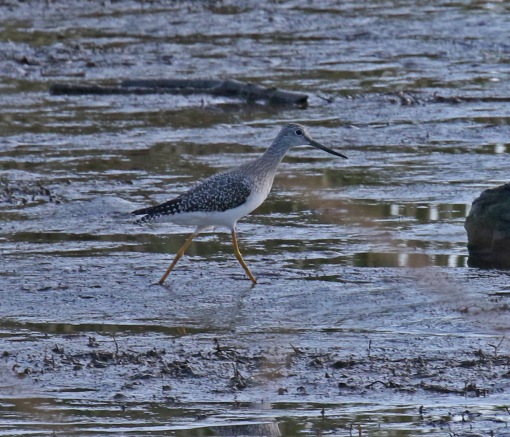 Jon and Kathleen Houghton had come to Wylie just in time to get on the Black Phoebe our group had found.  They were soon to return the favor.  They headed off to Hayton Reserve while our group had our picnic at Wylie.  I asked Jon to call if he found the Sharp Tailed Sandpiper that had been hanging at Hayton for the past two weeks.  Maybe 15 minutes later I got the call – but Jon said the tide was out and there were no shorebirds.  After lunch (and more of Virginia’s cookies) we headed over to Hayton Reserve.  Just as we arrived I got another call from Jon – they had the Sharp Tailed Sandpiper.  I announced the find and a group of us charged up to path where I could see Jon and Kathleen.  Turned out that the Sharp Tailed was not quite that far out though and I stopped just in time to see it fairly close in on the mud just east of the bank.  It remained for several minutes affording good views and some photos for some of us before flying over the path and into the shallows on the other side  giving some more birders a view.  This was a life bird for most of the group.  Unfortunately it then disappeared and remained so as the tide came in much quicker than expected. 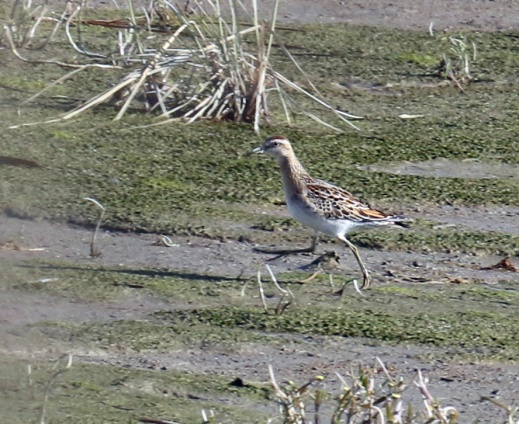 Although the Sharp Tailed Sandpiper was definitely the star, there were lots of birds at Hayton:  hundreds of Dunlin, dozens of Greater Yellowlegs, Long Billed Dowitchers, Mallards, American Wigeon,  some Bufflehead and Pintails, and 1000+ Snow Geese.  We also had a single American Coot – our only one of the trip. 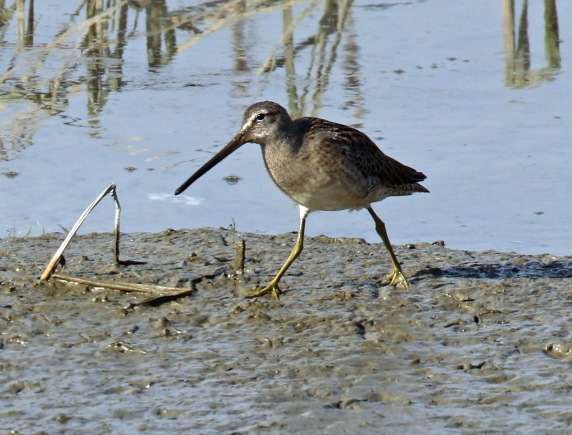 Two more stops.  We missed the Barn Owl at Moore Road (the same spot Steve Pink had shown me the previous week – when we in turn missed the Sharp Tailed Sandpiper at Hayton).  Then we went to the North Fork area where we did find the sought after American Bittern – only a distant flyby – but it was Virginia’s goal to get one for the trip so a fitting ending indeed.

It had been a really good day – good weather, very good birds and even better company.  Everyone departed happy – no tricks – only treats.  Happy Halloween.