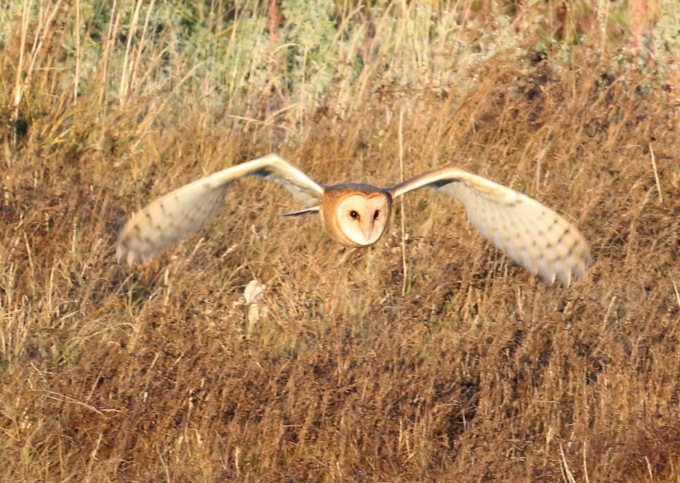 How nice if I could write an excited blog about successful chases recently – finding the Little Gull at Point No Point, the Blue Grosbeak at Neah Bay, the Red Shouldered Hawk at Three Crabs or even the Golden Plovers at the West 90.  But alas, no can do.  I was batting zero – having failed at all of these recent pursuits.  If the Joy of Birding was measured as specific birds pursued and found, it would be an unhappy time indeed.  And while I am not going to pretend that there was no disappointment and unhappiness in each of those “misses”, fortunately there have been nice returns on the efforts in the field looking for those special birds.

The Little Gull was first found at the Point No Point area by Kelly Beach and others participating in a bird survey by boat on the morning of Friday October 13th.  Brad Waggoner was able to search for the bird later that morning and after several hours of diligence he was rewarded first with distant scope views and then with a close fly by giving him a chance to get some fabulous photos which I include below – taken from his Ebird report. 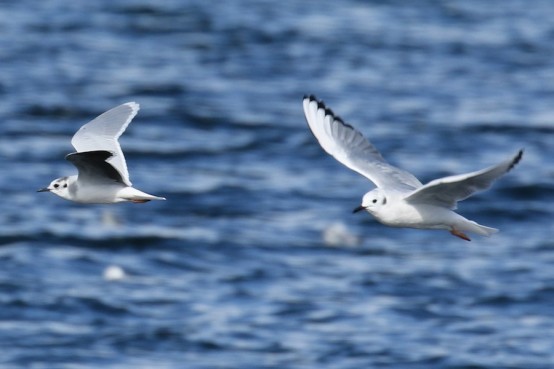 News of the sighting hit Tweeters on the afternoon of the 13th – too late to chase it that day but definitely something for the next day.  I had seen a Little Gull in Washington twice before.  The first was at the Everett Sewage Ponds on September 23, 1984 and the second was at the Point No Point location on October 7, 2013.  The gull was far from shore in 2013 and with the help of the Olivers, I was able to get a very poor distant photo.  That gull was first found by Matt Bartells the previous day and I was hoping this gull would also remain another day.

I got to Point No Point early on the 14th at 8:30 a.m.  I had alerted Carol Riddell to the Little Gull but she had received the message too late to join me at first.  She arrived maybe an hour later.  Ken Brown, a terrific birder from Tacoma was already there when I arrived.  It was a beautiful day and there were lots of gulls, but despite our thorough searching over many hours (almost 8), no Little Gull was to be found.  It would have been a new bird for the year – both in Washington and in the ABA for me – but at least I had seen and photographed it before, so the disappointment was somewhat tempered.  Brad’s photos were so terrific, I was mostly hoping to have a chance for one as well.

But as I have written before, there were consolations. There was the chance to visit with Ken and with Carol – enjoyable and educational.  And there were other good birds.  Sarah Peden and Jordan Gunn, both Master Birder Classmates, had also come to look for the Little Gull.  It was Jordan who first saw a Franklin’s Gull as we searched west of Norwegian Point.  Not nearly as rare as the Little Gull but definitely uncommon, it was the first one I have seen in Kitsap County.

And there were hundreds of Bonaparte’s Gulls as is usually the case here in the fall.  A treat among the Bonies was a good number of Parasitic Jaegers – chasing the gulls often working in pairs and making them disgorge their food – standard Jaeger behavior.

I was also able to show Carol a California Scrub Jay I had found before she arrived – a new county bird for her.  It was in the same spot I had seen one two years ago.  So no Little Gull but a good day of birding – and there would be other chases on another day.

Over the next week plus as I wrote in my most recent blog post (See Dream Birds https://wordpress.com/post/blairbirding.wordpress.com/18761) I dreamed of birds instead of going to look for some.  I saw reports of a Sharp Tailed Sandpiper that was being seen at Hayton Reserve and of Golden Plovers seen at the West 90 among other places, but maybe the energy was low or I was just not motivated since I had seen these species earlier this year and had photos.  Eventually the good weather and inactivity weighed too heavily and I decided to look for these birds and who knows maybe something else like a Lapland Longspur or Snow Bunting in Skagit County.  Late morning on Monday October 23, I set off and called Steve Pink to see if he was interested in going.  It turned out that he was already out at the Tulalip Spit, another area I had considered, so we arranged to meet at Hayton Reserve.

At Hayton we saw hundreds of shorebirds – but there were no Golden Plovers or Sharp Tailed Sandpipers among the Dunlin and Dowitchers.  We left a car in town and then headed to other spots including a barn with a Barn Owl in a nesting box along Moore Road.  The Owl was tucked way in the back but we could at least identify it as such.   When we arrived at the East 90, we quickly identified the plowed field where the Golden Plovers had been reported for many days but there were no birds present at all.  The only consolation was a fly by of a Red Tailed Hawk that turned out to be of the dark Harlan’s form.

It was more of a disappointment for Steve since he had not seen Golden Plovers this year, but we were both a bit bummed.  And this disappointment was to be compounded.

Prior to setting out for Skagit County, I read a post on Tweeters from Ryan Shaw.  He was in Neah Bay with a big group of top birders and was looking at a Blue Grosbeak in brambles near the Minit-Mart.  I had seen and photographed the bird earlier in the year in Arizona and Florida but I had never seen one in Washington.  In fact this was only the second state record.  Randy Hill had found one in Neah Bay previously.  When I saw the post it was past 10:20 a.m.  If I hustled I might be able to catch the 11:10 ferry and possibly get to Neah Bay by 3:00 p.m.  I decided to wait and see if others reported the bird later and if so then to try for it the following day.

I told Steve of the report when we were out and it would be a new State bird for him as well but he had other plans for the following day and probably could not go.  It turned out that David Poortinga was then in Sequim and when he learned of the Grosbeak, he continued on to Neah Bay and he relocated the bird that afternoon.  This was all I needed to commit to a chase the next day.  After some family negotiations, Steve arranged to go as well.

The bird apparently had first been discovered by Bill Tweit.  The Washington Bird Records Committee had been meeting in Neah Bay and they all got a chance to see the bird.  Later David Poortinga and Alex Patia saw the bird and the photo below is from David’s report. 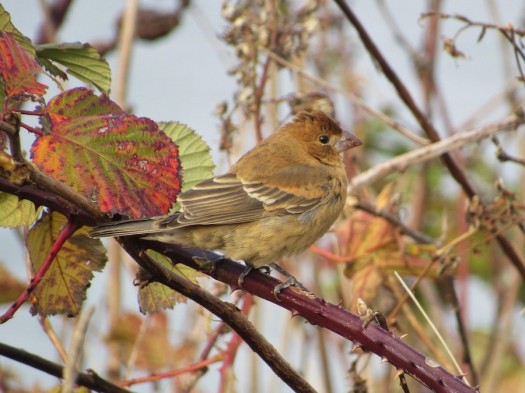 Steve and I caught the 6:10 a.m. Edmonds Ferry and were in Neah Bay before 10:00 a.m.  We went directly to the spot where the bird had been seen and searched hard for the next hour.  We were surprised that no other birders were already there.  Ken Lane showed up and he joined the search.  We had no success.  Sigh…

Steve and I continued to bird in Neah Bay for the next several hours returning often to the Minit Mart area but nothing changed.  The Blue Grosbeak had been a one day wonder.  Such is often the case – but it sure was a downer.  Steve and I had 50+ species in Neah Bay but nothing unusual.  We gave up and headed home planning a stop to see if we might find the Red Shouldered Hawk that had been reported at Three Crabs in Sequim.  It was getting late when we got to Helen’s Pond and in a car heading in the opposite direction was Brad Waggoner.  I enviously complimented him on his Little Gull photo and asked if he had seen the Red Shouldered Hawk – “Not today”.  Yikes – another miss?

We saw some birds with the best probably being two Eurasian Wigeon hard to pick out from the thousands of American Wigeon in the Bay.  We had seen a Sharp Tailed Hawk but otherwise no raptors at all.  As we started to leave I noted what might be a raptor in a tree behind Helen’s Pond – the area where the Red Shouldered Hawk had been seen.  As we got out of the car for a look, we both saw what we believed to be a Short Eared Owl fly out of a ditch and then continue hunting in the fields.  The bird in the tree turned out to be only a Red Tailed Hawk.  That was disappointing but the owl now had our attention and great interest.  Over the next 20 minutes we watched it hunt making several dives and flying both away and towards us in beautiful light.  Now we could see that it was a Barn Owl and we were enthralled by the show.  It was a County first for both of us and the experience made us forget about the earlier misses.  Like a hail Mary pass that snatches victory from the jaws of defeat in a football game, this was a great way to end our day.

So the owl was a treat – not really close to what the Blue Grosbeak would have been by some measures but it was great to share the experience with Steve.  Nobody else has reported the Grosbeak so at least we do not have to feel bad about that – but we did learn that the Golden Plovers we had missed at the West 90 had been seen two hours before we got there.  If we had started there and then went to Hayton – well who knows.

Hopefully my accounting of the missed Blue Grosbeak has not been taken as whining.  Maybe if I had followed my own Rule #1 the story would have been different.  Rule #1 for any “chase” is “Go now!” with Rule #2 being “If you fail to follow Rule #1, there can be no whining.”  What if I had taken the chance and gone to Neah Bay as soon as I read Ryan’s first post?  Odds are fairly good that I would have been successful (and very tired).  But if I had made that trip alone and failed to find the bird, it would have been a major downer – and there would have been no Barn Owl show.  Next time I will…