This will be a short and very focused post and will be followed later by a longer one covering my wonderful 50/50/50 time with Keith Carlson and Terry O’Halloran in Northern Idaho.  The original plan had been to do the 50 species day with them in and around Lewiston, ID on Sunday June 9 spending that night afterwards in Lewiston.  Then I would do the long 8+ hour drive to Twin Falls, ID spending the night of the 10th there and try for the Cassia Crossbills the next morning at the Diamondfield Jack Campground.

Keith and Terry were such fabulous “guides” that we had over 75 species before 2 p.m.  This enabled me to hit the road and get to McCall, ID where I spent the night of the 10th.  McCall is about halfway between Lewiston and Twin Falls.  With this head start I was able to drive through Twin Falls and get to the Diamondfield Jack Campground just after noon.  Even though I had been encouraged to try for the Cassia Crossbills early in the morning, I figured I might get lucky or if nothing else, I would be more familiar with the area increasing my odds for success on a return the next morning.

The drive along Rock Creek to the Campground was spectacular in beautiful weather.  Soaring cliffs and rock formations on both sides of the road.  The temptation was to stop and bird as I went since I was hearing Yellow Warblers and Yellow Breasted Chats.  But they would be there on the return.  I wanted to get to the Campground. 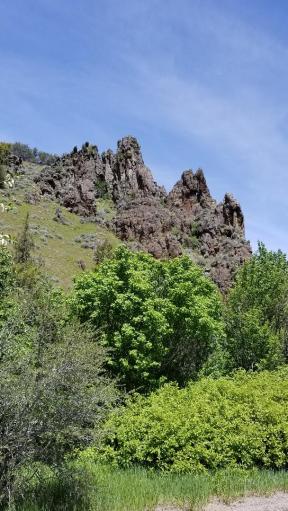 Word was that the Crossbills could be found near the parking area for the Campground.  This was my first “surprise”.  There was a huge and frankly quite ugly parking area.  Where to start?  I parked next to a picnic table and when I got out of the car I thought I heard some Crossbills.  I followed the sound and found a Red Breasted Nuthatch putting finishing touches on its nest hole but no Crossbills.  Then I heard some chatter at the other end of the parking area.  Off I went.  Several Yellow Rumped Warblers and some Cassin’s Finches but again no Crossbills. 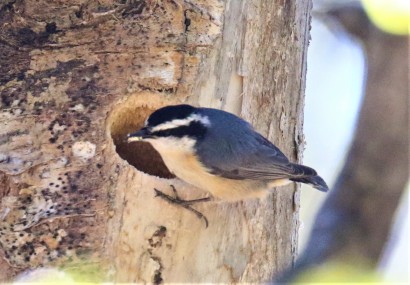 OK, time to breathe.  I returned to my car, got my lunch and sat down at the picnic table.  Some say that they would rather be lucky than good.  Nope I would rather be good than lucky…but this day I happily made an exception.  As I sat with my lunch they came in one after another after another – Cassia Crossbills – almost at my feet.  I had expected them high up in the trees but here they were down low feasting on the cones that were everywhere for the taking including on the picnic tables.  One landed on the picnic table next to mine.  Snap…an ABA Lifer and an ABA Life Photo!

Cassia Crossbill Working on a Cone

There was a small pile of remnant snow and that seemed to be a favorite spot as at one time there were 4 Crossbills on it and they were joined by Pine Siskins. 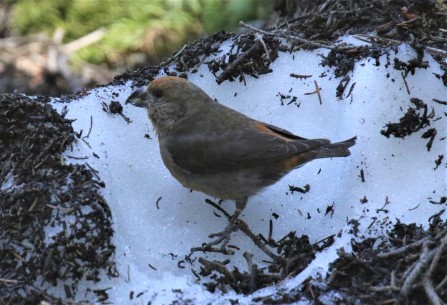 All told there were at least 22 Cassia Crossbills always on the ground or on low perches over an area of maybe 100 feet by 100 feet.  They seemed to act individually except for the bit of snow, but apparently there was some magic signal and as quickly as they had appeared – poof! and they were all gone.  The fun had lasted maybe 15 minutes.  I guess I picked the right time for my lunch.

Cassia Crossbills on a Low Perch 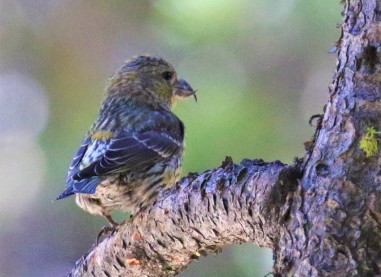 Elated does not begin to describe my feelings.  A beautiful place and wonderful birds and I had them both completely to myself.  I watched several of the Crossbills use those powerful crossed bills to pry the seed kernels out of the cones.  Their bills seem significantly larger than the crossed bills of the Red Crossbills.  The birds themselves seemed bigger as well, but without them being side to side, hard to say.  In any event this was a lucky day indeed.

The Cassia Crossbill was not recognized as a separate species until 2017.  Unlike the nomadic and widespread Red Crossbills, the Cassia Crossbills remain in their very limited habitat area in Cassia County.  They feed on the cones of the Lodgepole Pines which are plentiful in the Sawtooth National Forest.  I had great looks and a special opportunity to watch a behavior that I had not expected with them feeding on the cones ground.  A very lucky time indeed.

2 thoughts on “Cassia Crossbills – Luck Was With Me”