This story has lots of good pieces.  It is mostly about some wonderful birding at the John Heinz National Wildlife Refuge in Philadelphia, PA as part of my 50/50/50 Adventure.  I birded there yesterday starting on my own and then with a new friend Ned Connelly.  That story has to wait, though.  Today the birding was with a great group of birders/folks on the 7:00 a.m. Bird Walk led by Gregg Gorton – a super birder and an even more super guy.  And more on that later as well.

Let’s start with this:  “While riding a train in New York City in 1896, Henry Heinz saw a sign advertising 21 styles of shoes, which he thought was clever. Although Heinz was manufacturing more than 60 products at the time, Henry thought 57 was a lucky number. So, he began using the slogan “57 Varieties” in all his advertising.”   That Henry Heinz was the grandfather of Henry John Heinz III, best known as Senator John Heinz who died in an airplane crash on April 5, 1991.

Senator Heinz had helped preserve the Tinicum Marsh Refuge which was was declared a National Natural Landmark in 1965.  In November 1991, the name of the refuge was changed to John Heinz National Wildlife Refuge at Tinicum to honor the late Senator.  It is a marvelous place for birds and it was the focus of my visit to Pennsylvania seeking to find 50 species there in a single day. 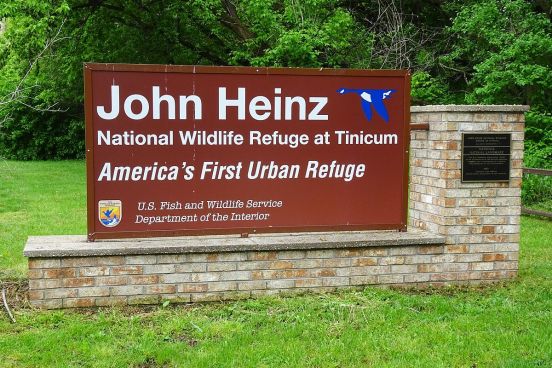 Since an essential and important part of my 50/50/50 Adventure is to interact with local birders in each state, I had contacted Bert Filemyr, someone I had met on my Tundra Bean Goose Chase and a big time birder in the  Philadelphia area, to see if I might be able to hook up with him.  Like many other birders, Bert was going to be in Magee Marsh while I was in Pennsylvania.  When I told him I would be able to satisfy my need for a local connection by joining with the John Heinz bird walk, he contacted his friend Gregg Gorton and told him of my project.  So when I met Gregg at the refuge before the walk, the stage was set for a great day.

And the stage was different than some of my other days attempting to get 50 species in a day because I had accomplished that the previous day birding first with Ned Connelly as I indicated at the start and then later on my own.  I had seen Ned when I arrived at the Refuge on Friday around 9:00 a.m. after a fairly early departure from Delaware and asked if I could tag along since I had never been there before and was unfamiliar with many of the bird calls and songs.  He welcomed me and we spent the next several hours together ending up with 40 species.  I had seen 5 other species just driving to the Refuge so with a total of 45, even though the plan had been to bird that day just for familiarity for the project day on Saturday, after lunch (with Ned at a very cool diner), I returned to the Refuge alone and following some advice from Ned, I picked up another 10 species and ended the day with 55.

Some good birds from the first day at John Heinz NWR with Ned included 12 species of warbler.  By far the most abundant species was Gray Catbird – maybe 50 seen and constantly heard. 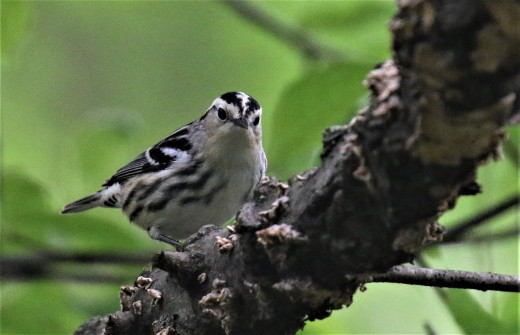 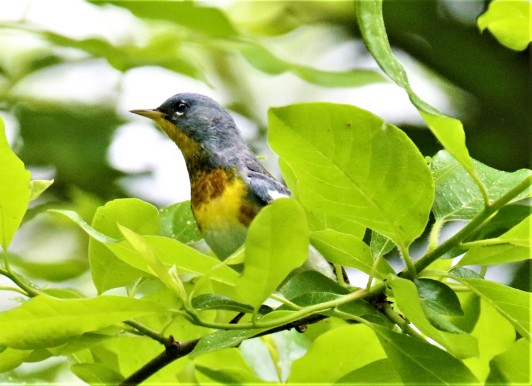 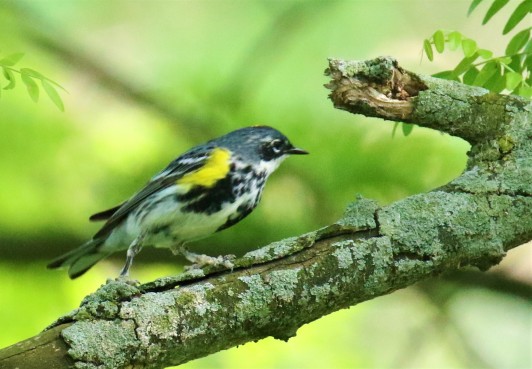 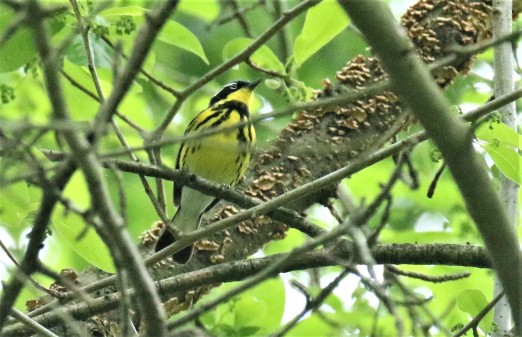 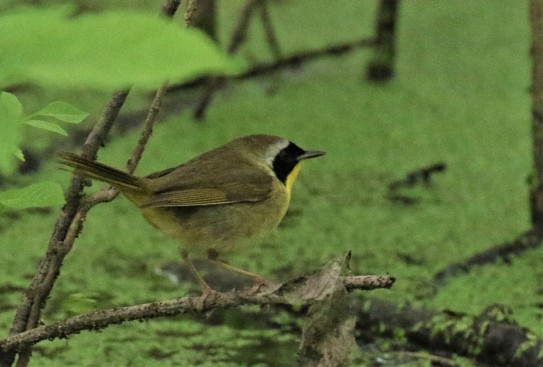 Northern Waterthrush – Right where Ned said it would be 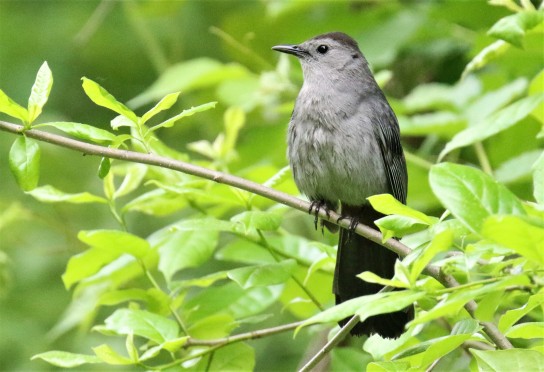 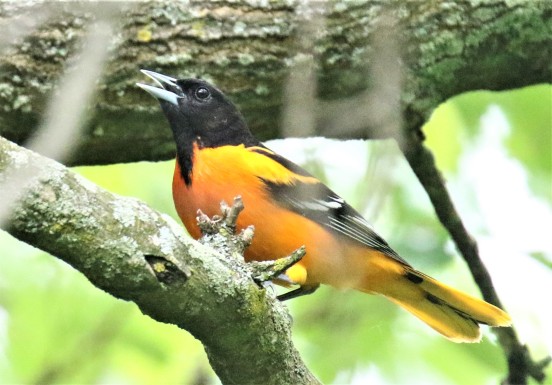 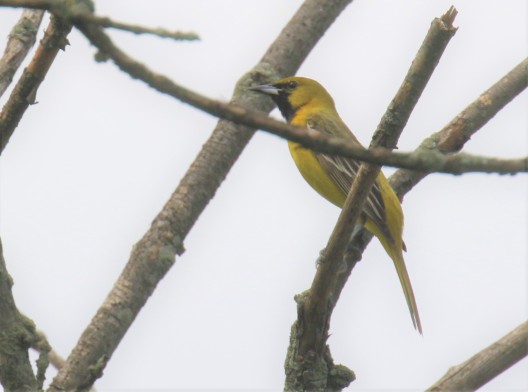 Considering that there were only two duck species (Mallard and Wood Duck) and a single shorebird species (Greater Yellowlegs), I was very pleased to get more than 50 species for the day.  But mostly it had been a great visit with Ned.  He has birded the refuge for decades and finds it especially fulfilling after having lost his wife not long ago.  He was full of stories and knew the Refuge and the birds well.  He was great company and reinforces how intersecting with local folks is such an important and rewarding part of this experience.

And that gets us back to Gregg Gorton.  A recently retired physician, Gregg was simply wonderful.  I had met other birders in the area before meeting him and they all told me how expert he was especially with bird songs and calls.  Dead on.  Like my friend Frank Caruso back home and Mike Resch who I birded with earlier on this trip in Connecticut and Rhode Island, Gregg had both fantastic hearing and a processor that knew every song, call and chip note.  Since this is my greatest weakness, I could not have had better company.  And there were great birders and great people in our group.  Gregg had told the group of my 50 state quest and they were all supportive and helpful and friendly.  It was a great team and we had great birds.  Many species were the same as with Ned or on my own the day before, although some of those were missed this day.  However, there were many new ones as well including 5 new raptors: Red Tailed, Red Shouldered and Cooper’s Hawks. Peregrine Falcon and Bald Eagle.  I also added two new warblers, Chestnut Sided and Black Throated Green although I missed two seen by others in the group, Canada and Bay Breasted Warblers.

I also had much better looks at and photos of our two vireos – Red Eyed and Warbling.   Some sunshine helped.

There are lots of stories I could add and definitely lots of thank yous to share, but it is late and I have to head off to Virginia early tomorrow, so I will add two quickly and then get to the close and to the story of the title of this post.   Two very fun sightings were of two little birds on two little nests,  The first was a Ruby Throated Hummingbird, the smallest bird in the East, and the second was a Blue Gray Gnatcatcher – not much larger. 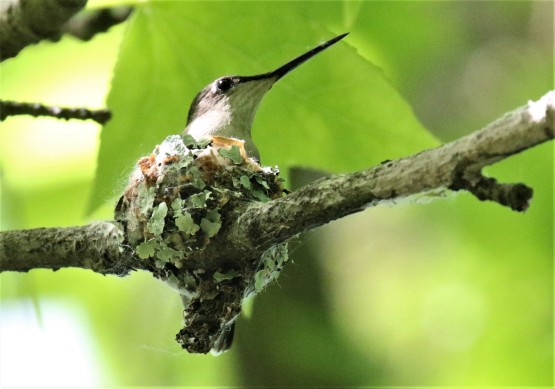 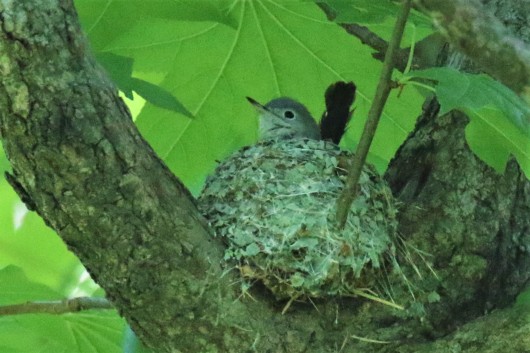 Coming to the end of our great morning after 5 hours, we reached the Pump Station on the Pipeline – a Hotspot within the Refuge.  A real-time messaging service is used by birders at Heinz telling of special observations.  Earlier there was a message that a Black Billed Cuckoo had been seen there.  Not only is this species a rarity for the Refuge, it also had special appeal to me as I had only seen them twice before – more than 40 years ago – and I did not have a photo.  I thought one might be possible later at Magee Marsh, but not here.   When we got to the Pump Station, Denis Brennan was there.  I had met him the day before with Ned, and Denis had seen the Cuckoo about 15 minutes earlier.  It had not been calling.  This is where being with a group of birders, especially good ones and motivated ones is really beneficial.  After diligent searching and great patience the Cuckoo was seen – high up in a tree and distant and blocked by branches.  I got a quick visual but no photo.  It moved.  Another view.  After much hide and seek I finally got a great look and a photo – and then an even better one.  The Black Billed Cuckoo was the 57th species I had seen that day at the Refuge – Variety 57.  Much more importantly the lifer photo was number 698 in the ABA area.  I should be able to get 2 or more additional ones on the remainder of this trip getting me to the magic number of 700.

That ended a wonderful day with wonderful birds, at a wonderful place with wonderful people.  Since Gregg had mentioned my quest to the others at the start of the trip, it had come up in discussions with many of them during the time together.  They were all so positive and encouraging and interested.  The birds are great but it really is about the people!!

[I have been traveling for almost two weeks now and this is the first time I have been able to post anything in these blogs.  There have been lots of other great stories and successes getting over 50 species in Connecticut, Rhode Island, New York, New Jersey and Delaware.  The success in Pennsylvania made that State #31.  Still a long way to go.  Still lots of fun ahead.  And I will eventually get to those blog posts…someday.]