This will be another relatively short blog post.  Had I either seen the Little Stint I chased in B.C. yesterday or if I wrote about my reflections on that experience, it would be much longer.  Cannot revise the missed observation yesterday but someday I may write up those reflections.  Not now.

What an extraordinary seven days of “local” birding it has been.  At least it is local in that there were only day trips; there was no travel by airplane or even to far eastern Washington; but many miles were covered with trips to Neah Bay, British Columbia, around King County and to Kitsap County.  The birding was all about chases to find targeted birds with no real attention to increasing species counts.  Most of the chases were successful, but there was the major miss of the Little Stint and then this morning, the Buff Breasted Sandpiper that had been seen yesterday at the mouth of the Cedar was not relocated, but there sure were some great successes.

All told, I saw 70+ species this week  – not a huge quantity but great quality.  The week started with no birding on Monday, but on Tuesday there was the Franklin’s Gull and the “not a Ross’s Gull” at Point No Point. That was followed with the extraordinary Painted Redstart on Wednesday at Cape Flattery.    Tufted Puffins at Cape Flattery were other quality observations.  Those events were detailed in my previous blog post.

No birding on Thursday, but Friday may have been even better than finding the Painted Redstart as I was able to find and photograph the LeConte’s Sparrow that had been discovered by Jason Vassallo at Discovery Park.  This was a Life Bird and was one I was hoping to see on some upcoming trips to the Midwest and to Louisiana later this year.  I never expected to have a chance in Washington.  Typically it is very much a skulker, and I got lucky – photographing it during the very few seconds it was in the open.  It was ABA Life Photo #690 – I was thrilled.

No birding on Friday either, but on Saturday I left very early to join a friend in B.C. and look for the Little Stint that had been seen at Boundary Bay the previous day.  For a number of reasons I am not going into details, but the bottom line was that after many hours of looking, I left and less than an hour later, the group found the Stint.  I returned but it had flown off and was not relocated while I was there for another hour plus.  I left again and 5 hours later it was found again.  Sure it would have been nice, but maybe I am finally maturing as it was not a great disappointment and took nothing away from the rest of my week.

The good news from that trip though was that there were some other nice birds.  One was a beautiful little Merlin that perched in a tree near our starting point at the foot of 96th Street.

Earlier before joining the group, I had a distant only look with two other birders of six Buff Breasted Sandpipers in a field west of 88th Street.  They were my first for the year.  This seems to be an incursion year as there have been numerous records on the Pacific Coast and 13 had been seen at this same field the previous day.  Lousy flight photo only, but I love this bird and include a photo from Washington some years back. 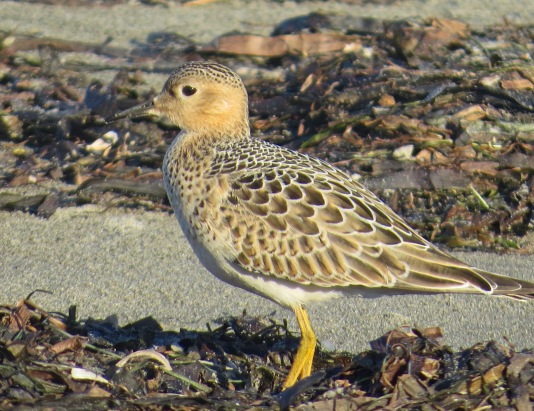 During the failed search for the Little Stint, I found a flock of 11 Baird’s Sandpipers.  I had seen them several times earlier this year, but these were close and in good light – two key components for good pictures. 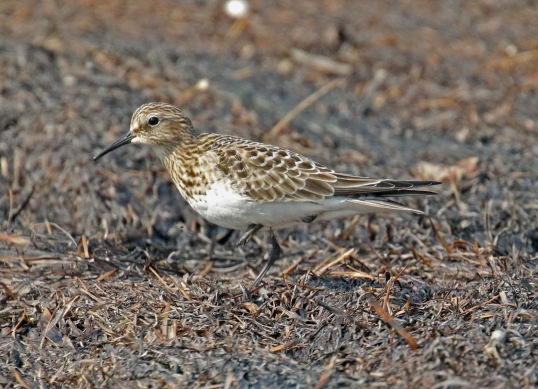 It did not result in a quality photo, but the B.C. birders, I was with were quite excited about a Snowy Plover that was found – pretty far away and in poor light but clearly identified in the scope views and this is an ID confirming photo.  They are very rare in B.C.  They breed in Washington but not there.

In addition to many hundreds of Western Sandpipers, Sanderlings and Black Bellied Plovers, other good birds on the extensive mudflats included a Stilt Sandpiper, Ruddy Turnstones and a Pacific Golden Plover.  I was also able to see a Great Tailed Grackle at Point Roberts.  Point Roberts is a weird deal – a little peninsula reached only through Canada but part of Whatcom County, Washington.  I had seen many in other states this year, but this was the first in Washington where it is extremely rare.

While I was up in Canada yesterday, a Buff Breasted Sandpiper was seen at the Mouth of the Cedar River in King County.  Hoping to add it to my year list in the sate, I went there this morning – no luck but great visits with some other birders and a nice view of a juvenile Semipalmated Sandpiper – a good county bird.  Since it was sort of on the way home, I detoured to West Seattle and found the rare Ruddy Turnstones that had been hanging out there and also found friends Jon Houghton and Bill Boyington who were watching the Turnstones as I arrived.  Not great light but a decent ID photo.  I was not aware of it until I got home, but this was the first Ruddy Turnstone I had seen in King County. 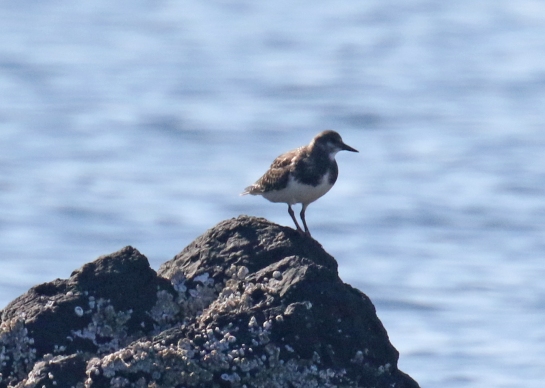 One more good bird for the day was a Parasitic Jaeger scoped way out in the Sound – almost to Vashon Island.  Again, a new county bird.

Had I seen the Little Stint, at least observation and rarity-wise it might have been my best week ever.  Still pretty close with the Painted Redstart and LeConte’s Sparrow with the other goodies included per the above.  Altogether I had 20 species of shorebirds and at least the following dozen quality birds.

A great week – bring on another.