This will be a relatively short post, but there was no way I could resist saying something about yet another amazing chase to Neah Bay.  Mid-afternoon on Saturday August 25th I got a rare bird alert from Ebird.  A Painted Redstart was reported from the Cape Flattery Trail near Neah Bay.  It appeared that the report might be from an organized tour group as there were 8 birders on the report – only three of whom were named – none familiar to me.  There was a photo of the view screen of a camera and there was no mistaking the identity of the bird.  Unless this was some kind of cruel hoax this would be the first record of this species in Washington.  It is one of the specialties sought after and regularly seen in Arizona.  There have been many sightings in California and some in neighboring states, but none ever even in Oregon.  This was big news.

I had seen and photographed a Painted Redstart in Arizona last year, but of course, this one would be a new State bird for me if I successfully chased it.  And normally, that is what I would have done.  Following Chase Rule Number 1, “Go Now!”, I would have left immediately for Neah Bay.  But this was not a normal day.  I was still barely into recovery mode from bursitis in my left knee (one of the consequences of the uncomfortable if successful San Diego Pelagic trip) and walking was just becoming possible.  It was questionable whether I could even make the long drive let alone the steep walk down and back up the Cape Flattery trail.  There was no way to get to Neah Bay in time for an attempt that day so it would have to be the next day at the earliest and it is often the nature of these kinds of aberrational rare visitors that they are “one day wonders” – seen one day and then gone the next.  Especially not knowing the observers, it was just too much of a long shot and risk.  I ignored Rule 1. 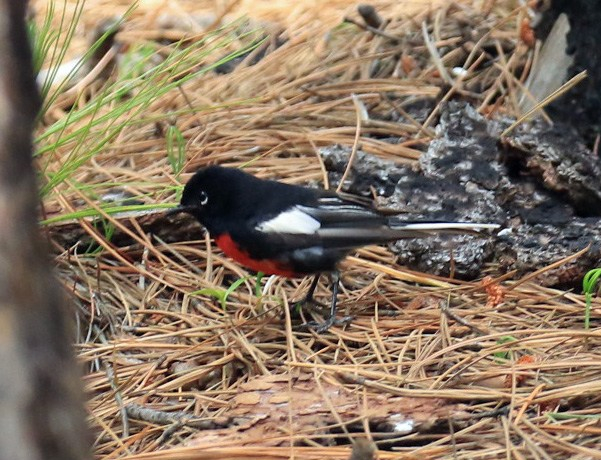 I filed the Redstart in a recess of my mind and went out birding the next day on a trial run – see how the knee held up – trying again, and again unsuccessfully – for the Franklin’s Gull at Point No Point.  No luck there but although it got a bit sore later, the knee was “better”.  I figured someone would go look for the Redstart and I would learn if it stuck around.  There were no reports on that next day.  Had nobody looked?  Or was it here today and gone tomorrow?  I forgot about it and took it easy on Monday – the knee continuing to improve as a result.

I had some personal matters to attend to on Tuesday the 28th that took me back over to the Point No Point area.  This time I located the Franklin’s Gull but had something far more interesting.  You need to understand the setting.  There are hundreds – maybe a thousand or more Bonaparte’s Gulls in constant motion at Point No Point.  Looking for the Franklin’s Gull is like looking for a needle in the haystack, but if you are looking at the right place at the right time, it is a relatively easy ID as it a tad larger than the “Boneys” and has a darker back and a dark hood.  Through my scope I found the Franklin’s and tried to get on it with my camera for a photo.  Aiming at what I thought was the right spot, i viewed something in the camera that caused my heart to skip a beat.  It was a small gull with a VERY distinctive black collar ring and a small black bill.  Although I had only seen one – a mega rarity on December 21, 2011 at Palmer Lake in north central Washington, I immediately thought Ross’s Gull because of the collar.  I took a number of photos as it continued to fly by at least 150 yards out.   Unfortunately it turned out to be a very strangely plumaged Bonaparte’s Gull – but before studying the photos and finding some “incorrect” fieldmarks, it sure was exciting.  It would have been incredible as a Ross’s Gull is like the Holy Grail to many North American birders!!  Still a lot of fun.

A Real Ross’s Gull (left) and My Attention-getter (Right) 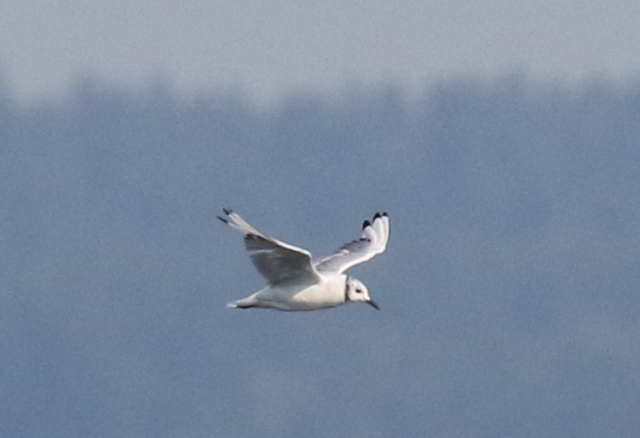 There were no new reports from Cape Flattery on the 27th and then when a report of a Northern Wheatear with a great photo came in from Mt. Rainier on the 28th, I thought about chasing it.  I had seen one in Washington in 2012 and several in Nome in 2016, but they are very rare in Washington – certainly a great year bird for the state and the ABA.  Then it happened – another report from Cape Flattery .  The Painted Redstart had been refound by an “Anonymous Ebirder” that morning.  No way to know who it was or how credible was the report but a horrible photo was included – enough to confirm the identity.  The knee was feeling close to normal so I decided to leave early the next morning, repeating a Neah Bay ritual that had been very successful numerous times.  The chase was on.

I caught the 5:35 a.m. ferry from Edmonds, negotiated the often very windy road without much competing traffic (the log trucks were all coming East as I headed West) and arrived in Neah Bay around 9:00 a.m.  It was another 20 minutes to the Cape Flattery trailhead – and what had been a somewhat overcast day now included some heavy mist – almost rain.  This would not help the search for a bird that favored the treetops.  There was another car already at the trailhead lot and I was hoping it would be another birder and that at the end of the trail – near the picnic table where the Redstart had last been reported, I would find a birder looking at the rare bird who would point me in the right direction.  But there was nobody else on the trail and it was pretty dark and gray.  This might be a long haul – maybe even a futile one.

I played the call and song of the Painted Redstart a couple of time as much to familiarize myself with them as to lure the bird in, although that sure would have been nice.  It was very quiet – until about 5 minutes later when I heard someone approaching down the trail.  He had a telescope and binoculars – another birder!!  Reinforcements.  It was Keith Brady, an excellent birder from the Olympia area.  Keith is right near the top of the list of birders with the most species seen in Washington.  After the second Redstart report he could not pass up this opportunity either.  We immediately joined forces.

In most circumstances, I have pretty good hearing although more often than I would like, I am unsure of what bird is making the call that I hear.  Keith’s hearing put me to shame as he began hearing Golden Crowned Kinglets in the treetops in the distance when I heard nothing.  This was important because the Painted Redstart had been seen associating with Kinglet flocks on the two occasions it was reported.  We  got fleeting glimpses of a couple of Kinglets, but nothing else.  After maybe 30 minutes, we heard an unfamiliar “call”.  It sure sounded like the two-toned (or to me closer to one and a half tone) “cheree” call of our target.  We heard it a couple of times and then high up in a cedar we found several Kinglets and a larger bird with white in the wing, large white edges on the tail and indeed a bright red belly and breast.  With pointing assistance from Keith, I had it!!

The Painted Redstart flitted around and moved over to a fir tree in the poor light.  It was in the open just enough to get a couple of great views and then would fly off – almost like a flycatcher and land mostly out of sight.  I tried to find it with my camera but with the gray sky and low light and fogging on my view finder, it was a challenge.  I aimed in the right direction and hoped for the best.  The best turned out not to be great, but it was good enough – no mistaking this fellow.

We watched in amazement for several minutes getting partial views at best and then it disappeared.  High fives with Keith – two jubilant birders.  We then went over to the observation deck and scanned Tatoosh Island and only because Keith had brought his scope were we able to see Tufted Puffins in the grass and diving off the cliffs to go fishing – around 20 in all.

We returned up trail to try again for the Redstart.  On a couple of occasions we heard its rich full song – a complete surprise.  It was further off and after it came no closer during the next 10 minutes, I departed.  I don’t know if Keith, who remained for awhile, got additional looks.

As a bird flies, it is over 1500 miles from Cape Flattery to this bird’s regular breeding habitat in Arizona.  It migrates from Mexico where it generally spends its winters.  What was it doing here?  As a first state record, obviously it is way out of place and there is no way to know what quirk of fate or genetic aberration sent it to us.  I have written often about the incredible rare birds seen at Neah Bay (a few miles from Cape Flattery).  In the past two years there have been two other first time Washington records at Neah Bay for  what are normally Arizona birds.  Last year, there was a Zone Tailed Hawk on November 6th and in 2016 there was a Dusky Capped Flycatcher on November 21st.  Is there a pattern?  If so a late August visit for the Redstart seems really out of place.  Maybe these earlier visitors liked it here and are spreading the word.  What will come next?  I hope I get a chance to find out.