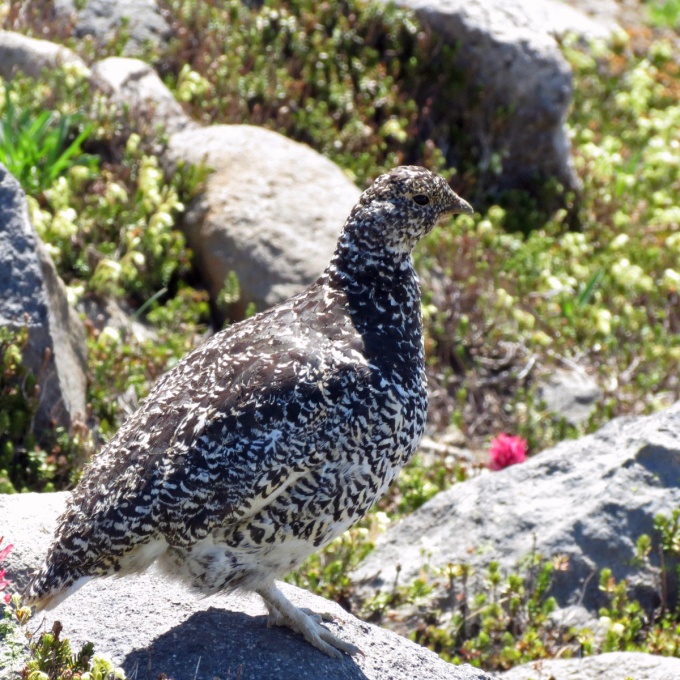 Ptarmigan are grouse with feathers covering their toes and are found in the mountains or cold northern regions.  Three species are found in North America: Rock Ptarmigan, Willow Ptarmigan and White Tailed Ptarmigan, with the latter being the only one found in Washington.  Although not an endangered species, the general consensus in Washington, is that their numbers are declining.  My experience and that of birding friends would agree as we have found it more and more difficult to find this high elevation species.

My first White Tailed Ptarmigans were seen in my mountain hiking and climbing days in the early 1970’s.  I recorded my first one at Sunrise at Mount Rainier in July 1972.   We did not think of them as uncommon then.  I did not keep further records after that first sighting but recall that several were seen when I climbed Mount Rainier starting from Paradise in 1974 and on other climbs there and at Mount Baker.  I started keeping detailed records again only in 2012 and saw one on the Mount Fremont trail out of Sunrise in October 2013 when I got my first photo of this species. Two were seen at Artist Point on Mount Baker in July 2014 and then despite several attempts to find another one one in Washington in 2015 through 2017 – none.  Others I know had a similar experience. 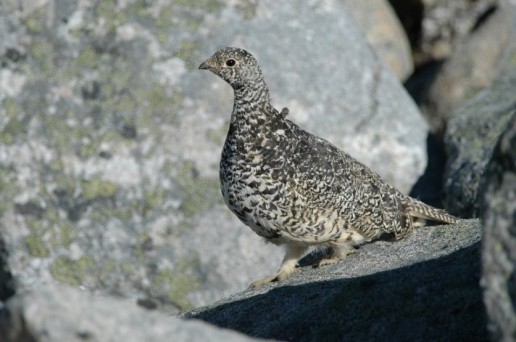 However, on my great “Chickens” trip in Colorado with High Lonesome Tours in April 2016, our group observed two at Loveland Pass.  Like many birds, all species of Ptarmigan have distinctly different plumage in winter and summer.  For the Ptarmigan this is a matter of survival via camouflage.  In the winter, they live in areas completely covered by snow while in the summer the snow has melted and their territory is Alpine meadows and rocky fields.  Our Colorado birds were almost pure white, making them almost impossible to see by us and by their predator enemies.  Their only color was the black of their eyes, beaks and toes and a rarely seen swash of red over their eyes. 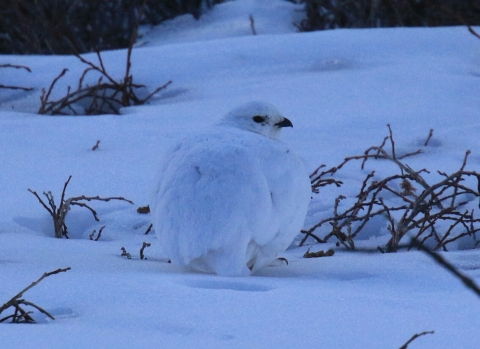 That was the only other White Tailed Ptarmigan I have seen – until today – finally.  Birding friend Jon Houghton has been travelling much of this year, and now back from yet another trip to Alaska, he let it be known he was game for some birding in Washington.  I saw a report on Ebird that a mother White Tailed Ptarmigan and some chicks had been seen on the Sunrise Rim trail at Mount Rainier.  Jon is an avid hiker and I knew he would want to see a White Tailed Ptarmigan, so it was a perfect opportunity to see him and maybe see a much sought after bird.

I am in better shape than I have been in for some time, but I am not mountain hiking tested at altitude.  This would be a moderately arduous hike and I was curious how I would do.  Of course, I wanted to see the White Tailed Ptarmigan but no matter what, at this time of year Mount Rainier is spectacular and it would be a great visit.  We left Edmonds a bit after 6:10 a.m. and with lighter than expected traffic and after a few stops we arrived at Sunrise at Mount Rainier three hours later.  It was a gorgeous day, sunny but not too hot – perfect conditions. 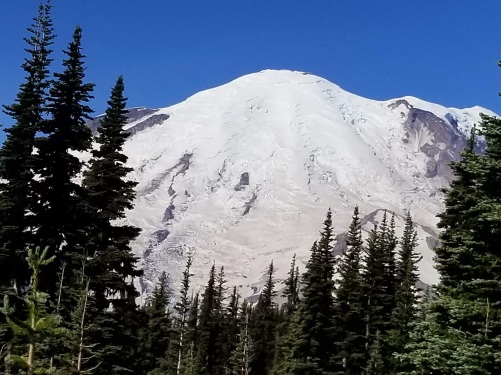 The picnic area closest to Sunrise was quite birdy, with lots of Pine Siskins, Cassin’s Finches, Hummingbirds, Mountain Chickadees, some Chipping Sparrows, Dark Eyed Juncoes and a spectacular Mountain Bluebird.  We also heard the “Quick three beers” call of an Olive Sided Flycatcher.  But as we left that area and started our steep climb on the trail that leads to Frozen Lake and then splits to go to both the Fremont Lookout and Burroughs Mountain, the birds disappeared.  The sun was out and the sky was brilliant.  At a couple of open areas, the wind blew and it was quite chilly, but with the exertion of the hike, we both removed layers and we could not have asked for better weather – or better views – or better wildflowers. 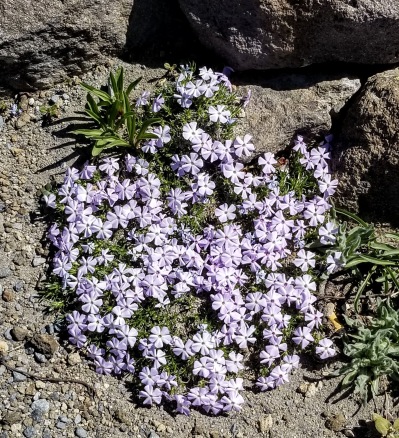 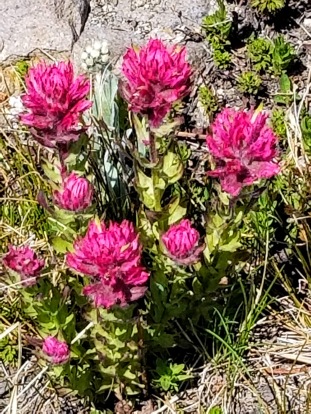 Finally we got to Frozen Lake and headed up to First Burroughs – a very steep climb.  We made several rest stops along the way – scanning the meadows and rocks hoping for a Ptarmigan but no luck.   When we made it to the large meadow at the top of First Burroughs, we decided to head back to Sunrise on the Sunrise Rim trail rather than to continue on up to Second Burroughs, another steep hike.  This was the area where we thought the Ptarmigan had been reported earlier, but the details were a bit hazy.  I moved a bit ahead as Jon was much more thorough scanning the hillsides.  Maybe a quarter of a mile down from the junction with The Burrough’s Mountain Trail I saw a movement on the trail maybe 25 feet ahead.  Thank goodness for that movement because otherwise, even though they were right in front of me, I might have missed them as they were perfectly camouflaged.  I yelled for Jon who hustled down to see what the ruckus was.

There they were just off the trail – our prize – a mother White Tailed Ptarmigan and her chicks.  All the huffing and puffing on the climb was immediately forgotten.  We gave each other high fives and watched the mother and babies – grabbing photos with our phones and cameras as best we could.  Other hikers came by and we showed them these rare birds of the Alpine tundra.  Even as non-birders they were captivated. 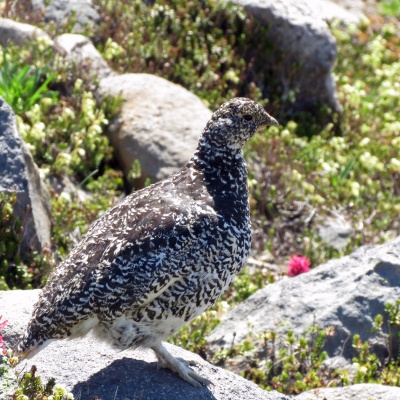 These birds are very tame – not caring at all about people.  I think their camouflage gives them comfort and security.  The chicks were scurrying about – sometimes right next to mom but often as much as 50 or more feet away.  We counted 5 for sure and think there my have been 6.  Either way, this was as many White Tailed Ptarmigans as either of us had seen in total in our lives previously. 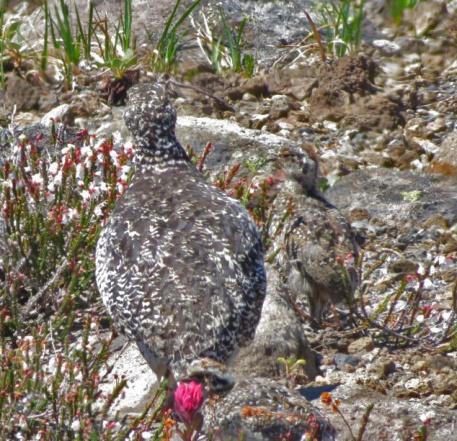 We watched for quite awhile and then continued down the trail.  It is much easier on the lungs and heart going down, but much harder on the feet and legs as the trail is both steep and slick with small pebbles and loose dirt.  We had to be careful not to fall.  Until almost to the end of the trail, there were no more birds, but the scenery and flowers were magnificent. 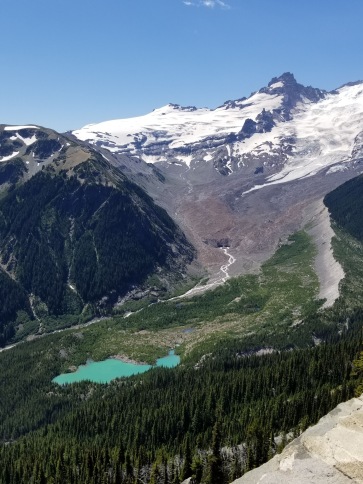 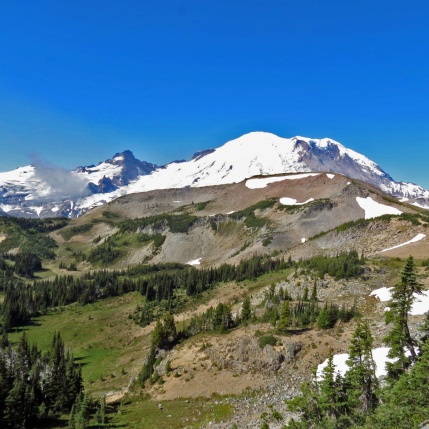 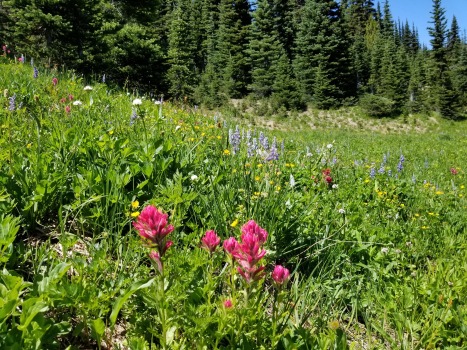 After lunch at Shadow Lake, we returned to the trail.  Just over a half mile from Sunrise, Jon heard booming from a Sooty Grouse and called me over.  It sounded like it was close.  But as we moved in for a possible look, it sounded just a bit further off.  This continued for at least a hundred yards and finally we found a small copse of trees that “had to have our grouse”.  But try as we might we could not find it as the booming continued, now quite loud.  Finally Jon spied it hidden in the branches almost at the top of the tree – at least 40 feet up.  You have to look real hard, but you can make out the bill, head and chest in the poor photo below. 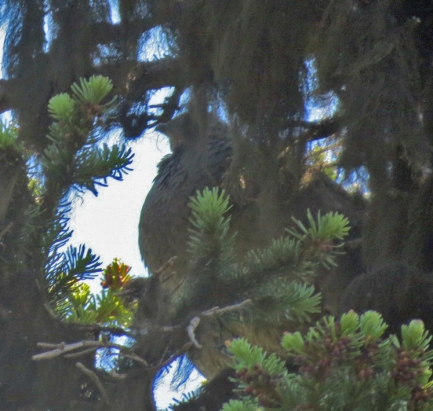 At least we got a photo.  While we tried to zero in on the Sooty Grouse I heard the “teu, teu, teu” call of a Pine Grosbeak. I got a brief view as it flew off – larger than the finches and dark red but I never saw the bill.

We made it back to the parking area exhausted but happy.  The Ptarmigan was the prize and the Sooty Grouse was new for the year for Jon and the Pine Grosbeak was new for both of us.  A most excellent day.

And just for the record and because they are so spectacular, here are the other two Ptarmigan species in North America – both seen in Nome Alaska in June 2016. 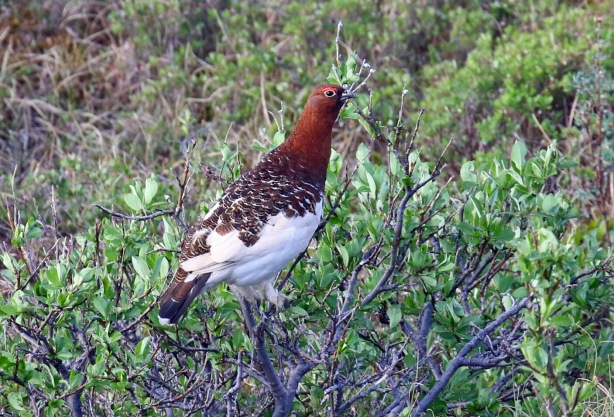 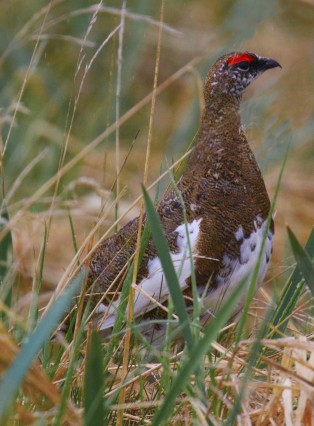 These birds are in their summer plumages.  In winter they too are solid white – invisible on the snow fields they live in then.

2 thoughts on “Finally Another Ptarmigan in Washington”