I got a fun video of my grandson from my daughter this morning.  He is almost 5 months old now and I can’t wait to see him again when I visit Boston for Thanksgiving.  Although my daughter is great at sending photos and videos, I wish I could be there to see each little developmental step.  They seem to happen every day.  I look forward to reading to him and to playing with him as he grows up.  Seeing the video today brought to mind some of the games kids play – or at least used to before cell phones and video games.  Being a birder, the old game of “Duck, Duck, Goose” was one that came to mind.  When I checked my memory of the rules on the internet, I was surprised to find that there is a Netflix  Animated Film of that name.  I can’t say I loved the 2 minute trailer and sure could not tie it to the children’s game.

The game itself, a version of “tag – you’re it” is quite simple:  the players (5 or more sit in a circle) facing in except for “the Goose” who walks around the circle tapping one and then another on the head and pronouncing each to be a “Duck” until he or she taps one and calls out “Goose”.  The tappee chases the tapper around the circle and tries to catch and tag him or her before he or she can sit down and take the tappee’s place.  This continues until everyone gets bored and loses interest.  Come on, admit it, you played it once and thought it was fun back then.

I was in the mood to write something today, and again being a bird nerd type, a “Duck, Duck, Goose” blog post came to mind  – three sets each of two ducks and a goose.  The first set of three are two of the rarer duck species I have seen in Washington and the rarest goose species.  The second set excludes those and is of species that I find the most beautiful and includes a goose species I have not seen in Washington State.  The final set is my dream set, the two duck species and the one goose species that I would most love to see in the ABA Area and hopefully in Washington State someday.

Tufted Duck  –  I have seen at least one Tufted Duck in Washington every year since 2012 except for 2017.  I have seen both King and Common Eiders in Washington and both are rarer than the Tufted Duck, but in each case the visitor was a drab female and the photos not real striking.  Many years ago, in 1983, I also saw the much rarer Steller’s Eider that was seen at Point Wilson.  I wasn’t taking photos back then – hope another one comes to the state someday and I see it with my camera ready.  The photo below is from the Sewage Treatment Ponds at Neah Bay in 2016.  We also found a female Tufted Duck there at the same time.  Tufted Ducks are common – even abundant in Europe. 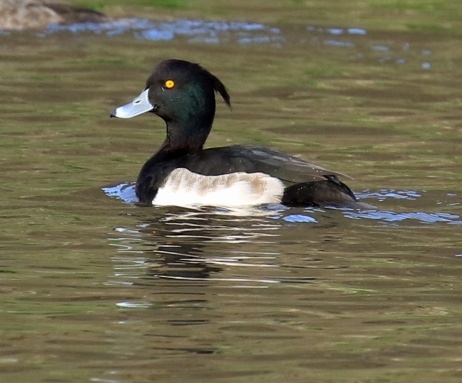 Falcated Duck – This was one of the prize birds in Washington in 2017 – a mega rarity.  It was found by Rick Klawitter in among many hundred Wigeon on Padilla Bay on January 15th.  Many of us made the trek to look for it the next day.  It was very hard to pick it out with so many Wigeon – at least 500 plus, but we finally found it and I was even able to get a distant photo.  It is a mega rarity anywhere in the ABA Area.  It is a bird of Siberia and East Asia.  I believe this was the fourth Washington record.

Emperor Goose – The Emperor Goose is another quite rare bird.  One is seen in Washington most years and I have seen one in the State in 2012, 2013, 2014, and 2016.  My first observation was on the golf course in Ocean Shores where it hung out with a Greater White Fronted Goose for two months in 2012.  The others were all seen around Sequim.  It is breeds in Siberia and Western Alaska.

Wood Duck – It is not uncommon but it is sure gorgeous.  It would be hard to rank the Wood Duck below any other for sheer beauty.  I have more than 80 observations in Washington and have also seen them in California, Oregon, Wisconsin and British Columbia.  Earlier this year, I met an avid birder from Columbia birding at Juanita Bay Park.  It was her first visit to Washington and her main quest was to get a photo of a Wood Duck. 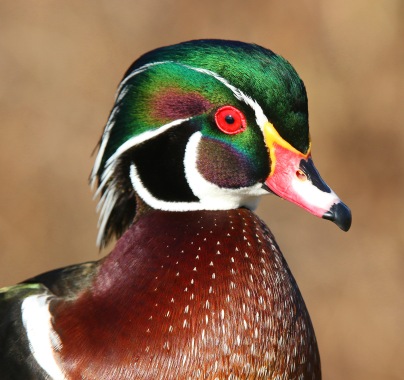 Common Eider – After returning from a chase to find the Common Eider at the Purdy Spit in January in 2017, a non-birding friend asked why it was such a big deal and I told her it was only the second one I had seen in Washington, the first being at Westport on October 28, 2012, the double rarity day as there was also a Northern Wheatear a few hundred yards away.  She couldn’t understand then why it is called a “Common” Eider.  It is in the other places I have seen them – Alaska, Maine and Massachusetts, but certainly not in Washington.  There may be some other duck species I have seen that are equally beautiful, with the Hooded Merganser definitely ranking high for example, but I chose this one because I have seen them (drab females only) in Washington and because I think they are very distinctive and beautiful.  I might have gone with the King Eider – also seen in Washington – but my photos are only of the once again drab females.

Pink Footed Goose – This was a tough choice mostly because I have not seen that many goose species in Washington and did not want to pick the abundant Snow Goose, Brant, Canada Goose or Cackling Goose even though they are all fine looking birds.  And the much rarer Ross’s Goose just doesn’t do it for me.  The proportions are all wrong.  I decided to go with the Pink Footed Goose with its pink feet and rusty head and neck.  I could not find any Washington records for this species but I have seen it in two places the first at Artichoke Reservoir in Massachusetts in November 2016 and the second in Victoria, B.C. in March 2017.  They breed in Greenland and Iceland but migrate to Northwestern Europe for the Winter.

Smew – Anyone who knows me well as a birder knows that at the very top of my bucket list is seeing a male Smew.  One appeared in Washington on the Columbia River in the winter of 1991 and again in 1992.  That was my down time for birding so I missed it.  They are mega-rarities in the ABA area with most being seen in the Western Aleutians.  They are found primarily in Northern Europe and Asia.  This is the ONLY bird that I will drop everything and go chase if a male shows up in North America again.  I have my fingers crossed.  It is a small merganser and although only black and white, to me is a simply gorgeous bird. 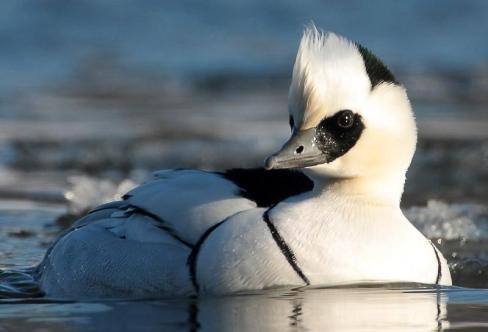 Baikal Teal – There were numerous observations of a Baikal Teal from December 2004 to April 2005 in South King County.  Unfortunately I was not one of the observers.  It has to have one of the most unique facial patterns of any duck.  It is most often seen in Alaska although there was a 2013 record from Montana.  There is always a concern whether birds seen in the U.S. are escapees since they are found in many collections.  I found a report on Ebird from Stephan Lorenz – a guide who I was with on a Colorado “Chickens Tour” with High Lonesome in 2016 – of 50 of these ducks in Japan.   I was there at the wrong time of year – I wish I had seen one – but of course I really wish another one shows up in Washington or at least nearby.

Bar Headed Goose –  There are no records of this species in Washington and it is a mega-rarity if it ever shows up anywhere in the U.S.  It is fairly common in India and elsewhere in Asia.  I saw a small flock on my trip to India in 2011.  Pretty simple and straightforward except for those bars on the head.  Maybe someday.

This blog post is probably as far afield as any I have done.  As I said at the outset, I just felt like writing – probably since I did not get out birding today – the mid July blahs.  Hopefully some good shorebirds will start showing up.  I need to get out there.