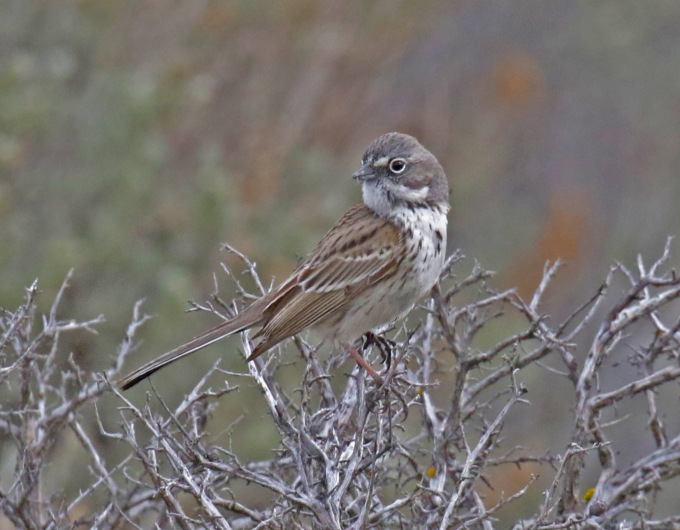 While I was in Southern California chasing Boobies, Pipits and Bell’s Sparrows, I read reports from back in Washington that some of the species found in our sagebrush habitat were returning and being reported.  Foremost among them was the Sagebrush Sparrow, the species that was split along with the Bell’s Sparrow from what had been known as the Sage Sparrow.  With the Bell’s Sparrow identification fresh in mind, I wanted to see some Sagebrush Sparrows for comparison.

Time for a field trip.  Frank Caruso, Ann Marie and I set off to meet Deb Essman in Ellensburg after a stop in Cle Elum along the way.  It was not real birdy at some of our stops but we had a cool highlight of seeing a Pygmy Nuthatch, a White Breasted Nuthatch and a Red Breasted Nuthatch all in the same tree.  Would have preferred a White Headed Woodpecker – but not bad as a consolation.

Before heading to the Sage Steppe area, we checked out some birdy spots near Deb’s home, starting with a shed across the street where we found a rather intense Great Horned Owl.

About a mile away Deb showed us a pond where two almost pure white Canada Geese were hanging with regular Canada Geese and a number of ducks.  They were very close to being wholly albino with pink eyes, pink feet and pink bills.  The only coloring was a hint of of beige on their necks.  So I guess they are leucistic and not albino but something we had not seen before.  I also found another Great Horned Owl roosting just before the pond. 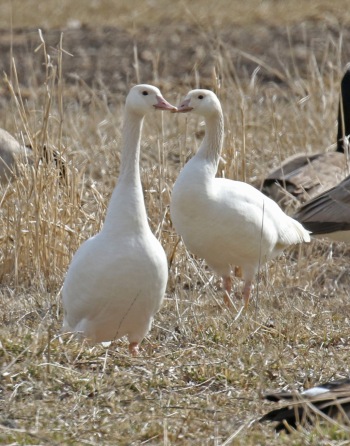 We failed to find a Blue Jay that had been reported in the area but Deb had promised us a Peregrine Falcon and she kept her word as we found a young Peregrine near a feedlot that had lots of doves, sparrows and blackbirds to keep it well fed. 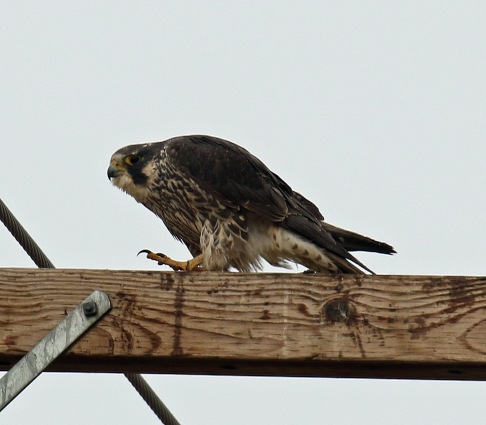 Now we were off to the Sage Steppe area along the Vantage Highway and into Gingko State Park with our first stop at the boat ramp at the end of Recreation Road.  One of our target birds was a Say’s Phoebe.  A few had been reported over the last two months elsewhere in Eastern Washington and this month some had shown up at Gingko.  We found our first one coming into the visitor center parking area and then right on cue, another one responded to our calls and came in and perched on its favorite spot – the tank just above the boat launch.

This is also a great spot for Rock Wren.  Frank’s great ears picked up a partial call and Deb spotted it.  With some encouragement, it came in for great views and photo ops.

We then worked our way west onto the Vantage Highway searching for our main quarry the Sagebrush Sparrow.  A couple of miles up the road, I saw a sparrow fly across the road and pulled over.  Frank picked up a faint call and I used play back to bring the bird to us.  It was a Sagebrush Sparrow and it was very protective of its territory giving us many good looks and a full repertory of calls.  We heard one or two more in the area.  Later we found several more at other stops further west. 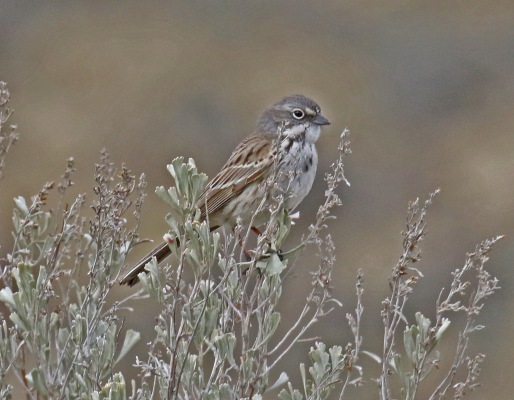 I was very pleased to be able to get great looks and photos that made it very easy to note the differences between the Sagebrush Sparrow and the Bell’s Sparrow.  The former has clear streaking on its back and a relatively light black malar stripe while there are no streaks on the back of a Bell’s Sparrow and the stripe is darker. 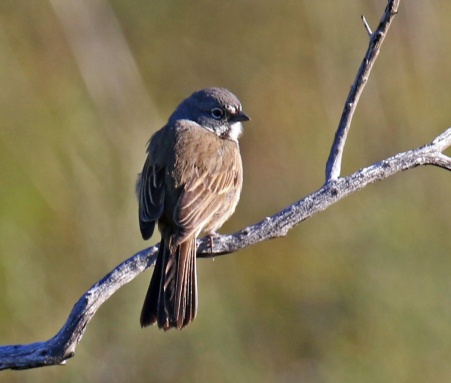 Note the differences in this compilation/comparison. 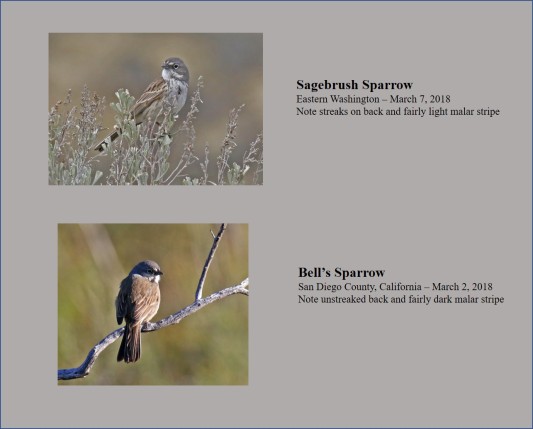 A bit further west we found two Mountain Bluebirds perched on a wire thus completing a successful search for all of the species we were seeking.  We tried a favorite spot in the sage hoping for some early Sage Thrashers or Vesper Sparrows but still too early.  Guess we will have to return.

There were two more treats as we continued back to Ellensburg – a beautiful Prairie Falcon – first posed on a power pole and then flying off at great speed and interacting with a Northern Harrier and then our first and only Shrike of the trip.  We hoped it might be an early Loggerhead Shrike but just a Northern – a very noisy one which made it extra fun to watch.

We had “only” fifty species for the day, which was not bad but the quality was great and more importantly we had a lot of fun together.

One thought on “Into the Sagebrush”