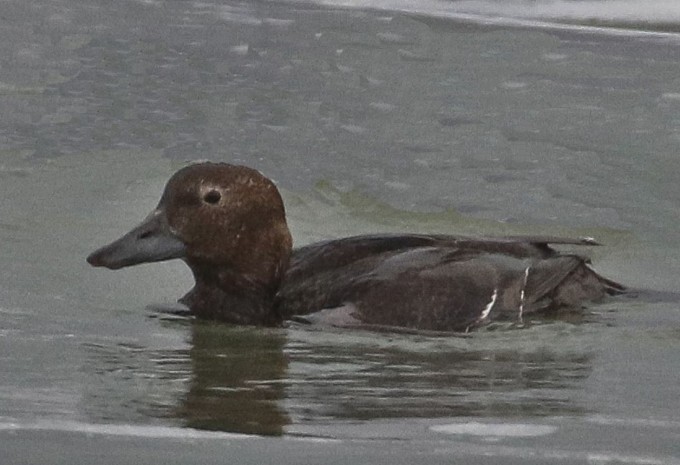 As I looked at the morning of Thursday January 25, I was feeling good about passing my goal, but even though the successes earlier that day had outweighed the failure of finding the White Wagtail on the previous day, I still felt like I wanted to end my “project” on an up note.  I considered going back to Neal Road to see if just maybe the Wagtail would return but if it had not more hours of standing around would compound the negative feeling.  I felt positive though and thought I would use that good feeling to try to make up for another miss.  I decided to look for a Gray Jay at the Stevens Pass Ski Area – atoning for missing them in the Okanogan.

I had never been to the ski area before and I was definitely out of place as I walked among the hundreds of skiers and snow boarders – looking for a bird and playing the Gray Jay call on my cell phone – and armed with some potato chips to entice a Jay closer if I found one.  I had walked around for maybe 20 minutes and had seen only a single Raven.  I saw someone with first aid gear who looked official and assuming he was a regular, I questioned him about whether he had seen any on the mountain.  He said they were common at the top of the lifts and would eat right out of the operator’s hands.  As I was considering whether that was an option, I saw a medium size bird fly into a pine near one of the buildings.  I thanked the guy for “helping me find one” and went off to try to get a better look.  It flew off but I was able to follow it and get a good look and a reasonable photo.  Happy, I started for the parking lot.  And…on the way two Gray Jays flew in close and I got a MUCH better photo.  I was now at 203. 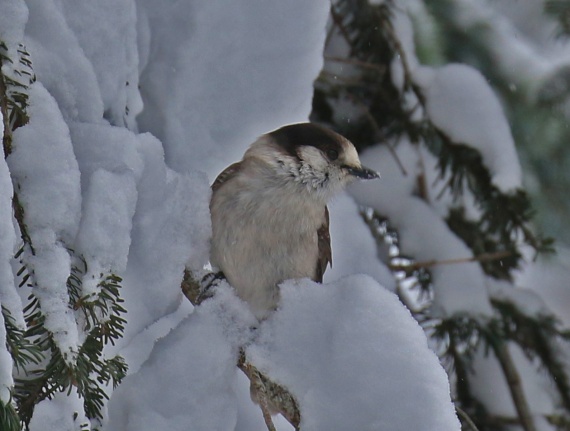 On the way home I checked Ebird for any exciting reports and there were none – until I pulled into my garage and saw that indeed the White Wagtail had reappeared .  It was too late for a reasonable attempt but I determined that would be my quest the following day.  So joined by Sherrill Miller and Frank Caruso, it was back to Neal Road the following morning.

To make a too long story short, it took over four hours to finally get a view – fleeting but definite of the White Wagtail.  We finally had moved over to the 19th Avenue viewing spot and that was the key.  It flew in and perched for only a few moments – just long enough to get an ID quality photo.  A White Wagtail is a prized bird south of northern Alaska – very rare in Washington – and while yes it was species #204 for my Big Month, more importantly I now had a photo of one in Washington – my 403rd such in the state and now there were only 11 species in the state I had seen but not photographed.  Frankly I had never expected to remove this one from that list.

January 27th – now what?  Go to the Coast for shorebirds or – really Blair? – back up to Skagit County and try yet again for a Gyrfalcon or American Pipits.  How about both?  I hatched a plan.  I would give the Gyrfalcon ONE MORE TRY and then the next day I would do something I had put off  for too long – I would head down to Seaside, Oregon and try to get a photo of the Steller’s Eider that had been there for several weeks now.  It wouldn’t count for my Big Month – wrong state – and it would not get my “photos missing in Washington” list down to 10 – again the wrong state.  But it would be a new ABA Life Photo – one that was not at all likely ever again unless I returned to northern Alaska.  And if I were lucky, I might be able to hit the Washington Coast and try for Semipalmated and Snowy Plovers.

Back on Fir Island, I was torn between looking down on the ground for Pipits or up in the trees and poles and the sky for a Gyrfalcon.  I went to places I had already been numerous times this month and just as in each of those visits – no Gyrfalcons and no Pipits.  Then I noticed some movement of smaller birds in a field at the corner of Maupin and Fir Island Roads.  The birds were shorebirds – a mix of Dunlin and Black Bellied Plovers, 40+ of the first and 70+ of the latter.  Suddenly as I was taking photos, there was pandemonium and all the birds took flight.  This generally means a raptor is around and in a flash a large falcon strafed the group and picked off a Dunlin.  It was a young Gyrfalcon – powerful and very fast.  I could not get on it as it flew off with its prize but FINALLY I had seen one of the Skagit Gyrs.  I continued my birding still hoping for some American Pipits or maybe refinding the Gyrfalcon.  No luck – but Gyrfalcon was no longer on my “missing” list.  Instead it was #205 for the Big Month.  I also just simply enjoyed looking at the “regular” birds of the area – Trumpeter and Tundra Swans, Bald Eagles and Snow Geese.  The numbers there are amazing. 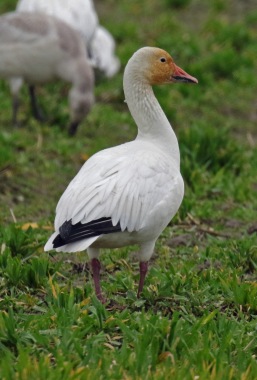 It is about 210 miles from my Edmonds home to the Steller’s Eider’s temporary home in Seaside, Oregon.  Just under 4 hours.  On the morning of January 28th, I left early – just about 5:00 a.m. and hoped to get there around 9:00 and hopefully find the Eider by 10:00 – leaving me time to get to the Washington Coast, but I was ready to remain in Seaside as long as it took.  I had excellent instructions from Melissa Hafting who had seen the Eider earlier this month.  I parked and walked to the beach, looking for the transmitter antennae that marked the area where the Eider had been hanging out.

It took less than 2 minutes – the first bird I saw was the Steller’s Eider – close in and associating loosely with a small group of Surf Scoters.  Somehow after the long wait(s) for the White Wagtail, this seemed “only fair” although I knew it didn’t work that way.  I took a few photos, watched for a couple of minutes and left.  I gave a well received “thumbs up” to birders who were heading out to the spot hoping for the rarity.  I would have plenty of time for the Washington Coast although there was still another two hours of driving to get there.

The route from Seaside to the coast took me across the mouth of the Columbia River over the Astoria Bridge.  It is astounding just how wide the river is – an impressive sight.  My first thought had been to drive directly to the Warrenton/Cranberry access road to the beach.  Driving on the open beach – something I always enjoy would hopefully get me one or both of my targeted Plovers.  Since I passed right through Tokeland, I decided to first take the small detour down to the Tokeland Marina to see it any Willets were around.  This is the “go to” spot in Washington for them – at least in the summer and fall.  I had already seen one – barely – in Sequim earlier in the month, but it would only take maybe 30 minutes.

At the Marina I quickly located two intermixed flocks of shorebirds – 19 Willets (the most I had ever seen) and 14 Least Sandpipers.  Again neither was new for the month, but these were superior views and superior photos. 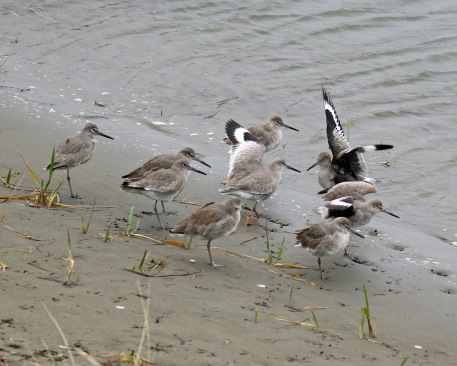 There were also quite a few gulls in the Marina – nothing special.  AND – there were also two Grebes with long necks.  One was clearly a Western Grebe – black of the cap completely enclosing the eye and a greenish bill.  The other – completely unexpectedly – was apparently a Clark’s Grebe – the eye outside (almost completely) of the dark of the cap and a bright orange bill – a new bird for the month.  Visiting the Marina was a good decision resulting in #206 for the month. 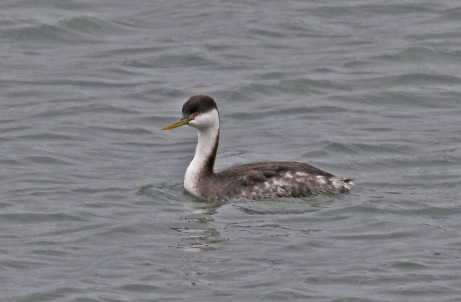 I hit the beach and began my search for shorebirds.  There were two problems.  First the tide was fairly low, so there was a lot of beach, and second it was VERY windy with sand blowing all around.   I found small groups of Sanderlings and Dunlin quickly but no plovers.  I then drove as far south as I could go and found a single Snowy Plover flying fast in the heavy wind.  There was no hope for a photo but this really is a favorite little bird so I include a photo from the same area from a wind free earlier visit. 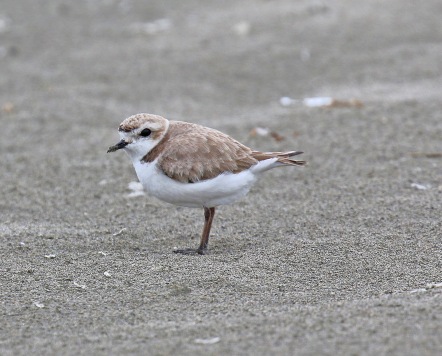 I turned north and when I hit some water that was a bit deeper than I wanted to challenge, I returned to the highway and then came back to the beach from a more northern access point.  Now I found hundreds of shorebirds on the beach – a small group of Black Bellied Plovers and 400+ Sanderling, and I estimated as many as 3000 Dunlin.  Near the Bonge Road access I saw two small dark brown backed shorebirds with short bills flying against the wind right at the surf line as I was heading north with the wind.  I could make out their partial neck/breast bands – definitely two Semipalmated Plovers.  I did a u-turn and raced back down the beach hoping they would land.  They did not and were soon out of sight down the beach.  I was satisfied with the identification and thus with the results of my visit to the beach – both targeted Plovers – Big Month species #207 and #208.

I scanned out to the open ocean hoping that maybe the winds would have blown in a Shearwater – no luck.  I visited the Westport Marina and jetty – hoping for – well whatever.  Nothing new.  It had already been a long day and I had another 2.5 hours to go to get home.  Time to call it quits.  The only thing that could have made it better would have been for the Steller’s Eider to have been in Washington.  It was ABA photo #635.  A week that included that photo and the photo of a White Wagtail was quite a week indeed.