Another early morning start and I was at Lake Murray in La Mesa.  This was purportedly a good spot for Scaly Breasted Munias, an introduced species from the Waxbill family that was formerly known as the Nutmeg Mannikin.  I had first seen this species in its natural habitat at the Mai Po Nature Preserve outside of Hong Kong on Christmas Day 1979.  I also saw them on the Cairns Esplanade in Australia in 2003, in South Delhi, India in 2011 and also  a half dozen in Hawaii in 2011 where they are non-native.  I had seen my only one in the ABA Area on my previous trip to the San Diego area in reeds across a channel ditch at Tecolote Park in February.  I wanted a better ABA look and a photo.

I found lots of birds at Lake Murray including a somewhat late Spotted Sandpiper and a gorgeous Nuttall’s Woodpecker (which I had also seen on that previous trip to Tecolote Park) but no Munias.

I was also on the lookout for Lawrence’s Goldfinches.  There were many candidates but despite my best efforts to turn them into something else, they were all Lesser Goldfinches.  I had counted on this spot for the Munia photo but there was a Plan B and I headed off to Santee Lakes – highly recommended by Melissa Hafting and a good spot per Ebird.  It was less than 8 miles away.  I was there just after 9:00 a.m. and as had been the case on some other occasions on this trip, I was surprised to find it as large as it was.  Where would those Munias be?  After driving and walking around for about 30 minutes and finding lots of ducks but no Munias, I called Melissa in Canada for more specific help.  “Try in the tall grass out near lakes 5 and 6.”  I had covered that area once but now went back in earnest.

For another 30 minutes – no Munias.  It wasn’t sufficiently special to be considered a consolation prize and I had not yet given up, but I got a great photo of the inaptly named Ring Necked Duck – a new species for the trip and plentiful here.  In addition to it being a close up in good light, what made this a memorable photo is that it actually shows the ring around the neck.  You can always see the ring around the bill, and it should be named “Ring Billed Duck” but the neck ring is usually not visible.

I made another loop around Lake 5 by car and was about to unhappily give up on my desired Munia photo.  There was one more stand of tall reeds to explore (again) and as I approached I could see some birds twittering about.  They were a half dozen Starlings – are you kidding!!??  But then the Starlings flew off and there was still movement and my sought after Scaly Breasted Munias came out into the open for some long awaited photos. Finally I could check it off of my ABA Missing Photos list. 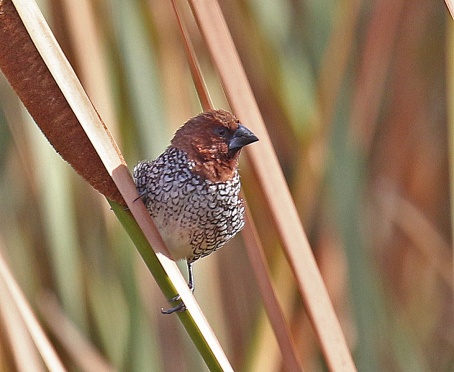 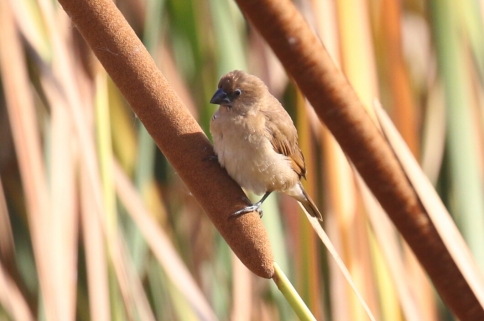 Time to move on.  I texted Mel about the success.  On the way out a flash of yellow flew in front of me and perched on a wire.  At first my brain said Tropical Kingbird but then I remembered where I was and Cassin’s Kingbirds are common here.  The light was great for a photo.

In addition to it being a good photo, I add this picture here as a means of bringing up some ornithological history.  The Cassin’s Kingbird gets it name from John Cassin a talented ornithologist and taxonomist from Philadelphia in the first half of the 19th Century.  Many of our birds are named after famous ornithologists, naturalists or illustrators such as John James Audubon (Audubon’s Oriole and Audubon’s Shearwater), John Graham Bell who accompanied Audubon (Bell’s Vireo and Bell’s Sparrow), William John Swainson – a British illustrator/lithographer (Swainson’s Hawk, Swainson’s Thrush and Swainson’s Warbler plus many others throughout the world) and John Kirk Townsend a naturalist/collector also in the first half of the 19th century (Townsend’s Warbler, Townsend’s Solitaire and possibly the Townsend’s Storm Petrel recently split from Leach’s Storm Petrel).  There are many others with a single ABA species bearing their name, but I believe John Cassin wins the eponymous bird lottery with 5 species:  Cassin’s Vireo, Cassin’s Sparrow, Cassin’s Finch and Cassin’s Auklet in addition to this Cassin’s Kingbird.  I have seen all of the Cassin species this year.  The Kingbird is certainly the most colorful.

Now back to birding…

Another species that was on my list from my earlier trip to San Diego this year was the Ridgway’s Rail.  I had heard one at the Tijuana Slough NWR but not seen or photographed it.  This rail used to con-specific with the Clapper Rail but was split off in 2014 thus giving me an additional ABA species as I had first observed these rails in California at the beginning of my birding life in the 1970’s and had first seen the “true” Clapper Rail in Maryland in 1975.  I did not have photos of any of these species or of the closely related King Rail – also seen in Maryland in 1975.  So with timing good for a high tide (the best time to see all rails) and the added bonus of some Nelson’s Sparrows being reported there, I headed back to the Tijuana Slough hoping for both.  I had photos of the Nelson’s Sparrow from Maine but it would be a new ABA bird for the year.

My first blog post about this trip which focused on the great people intersections I had told the story of how I met another birder at the Slough, Shirley Reynolds, and how she kindly retraced her steps and guided me to the spot where she had had the Nelson’s Sparrows and a Ridgway’s Rail and how we refound and got photos of both.  I later learned that Mel Senac (see my earlier Rufous Backed Robin story where I met Mel) had helped Shirley get on the Sparrows – so the chain of connection was even better.  It was not the greatest photo, but any photo of a rail is a victory as they are often stealthy and buried in the reeds.  It was an ABA Life Photo so I was very happy.

Since I was in the area I moved down to Dairy Mart Road where a Green Tailed Towhee had been reported – not needed for any of my “lists” it is just a cool bird and I remembered the location from a visit many years ago.  I did not find the Towhee but saw my only Common Gallinule for the trip.  After a quick lunch I headed to a Hooded Warbler Stakeout at Ruette le Parc in Del Mar about 30 miles away.  I also told this story in my first “People Post”.  No success in finding the Hooded Warbler which again would only have been a new bird for the year but a wonderful time visiting with Dave Trissel one of the fine people I met on the trip.

It was getting dark and I decided to call it a day.  I would be leaving the next day but could bird until around 2:00 p.m if I wished.  There really were no new targets but I wanted a better photo of a California Gnatcatcher.  Melissa had recommended the San Elijo Lagoon in Encinitas – seconded by Dave Trissel so I found a hotel nearby and called it a day – a very good day since I had finally gotten photos of the Scaly Breasted Munia and the Ridgway’s Rail.