In 2016 no Snowy Owls were reported on Ebird for Western Washington.  In 2015 there was a single report of two owls on Sandy Point in Whatcom County on December 1st.  There was no photo and I do not know if the record was accepted.  In 2014 a Snowy Owl was seen in Edmonds and was reported 19 times (including once by me).  2011 through 2013 were so-called irruptions year and Snowy Owls were seen in many locations in Western Washington but particularly at Damon Point in Ocean Shores where there were more than a dozen in 2011.  At that same time, there were 20 or more at Boundary Bay in British Columbia.   I saw Snowy Owls in both locations and those are among my favorite birding memories.

On November 1st, Philip Calise reported a Rock Sandpiper at Sandy Point in Whatcom County.  I had already seen a Rock Sandpiper this year on January 16 at Rosario Beach – the same incredible day when we had a Falcated Duck at Padilla Bay.  The former is more regularly found at the jetties on the Coast but is still uncommon and a good bird.  The Falcated Duck is a mega-rarity and was a life bird for most of us who saw it.  Oh yeah on November 1st,  Phil Calise also reported a Snowy Owl…

Frank Caruso, lured more by the Rock Sandpiper, joined me visiting Sandy Point on Friday November 3rd with my target being the Snowy Owl – which would be new for Washington and the ABA area for 2017.  The weather was MISERABLE!!  It had snowed the night before “up north” and while there was no snow on most of I-5 itself, as we neared Bellingham, there was a beautiful dusting on some fields and trees and some not so beautiful icy patches on the Freeway.  It was not beautiful at all as we exited and headed off on Slater Road with lots of ice.  Suddenly a car maybe 100 yards ahead of us did a very scary skid and slide – first to the left and then to the right and then back to the left before being stopped by one of those divider wires put there for just that purpose.  I was able to slow and keep control of our car without hitting the brakes – steering through the problem.  Adrenalin levels did rise.

Further along we saw a car completely turned over on the side of the road – an obvious turn turtle from earlier that morning.  We continued on – maybe just the right conditions of snow and ice for a Snowy Owl.  When we arrived at Sandy Point, there was snow and ice on the road and the parking area and the beach.  Worse though was the wind.  Probably the cause of the ice on the road earlier, here it was howling – gusting over 40 mph and a pretty constant 20 mph plus.  The ambient temperature was below 30 degrees – who knows what the wind chill was – but it was COLD!!  We put on every piece of clothing we had (and we had brought a lot expecting the cold) and went out exploring.

The wind made it difficult to bird, impossible to use a scope and definitely suppressed the birds.  We found some Black Turnstones and not much else.  Another birder was there – he had seen the Snowy Owl the day before and had already been there for 30 minutes plus without a hint.  We braved the conditions for an hour and seeing no let-up and no Snowy Owl, we gave up and headed home.  There were lots of nooks and crannies among the rocks, logs, docks and homes.  The Owl was probably hunkered down out of sight.  Rats!! If the owl was relocated, maybe we would come back and try again.  On the way out, we saw an even worse scene of a car off the road completely on its top.

As it turns out the Snowy Owl was relocated at Sandy Point the next day, but per my preceding blog post: A Bazillion to One!!   (https://wordpress.com/post/blairbirding. wordpress.com/19347), events at Neah Bay took priority and thoughts of Snowy Owls were placed in the “Future File”.  Today the Future arrived.  The Snowy was reported again yesterday (Wednesday) and there was also a report of two Snow Buntings at Sandy Point.  The weather was good and projected to get worse later in the week.  There was no snow, no ice and light wind.  The temperature was projected to be around 40.  I would give it a try.

As I have often written, when chasing a rarity, it is often best to first look for the birders before the bird.  Often someone else is already there and already on the bird.  Such was the case today.  As I arrived at the tip of Sandy Point I could see two birders off in the distance looking at the spot where I expected the Owl to be.  Two more birders were returning to the parking area.  They confirmed that the Snowy Owl was there, hunkered down in the logs just across the narrow entrance to the Bay.

I went to the point – got a quick view and then worked to get a photo.  The Snowy was indeed hunkered down – partially hidden from our angle and with its back towards us.  I got a few “record” photos and was very glad that conditions had changed.  I asked the other birders if they had seen any Snow Buntings.  Two had been seen on the grass above the beach and along the path maybe 45 minutes earlier.  I turned my attention elsewhere hoping the Owl would move to a more photogenic position.

The area was quite birdy – with birds on the grass, on the rocks and in the Bay.  First noted were two pairs of Black Scoters – uncommon but not rare.  Keeping the “Black is Beautiful Theme”, a small flock of Black Turnstones also flew in.  A search for an accompanying Rock Sandpiper yielded only a Dunlin. 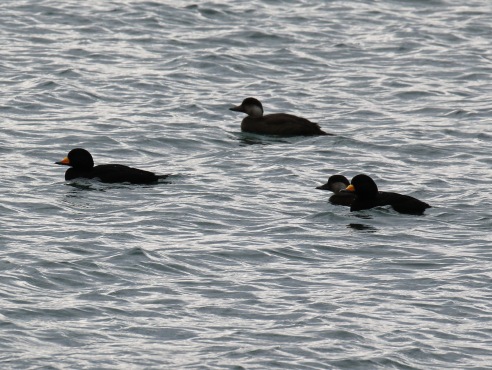 Suddenly another flock appeared – but not shorebirds – 30+ by estimation – what were they?  They teased us with flyovers and near landings but our only views were from below – a wonderful group of Snow Buntings – their striking black and white wing patterns clearly evident.  Not the hoped for close-up photo but a real treat and new State and ABA birds for 2017. 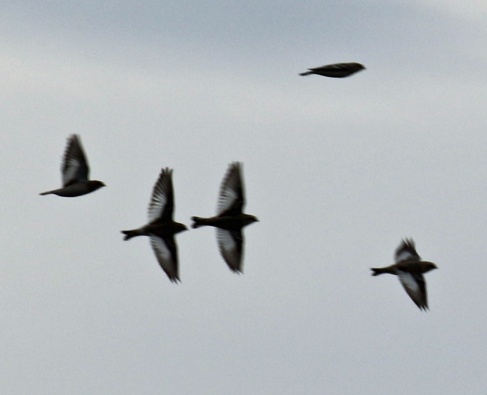 So both of the “Snow Bird” targets had been found – not great photos – but great birds and Snow Birds without the snow and ice and wind made for a wonderful morning.  Maybe the Owl would change position and provide a photo op.  But first another bird appeared – another flyover and one of the other birders called out that it was a Lapland Longspur.  This was a good spot to find one and it would have been another new year bird.  My interest turned to it and away from the Snowy Owl.  I was the only one to follow the bird as it finally landed and I was able to get on it and get a photo – confirming that it was – only an American Pipit.  Another nice but far more common bird – and also very habitat appropriate here.  Too bad it did not have a red throat.

My attention returned to the Snowy.  Four Western Meadowlarks flew onto logs just across from the Owl – a nice photo.  Some other birders had a arrived.  I showed one the Snowy through my scope – a life bird for her.  It was still mostly hidden though – an occasional head swivel at least showing the bright yellow eyes.

I decided to give it another 15 minutes hoping for a better photo.  Other birds seen included some Common Goldeneyes, Surf Scoters, Red Breasted Mergansers, Buffleheads, Common Loons, Double Crested Cormorants, Glaucous, Mew and Ring Billed Gulls and Horned Grebes.  The Snow Buntings did not return.

Finally the Snowy Owl moved a bit but while more in the open, still not a full on facial shot.  I grabbed a last photo as it fluffed out its feathers – showing the insulation that keeps it alive in its normal harsh arctic environment. 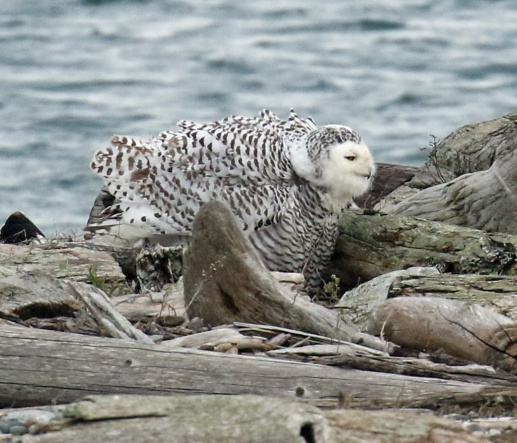 Now it was time to head home.  It had been another great day birding – so much better than the earlier visit.  I will take Snow Birds over snow itself any day!!