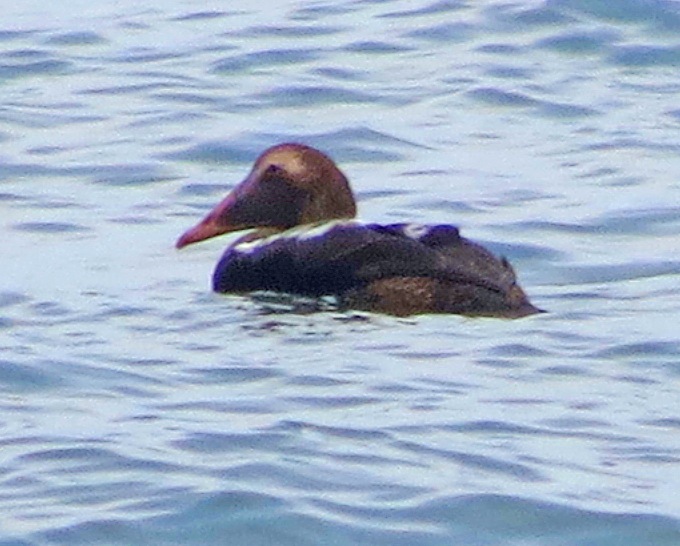 On Tuesday this week (October 25th), Ann Marie Wood, Jon Houghton and I planned an early morning trip to Ridgefield Refuge to look for a Red Shouldered Hawk (new in Washington for the year for all of us) plus some other new birds for Jon and Ann Marie.  Plans changed when a Common Eider was reported on Ebird – and pretty close – in the canal at Hayton Reserve on Fir Island.  So we headed north instead of south.  This was a rare bird worth chasing.

When I shared the story of our chase with a friend unfamiliar with birding, she astutely wondered how a bird called a “Common” Eider could be rare and queried whether it had to do with geography.  And so it does.  Common Eiders are anything but common in Washington.  They belong in the North Atlantic, where  they are very common indeed or in Alaska, where they are less so.  In fact since 1990, Ebird shows only three Common Eiders have visited our state.  There was a single observation near Tatoosh Island off Cape Flattery on April 26, 2005, another at Ediz Hook in Port Angeles on August 8, 2008 and then the very cooperative Common Eider female that was observed and photographed by many at Westport between October 19 and October 31 in 2012.  That was my first Common Eider observation in Washington – or anywhere else for that matter. 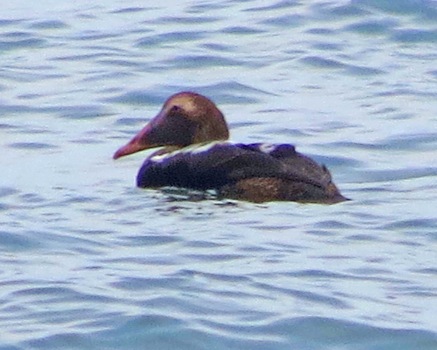 Astute readers will note that all of the previous sightings were in saltwater and were coastal.  What was this Common Eider doing in a canal on Fir Island?  The Ebird report had great photos of a close in female Common Eider.  There was no mistaking the identification, so our only concern as we departed was whether it would still be there when we arrived.

As I have written before, one rule when chasing birds is to “Look first for the birders”.  As we approached Hayton Reserve, even though it was pretty early, we wondered how many birders would be there already – hopefully with cameras, binoculars or scopes trained on the rare duck.  Driving in towards the parking area, we saw only one other person, but his scope was pointed out towards the canal so we were hopeful.  It turned out that it was our friend, Jordan Gunn, who had been in the Seattle Audubon Master Birder’s Class with Jon and me in 2013.  (Ann Marie was a graduate of an earlier Master Birder’s Class.)  He gave the thumbs up so we figured we would “get our bird”.  But Jordan added that the bird had been much closer ten minutes earlier and when a Bald Eagle flew over, all the waterfowl had scattered and it was now at the far end of the canal – almost a half mile away.  My hoped for excellent photos were now unlikely.

Thanks to Jordan, with scopes, we were able to get a poor view of the Common Eider hiding behind some reeds.  Thankfully a Common Eider has a very distinctive head shape with a very long sloping bill, so even though the light was terrible and the wind was blowing hard and it was a drab female and it was so distant, we were satisfied that we had indeed seen this very rare bird.  A good chase.  We decided to head off to Wylie Slough to bird for an hour or so and then to return hoping the Eider would return to its earlier location close to the road.

There was far less wind at Wylie Slough and not very many birds.  A pair of Downy Woodpeckers posed nicely as did a Spotted Towhee.  There were some Black Capped Chickadees, lots of Robins, a Brown Creeper, some Kinglets and not much else.  Time to go back to Hayton Reserve.  Then some bad news.  Jon got a call from Jordan who had word from Ryan Merrill that our treasured rare Common Eider was an escapee from a local collection.  This explained its unlikely location but no longer a wild bird, it was now not recordable either.  There went a Washington year bird for all of us.  Rats (I think I may have used a different word…) 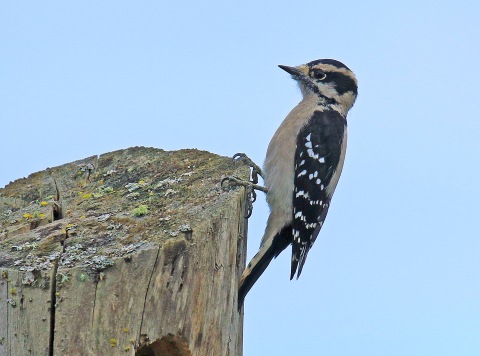 It was now 10:30 a.m.  Was there still time to return to Plan A and go to Ridgefield?  We were an hour further away and it was 4 hours later than our previously planned hour of departure.  Despite our disappointment “losing” our record, we just could not justify a trip to Ridgefield.  Now what?  We decided to check out various areas in the Skagit and Samish Flats and just enjoy the local birding as we knew that swans and geese were returning as were Rough Legged Hawks and Short Eared Owls and maybe there would be a surprise. 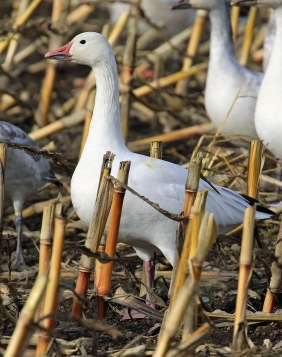 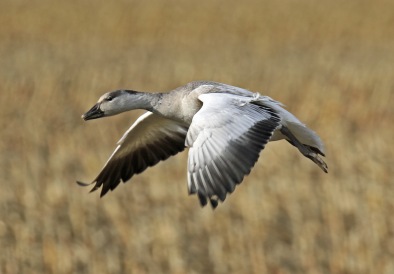 We did not see many swans but small groups of both Tundra and Trumpeter Swans flew overhead.  We completely struck out at Jon’s “Sparrow Spot” and then continued to look for owls at the East and West 90’s.  No owls but we had a spectacular view of a Rough Legged Hawk.  We also saw Red Tailed Hawks, Northern Harriers, Bald Eagles, an American Kestrel and earlier had a Sharp Shinned Hawk.  Photos of the Snow Geese and the Rough Legged Hawk made the trip worthwhile.

Worthwhile but it sure would have been nice to have been able to keep that Common Eider record.  I had seen Eiders in their beautiful breeding plumage in Nome earlier this year and had great looks on my Maine trip last year.  I include those photos here because they are quite striking birds and also I guess to feel better about the lost record yesterday.

And now for the rest of the story…

Sorry I just can’t resist this one.  When the aforementioned Common Eider was at Westport in late October 2012, it was not the only rare bird in Westport.  Not more than a few hundred yards from the Eider there was another rarity from the north or maybe the northwest.  The other visitor was a Northern Wheatear.  Even rarer than the Common Eider, this visitor from Asia, was the only Ebird record for Washington at least from 1980.  Another was seen at Discovery Park on October 20, 2014.

I did not see the Wheatear in 2014 but I saw a pair on my Nome trip earlier this year.

Seeing both a Common Eider and a Northern Wheatear on the same day in Alaska would be very nice.  Seeing them on the same day in Washington – wow – an incredible day indeed. But I had a sighting in Westport that day that was almost as good and confirms just how special seeing those birds there was.  As mentioned above, I was a member of Dennis Paulson’s Master Birder Class of 2012-2013.  There may be nobody in Washington that knows as much as Dennis about birds and while he has certainly seen his share in Washington, in the U.S. and throughout the world, Dennis cannot be considered a lister.  He is a teacher, a student, an expert, a true ornithologist.  During our class, always in good humor, Dennis would chide those of us who chased birds for our “lists”.  The expertise he gave us helped in that effort but somehow our focus on “ticking” birds on our lists seemed a “lesser” pursuit.

The Westport birds attracted many listers/birders from all over the state and there was a virtual parade of birders – moving either from the Wheatear to the Eider or the Eider to the Wheatear.  I had chosen to look for the Wheatear first and was very happy to find it readily.  I then headed towards the water just off the jetty where the Common Eider was being seen.  As I reached the half way point, I saw a familiar face coming towards me.  It was Dennis Paulson.  Even he could not resist the draw of adding these two rarities to his Washington List.  Caught in the act, Dennis just shrugged his shoulders and gave a knowing smile.  So when I saw the Common Eider in a few moments, it was my third special sighting of the day.

2 thoughts on “The Disappearing Common Eider – or at Least the Observation Thereof (And be sure to read the closing story, too)”