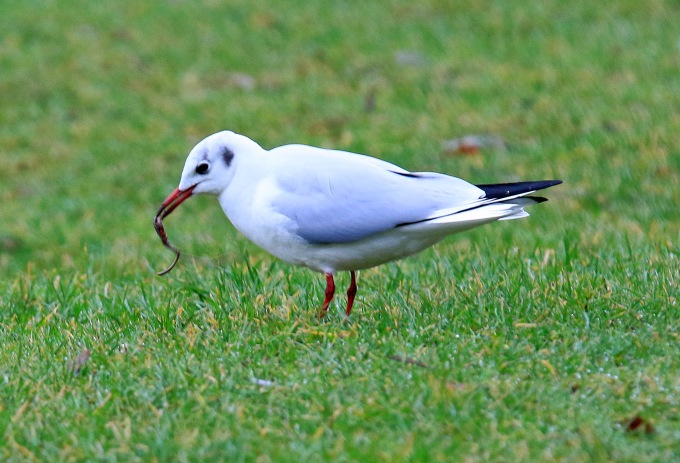 This is getting to be old hat:  get up early, meet friend(s), cross border into Canada, find exciting rare bird, meet new birders, see old friends.  Get photo. Come home.

Well not quite that easy – but today almost.  Ann Marie Wood, Steve Pink and I left Edmonds at 6:00 a.m. and headed North in search of a Black Headed Gull that was first seen two days ago at Trout Lake in Vancouver, B.C.  The Black Headed Gull  (Chroicocephalus ridibundus) is a small gull that breeds in much of Europe and Asia.  I saw my first one at the Mai Po Nature Reserve outside of Hong Kong on Christmas Day 1979.  I was in the company of James, an ex-pat Brit – how appropriate as now just over 36 years later here I was with Steve Pink – another super ex-pat Brit birder.

Black Headed Gulls have been seen both in Washington State and in B.C. before but they are quite rare in both places – a great attraction for birders.  I had chased one in South Bend, Washington in 2014 and after waiting more than an hour had a very quick and unsatisfying view before it flew off.  When we crossed the Border at Blaine, our border guard was the same personable (I know that is rare in this job category) young woman that greeted us on our quest earlier this month for the even rarer Siberian Accentor in Surrey.  I remembered her; she remembered me and once again she smiled when we told her we were after another bird.  And just as before, “No we were not bringing in any seed/feed or firearms!!”  Maybe this greeting was a good omen.

We found our way to Trout Lake (Jack Hendry Park) without trouble and were optimistic as the lake just before us as we parked was full of gulls and a birder was checking them out with his scope.  Rule 1 when chasing a bird somewhere (pretty sure I have said this earlier in this blog) is to look first for the birders hoping they have already found the target.  No such luck this time.  He had been at the Park for just under an hour and no luck so far.  Our optimism sank a bit.  Then another birder arrived, Sebastian Pardo.  He lived nearby, was extremely knowledgeable about this bird and birds in general and he said not to worry.  “It usually shows up around 10 when most of the off leash dogs (allowed) are gone”.

Some more Canadian birders arrived and the additional eyes were valuable and indeed proved so fairly quickly as the Black Headed Gull arrived out of nowhere at about 9:10 a.m. and landed with the 100 plus other gulls on the Lake.  In the same cooperative spirit it would show throughout the remainder of our stay, it conveniently landed at the extreme left end of the raft – all alone and clearly identifiable by its size, red feet and red bill with a dark tip.  YAY!! we had found our bird. I got a quick photo but not a very good one as the light and distance were not terrific.  Sebastian was off by 50 minutes – we all approved.

Very shortly thereafter Tina Klein and Nathaniel Peters showed up.  They had been at the Accentor sighting earlier (as had Ann Marie but not Steve) – well representing the Washington State birding community.  Nathaniel got an immediate look – ABA bird 668 for him.  Tina was a little late getting on it as it was now buried in the flock.  Then CHAOS!!  Every gull took off from the lake – an eagle was overhead and gulls are eagle food.  Where was it?  Where did it go?  Nathaniel had the answer – right over there on the grass – in the open with only one other bird with it.  We raced for better looks and photos.

As I said this was a most cooperative bird as it remained in the open in the grass and pictures were easy.  A favorite for the day was one of the Gull eating a worm which I saw it pull from the grass – a taste that Robins and gulls, at least Black Headed ones apparently share. 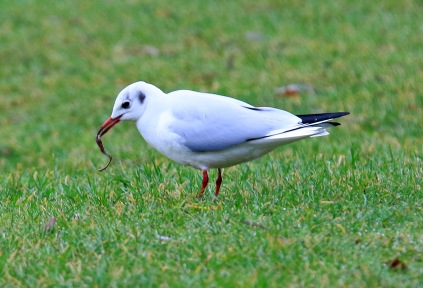 Some of its cousins joined it on the grass but with its smaller size and red bill and feet, our friend was easy to find.  Then  CHAOS again – not an eagle just a very energetic young boy running at and scattering the gulls.  As they flew off and landed and he repeated his charge we screamed at him to stop which he fortunately did.  Still cooperating our Black Headed Gull now landed on the even closer gravel playfield.  More birders and photographers arrived and the Gull continued to accommodate us all.  I caught a photo that I guess is what happens when you eat worms (and whatever else gulls eat) – the stream of white coming out of the gull’s bottom as clear and well timed as I have ever photographed.  Please do not take the photo as an editorial comment.

We had been at the lake maybe 30 minutes before the gull arrived.  We enjoyed perhaps 20 minutes watching it and it was now not even 10:00 a.m.  What next?  We considered a trip to Iona Island in search of the Tufted Duck that has been there for a while but instead, driven by the County Birding Madness that consumes both Steve and Ann Marie, we decided to head south to Whatcom County to try to find Mountain Bluebirds that had been reported there this week.  I had seen one at Semiahmoo in Whatcom County last year, but it would be a new county bird for each of them.  I was game – sure let’s go – but first a stop at Semiahmoo – which I always enjoy.

Semiahmoo Spit is immediately across from Canada and is usually a great place for waterfowl and shorebirds.  It delivered again although there were not as many birds as often can be seen there.  Just before getting to Semiahmoo as we drove by Drayton Harbor we spied a Northern Shrike, always a good bird.

As we drove onto the Spit, we were greeted first by a young coyote sauntering across the road without a care. 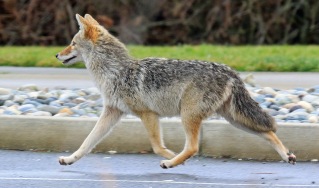 In Canada we had seen many Bald Eagles – and we would see many more later this day.  This included several on the Spit – a common find there.

Ann Marie was particularly interested in seeing some White Winged Scoters.  We found a small group in the bay but from the back seat she was not able to get a good view.  I told her not to worry as I was sure there would be more – and in a few minutes we had 150 plus on the Drayton Harbor side – joined by Surf Scoters as well.  She was also interested in a Long Tailed Duck – another bird often found here. Just as Steve commented that they are more often found out at the end of the spit, one flew right by us – the only one we saw that day. 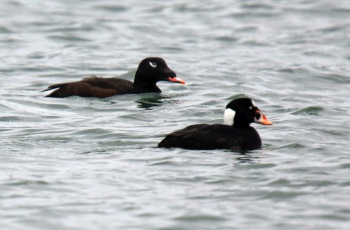 Other treats from the Spit were Harlequin Ducks, Common and Red Throated Loons, Horned Grebes and 4 species of shorebird – Dunlin, Black Turnstones, Sanderlings and a pair of Black Oystercatchers.

Now it was off to the spot where the Mountain Bluebirds had been reported by Eric Ellingson.  I keyed the address into the Garmin GPS and followed directions only to arrive at a single house with a brown fence in a large open area.  Within 1 minute (ok 10 seconds) of arriving we saw a blue bird on the fence.  It was indeed our target.  Shortly thereafter a second duller version joined it.  The former a male, the latter the female.  Sometimes it really is easy. 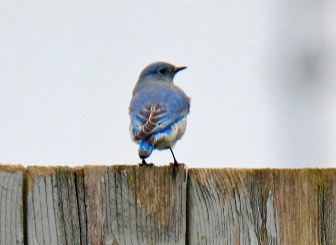 We headed home with a detour through the Samish flats area but by the time we arrived so too had the rain and a lot of wind.  So we cut it short and headed home – very happy for the day.

With today’s Black Headed Gull added to the earlier Redwing and Siberian Accentor, Canada has been VERY good to me this year.