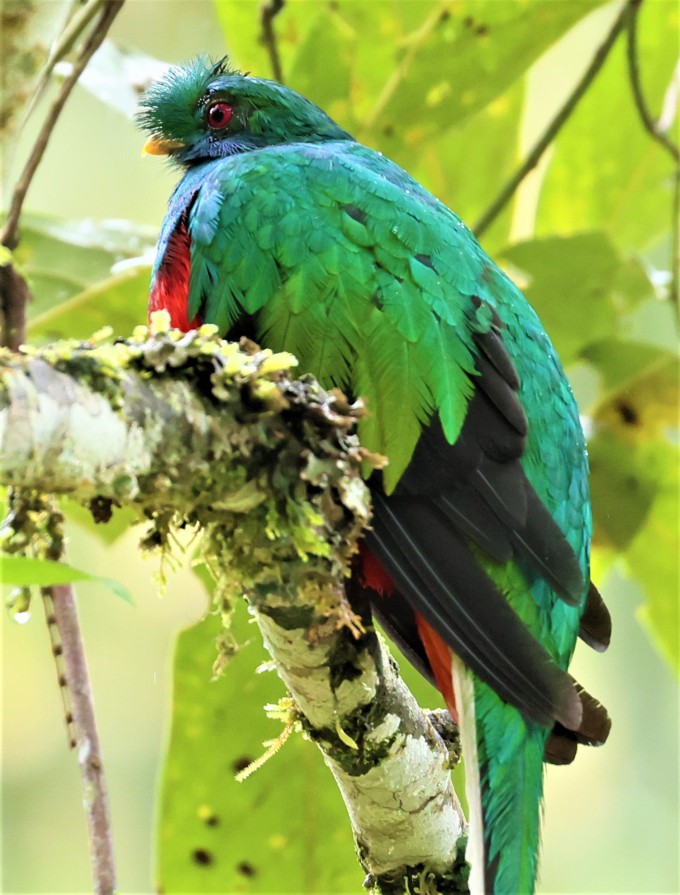 On the morning of June 24th our trip departing Sacha Lodge reversed our arrival trip so it was canoe, hike, motorized canoe and then to the airport. As written earlier, instead of meeting our guide and driver at Coca, we would instead be flying back to Quito where we would meet them and continue the tour hitting the Eastern Andes. The change in plans meant we would be going to some different places but our next two nights would be spent at Rio Quijos as originally planned. The difference, however, was that under the original plan, we would have birded our way to Rio Quijos from Coca. Instead we would head to Rio Quijos from the Quito Airport and we did not begin our birding until 2:00 p.m. with a couple of stops on the way to Rio Quijos and then some at the Lodge itself. So essentially we lost most of the day of birding. I just wish conditions had allowed us to keep to the original plan. Every detail of changing the program was handled flawlessly by our tour company and by Sacha Lodge. We were very appreciative as it could have been worse.

Worse would have meant ending the trip and trying to fly home. Since the end result was that we were able to continue on schedule and fly home as planned although with a bump, we were glad we stayed and did not bail out. That said this was by far our least productive day of birding and we had a total of only 19 species for the day with only 5 new for the trip and of those only one, a Red Breasted Meadowlark, would not be seen the next day at the Lodge. Looking at trip reports from others, I believe we would or could have had at least another 30 to 50 species if we had been able to travel from Coca as planned. Given the limited birding this day, this post will cover days 10 and 11. That said there was one special bird on day 10.

Mountain ranges are often barriers to movement that over time – lots of time – end up creating either new subspecies, new species or very distinctive variants. This is the case in the U.S. with the Rocky Mountains often being a dividing line between Eastern and Western species and in my home state of Washington there is significant difference in species seen on the Eastern and Western slopes of the Cascade Mountains. This is definitely the case in Ecuador as many species found in the Eastern Andes are not found in the Western Andes and vice versa. In the next days we would see new species in the East that would not be found in the West. But there were also very interesting variant differences for two species that are seen in both areas but with distinctive color differences.

Not a great photo and the bird was either not in the best plumage or was let’s just say “messy” but it was the only Red Breasted Meadowlark seen on the trip.

Since we would start the morning birding at Rio Quijos, it was a later than usual start on the morning of June 25th – Day 11 in Ecuador. It was great to be back in “feederland” especially for hummingbirds which would be plentiful this day. Once again we did not keep accurate records for each stop of the day. The feeders at Rio Quijos were active for both hummers and tanagers but we did visit other spots as well so apologies if the photos are not site specific as I have reported them all on Ebird as Rio Quijos and vicinity.

I have already mentioned the Eastern/Peruvian form of the Booted Racket Tails – just amazing little gems. I probably took a hundred photos of just this species and it has been hard to leave some out, but these are very representative. I experimented with camera settings to try to stop the hummers in flight – fastest shutter speed was 1/2000 second – pleased but probably could have gone even faster.

A very close second to the Booted Racket Tail was definitely the Long Tailed Sylph another hummer that was frankly hard to believe. Again many many photos to choose from and hopefully these do this spectacular species justice.

The Long Tailed Sylph was one of 12 hummingbird species seen that day, 7 of which including the Sylph were new for Ecuador, of which 4 were new for my world list as well. All were quite spectacular if not quite in the league of the Racket Tail and Sylph unless…the really tiny Gorgeted Woodstars buzzing around more like insects than birds might be considered as such.

There is no question that hummingbirds are some of the stars in the world of Ecuadorean avifauna, but Ecuador has an incredible diversity of birds and a diversity of charismatic or showy birds. We had some beautiful additions to our list including Andean Motmots and Crested Quetzal and also two woodpecker species – Smoky Brown Woodpecker and Golden Olive Woodpecker.

As the name suggests there is a river than runs near the Lodge – the Quijos River. Especially with recent heavy rains there were many waterfalls in the area and the river was running fast and furious. I hiked down to the river with Jorge Luna hoping to find a Torrent Duck. No ducks but we did find several flycatchers along the way including Golden Faced and Torrent Tyrannulets, Black Phoebe, Lemon Browed, Rufous Breasted and Olive Chested Flycatchers, Barred and White Winged Becards and favorite at least photo-wise – a Common Tody Flycatcher.

As had been the case at other lodges where we had hummingbirds coming to feeders, there were also tanagers – in this case 7 species. Only the Golden Eared Tanager was new for the trip but I was pleased to also get photos of Blue Necked, White Shouldered and Magpie Tanagers.

Additional new photos included House Wren, Yellow Browed Sparrow, Southern Lapwing (in a field near the lodge), Scarlet Rumped Cacique, first seen in Costa Rica 25 years ago but no photo showing the scarlet rump, and of a Blue and White Swallow – finally remembering to get a picture when a small group perched. Species I did not have good luck with as far as photos were the spinetails and woodcreepers. An Ash Browed Spinetail was a life bird and the Montane Foliage Gleaner, Olive Woodcreeper and Azara’s Spinetail were new for Ecuador.

Before ending the blog with a return to the hummingbird feeders and a summary, I want to include photos of a Smooth Billed Ani, a species I still hope to photograph in the U.S., a Chestnut Collared Swift and a Bananaquit. The Chestnut Collared Swift was the 4th swift species seen in Ecuador but the only one I photographed as the others were either too distant, too “swift” or both. There must have been at least a half dozen Bananaquits at the hummingbird feeders and it was surprising to see how they shared the feeders seemingly without any concern about each other.

I wish the following photo was mine – it is the species of which I did not get a photo that I really wanted – Golden Collared Honeycreeper – photo by Andres Vazquez Noboa in Ecuador 12 years ago.

For the two days we had 69 species. Twenty six were new for Ecuador bringing our total to 390, and 11 were new for my world list which then stood at 2918 species.

There were some really great birds and the hummingbird action was very fun with often many species together – so that will be the last photo for the day.