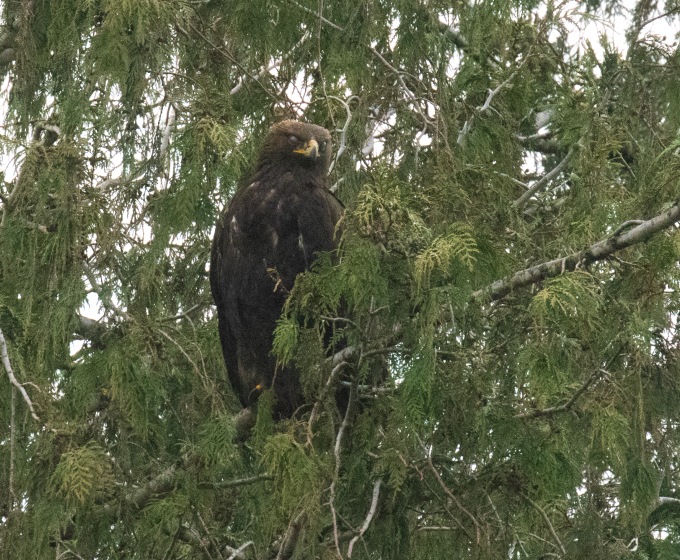 The cold and accompanying cough and congestion had been with me for 32 days.  Maybe it was a second one as I thought I was over the one acquired on the San Francisco trip as I left for Boston two weeks ago.  Grandson Griffin had a cold and he is a sharing kind of guy.  And I am sure birding in the New England cold with temps in the 20’s and single digits with wind chill did not help.   In any even I had been almost entirely indoors for a week and needed to get out.  I had hoped for company but did not want to share germs so I headed off alone on Tuesday, January 28th to look for birds on familiar turf in Snohomish and Skagit counties.  Not going to be doing a big Washington list this year, but there will still be a list to keep.

My first stop was at Tulalip Bay to see if Maxine Reid’s pet Ruddy Turnstone was still around.  Not really her pet of course, but she discovered it a year or two ago and reports it frequently – sharing with us all.  It was not at my first stop – the spit, but I found it with Dunlin and Black Turnstones on the logs at the marina – another of its hangouts.  Seeing one in Washington always reminds me of how birding is so different on the two coasts.  Ruddies are abundant in the East and regular but uncommon here where Black Turnstones are abundant.  If a Black Turnstone ever showed up on the East Coast it would be a mega event.

Ruddy Turnstone (from the spit – too distant for photos this day)

Next was a visit to Stanwood.  Yellow Headed Blackbirds had been seen near the same area on 98th Avenue where the Vermilion Flycatcher had been seen in 2018.  The area had tons of casual water in the fields and there were many ducks including my FOY Eurasian Wigeon.  There were also many blackbirds and Starlings.  As is soften the case, the flocks would form, fly off and reform within minutes.  I was able to see a single male Yellow Headed Blackbird on the ground in shallow water on a flagged off area for a second before a tractor came by and sent them all off to the trees.  I settled for that brief glance.

Target number 3 was a Wild Turkey on Hanstad Road on Camano Island.  There is a small flock that is regular there but I have missed them as often as I have seen them.  This was another miss.  I had not been to Eide Road since its major “remodel”, so I stopped on my way back.  Complete redo and not very birder friendly.  LOTS of water and very few birds.  Since it was raining I did not walk out along the dike, but was mostly sad to not find the old familiar place that I loved.  So much for Snohomish County.  I continued north.

No matter what else is going on, at this time of year on the Skagit and Samish flats, it is always fun to look for the big flocks of Swans and Snow Geese in addition to other waterfowl and raptors.  I decided not to make the usual stop at Wylie Slough and went straight to Hayton Preserve on Fir Island.  The main hope was for a Northern Shrike but there were other possibilities and one never knows what might be there.  No Shrike, buts lots of ducks and shorebirds.  Many hundred Mallards and American Wigeon, thousands of Dunlin and a dozen plus Black Bellied Plovers and Killdeer.  The shorebirds and many of the ducks took flight suddenly and I watched for a falcon, expecting Peregrine but hoping for a Gyrfalcon.  It was the former and I saw it grab a shorebird – probably a Dunlin.  Just before that I was able to get a distant photo (from the car as it was raining) of another Eurasian Wigeon – one of at least two or three that I saw in the mixed foraging flock.  There had also been small flocks of both Canada and Cackling Geese. 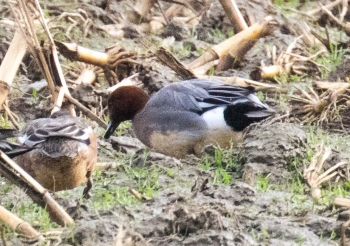 I continued my visit driving around familiar areas on Maupin, Rawlins, Moore and Fir Island roads.  Swans were everywhere in numbers and I stopped at one small group that I had heard whistling instead of trumpeting and the yellow at the base of the bill confirmed that they were Tundra Swans.  If I had to guess I would estimate that I saw at least 1500 swans for the day with the very large majority being Trumpeter Swans.  When I first started birding in Washington in the mid 1970’s, swans were rare indeed in Western Washington and seeing a Trumpeter was a treasured moment.  Good riddance to lead shot!! 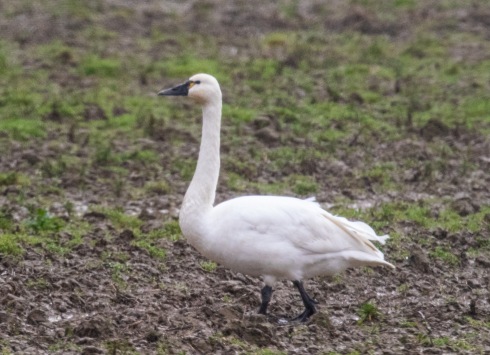 Also seen in big numbers were Bald Eagles.  There seemed to be an even split between juveniles and adults.  I stopped counting at 175 for the day – with 10 at a time being the biggest concentration.  Far less common than I think is more often the case were Red Tailed Hawks.  I did not keep a running count but do not believe I saw more than 8.  There were a half dozen or so Northern Harriers and only a single Rough Legged Hawk.  But there were other raptors and these proved to be the highlights of the trip.

In the past few days, there had been reports of a Prairie Falcon, a Golden Eagle and a Gyrfalcon.   They would all be first of year birds for me.  The Golden Eagle favored a particular group of trees at the intersection of Josh Wilson and Avon Allen Roads, a bit further north.   I did not have specific info for either of the others.  Still on Maupin Road I saw a smallish raptor on a distant tree.  It was an accipiter.  My first guess was a Cooper’s Hawk as it seemed too big for a Sharp Shinned Hawk especially at that distance.  This is where photography really helps.  It was a distant photo from the car – again in the rain, but the small head seen in the picture was proof positive that I was wrong and it was a Sharp Shinned Hawk.

A short while later in the same general area I saw another raptor perched alone in a distant tree.  This one seemed much larger but determining size at distance is tricky.  Again the camera saved the day.  My first thought had again been a Cooper’s Hawk female, much larger than the male.  But something was not right.  The photo proved it to be the Gyrfalcon seen in the area earlier in the week.  In the poor light through the rain, I thought it was too brown for that ID, but lots of input from others and photo comparisons on the internet support the conclusion.  A very nice new bird for the year!

Jon Houghton, who I ran into later in the day, had shown me a favorite brushy area just off of Moore and Best Roads that was good for sparrows and we had birded there with mixed results in the past.  I saw some movement in the brush and was able to call in a Lincoln’s Sparrow.  Being protective of my camera, I had left it in the car to avoid getting wet.  But I love the subtlety of this sparrow so I retrieved it and returned to the spot.  It had moved deeper into the woods and would not make another appearance.  I thought I might come back later in the day if I retraced steps.  It was my first one of the year.  I am including an older photo wishing that I had a new one.  The pose in the briers is exactly the same as this day.

It had already been a great day despite no Northern Shrike as the Turnstone, Eurasian Wigeon, Yellow Headed Blackbird, Cackling Goose, Sharp Shinned Hawk, Gyrfalcon and Lincoln’s Sparrow were all new for the year.  Time to look for the Golden Eagle.  The small grove of evergreens at the Southeast corner of Josh Wilson and Avon Allen Roads was impossible to miss.  So, too, was the eagle perched atop one of the conifers.  It was also impossible for it to be a Golden Eagle as it had a fully white head and tail.  An adult Bald Eagle.  But wait, there was a second eagle in an adjoining tree visible from my parking spot on Josh Wilson Road.  No golden nape and too large a head and beak.  This was an immature Bald Eagle.  Maybe the Golden Eagle was off hunting and would return.  When I walked around to Avon Allen Road, I saw a third eagle, somewhat buried in the branches.  This was the Golden Eagle indeed.  Even in the dim gray light, the smaller beak and flatter head and a golden cast to the head and nape were readily seen.  Juvenile Bald Eagles without white heads and tails are often misidentified as Golden Eagles and on the Samish and Skagit flats, Goldens are very unlikely.  Nobody knows why this one is here or why it returns consistently to this perch, but we are all glad it does.

I still wanted to find a Northern Shrike and figured the East and West 90’s on the Samish Flats would be as good a spot as any and there was always the chance of finding Short Eared Owls.  The latter put on a good show at the East 90’s with at least three there.  Two were interacting and I do not know if it was a breeding display, hunting competition or what.  My photos just show two owls in flight.  There was a third Short Eared Owl there as well and it landed on the ground not too far away giving me a chance for a decent photo.  And then another as it flew away. 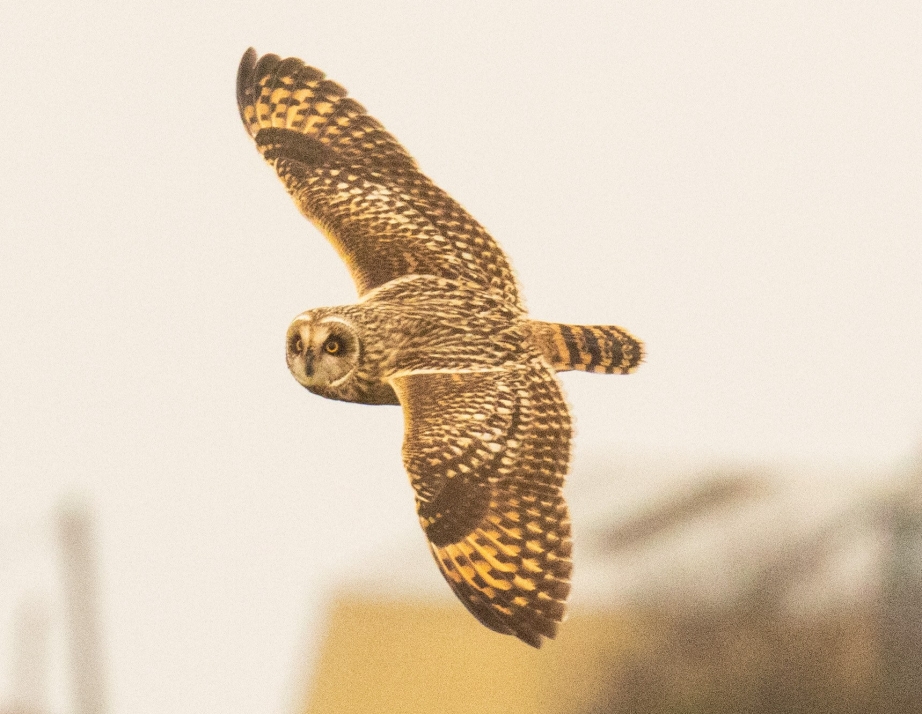 A smaller bird landed on a wire and at first I thought it was my Shrike.  Nope – an American Kestrel – often seen here. 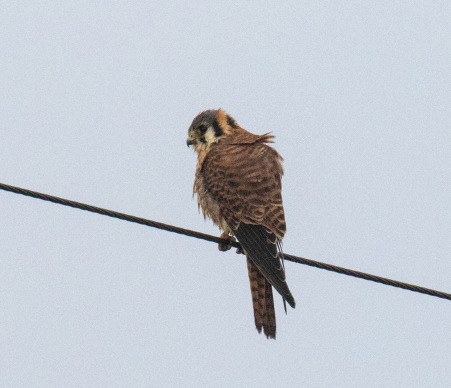 It was then on to the West 90’s where I ran into Jon Houghton and Bev Bowe who were scouting for the field trip Jon would be leading the following day.  They had seen a Northern Shrike at the dike on Fir Island.  I had forgotten to look there and thought I might return.  We watched a single Short Eared Owl and over 30 Western Meadowlarks, the most I had ever seen there.  They took off and I hiked out into the fields hoping for more Owl shots.  Nothing close, but as I returned to the parking area, a Northern Shrike perched briefly.  It was the 9th FOY for the trip.

Time to go.  I was still coughing a bit and congested, but how much better to be out birding doing that than staying home.  I am closing with two Snow Geese photos as they are quite the show in the area.  One a close up and one a distant shot of thousands of them off Fir Island.  Wish I had seen the Prairie Falcon but no complaints…