This will not be real long, but having finished the blog posts for the states recently visited in the Midwest, I wanted to do a quick overview summary.  For starters maybe they should be “Prairie States” as opposed to the Midwest.  I hope nobody is offended with either choice.  In order visited the states are Minnesota, North Dakota, South Dakota, Iowa and Nebraska.  All at least had prairies but especially since I was only in the eastern parts of the Dakotas and Nebraska, I hardly had a taste of real prairie country.  I do hope to get back to do it right. 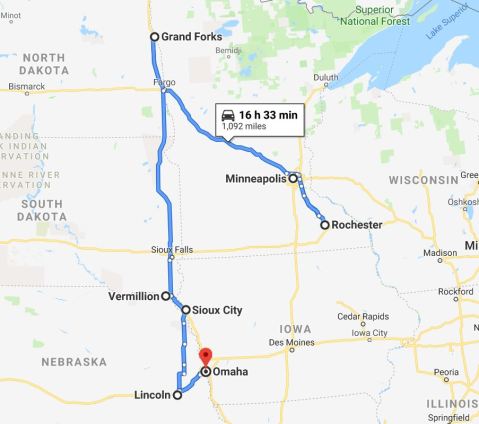 These were states 43 through 47 in my 50 State journey/saga/adventure where I have endeavored to see 50 species on single days in each of our 50 states.  So far so good, as I saw that threshold number in each of these states as I have in each of the preceding 42.   I traveled more than 1500 miles by car during the 10 days.

The remaining 3 states are Kansas, Oklahoma and Arkansas.  If the bird gods cooperate, they will be added to the list later this year and the in the field part of the 50/50/50 Adventure will be completed.  Ahead will hopefully be a book sharing stories, experiences and insights gained along the way.  Also ahead will be some presentations to birding groups with at least a few invitations already in hand.  The purpose of all of this will be to inspire others to create and pursue their own adventures and to have their passions take them to special places with special people.

Along the way I have birded with individuals and groups in each of the states visited both on the actual “project days” and in days preceding or following.  Being with members of the local birding communities in each state has been an important part of this endeavor and has given me the greatest return on the time that I have invested.  I have not kept track of the exact number but know it has been more than 400 people.

The state with the most birds on a single day is Maryland – well over 100 – but since it is an exception to my normal rules, the records are fuzzy and inexact as it predates my Ebird records by almost 40 years.  The reason for this exception is that it was an extraordinary day of birding with the legendary Chandler Robbins, a co-author of my (and maybe your) first birding guide, Birds of North America.  I simply wanted that day to be part of my story.  Leaving out Maryland, the highest number was the 102 seen on May 25, 2019 with Mike Resch in New Hampshire.  The fewest seen were 51 on the Big Island in Hawaii on February 6, 2019 with Lance Tanino.

I have not kept track of miles traveled, motel beds slept in or dollars spent.  Those are significant numbers, too, but my lists are only of birds.

Details and many photos are included in the blog posts for each individual state.  This summary overview picks just the top birds and a single favorite photo for each state and again thanks the birders that aided me so much.

For just the 5 Prairie/Midwest states, I saw 153 species.

Birded with Craig Mandel and a fun group of birders.  66 species seen.  Best birds were the 10 warblers and 3 vireos.  Favorite photo was of a Magnolia Warbler. 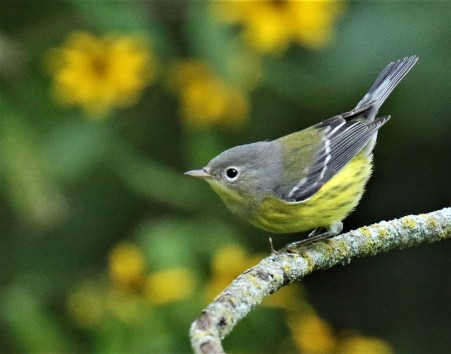 Birded with David Swanson and Paul Roisen.  59 species seen.  Best birds were an Eastern Screech Owl and a Field Sparrow.  Favorite photo was of a White Breasted Nuthatch.

Birded with Paul Roisen and Bill Huser.  59 species seen.  Best birds were a Blue Grosbeak and a Lark Sparrow.  Favorite photo was of a Sedge Wren.

Birded with Michael Willison and Knut Hansen.  91 species seen.  Best birds were a Sabine’s Gull, a Dickcissel and a Peregrine Falcon.  Favorite photo was of a Yellow Throated Vireo.

There were no new ABA Life birds nor any new ABA Life photos on the trip but the photos of the Sedge Wren and Yellow Throated Vireo were significantly better than others I have taken.  The birding itself was quite different than in most of the other states as the role played by lakes and surrounding areas was critical in each state.  I was continuously surprised to find little pockets of important diverse habitat in these lake areas and out among the seemingly endless fields of soy beans and corn.  To a greater or lesser degree in each state, the number of species seems larger than expected due in significant part to the presence of both eastern and western species.  This area is the easternmost range for many western birds and the westernmost range for many eastern species.

My appreciation of and thanks for the help from the extraordinary birders who were kind and generous enough to join me cannot be understated.  Great times in the company of great birders and great folks.  Many thanks.

4 thoughts on “Prairie States Wrap – Up – Nearing the End”