Since pelagic trips start early in the morning, I generally try to spend the previous night in Westport and get in some coastal birding that day.  In September the shorebird migration is generally in full swing and there is a good chance to add to state yer lists and maybe to find something truly rare.  Paul Baerny is doing a Big Year in Washington and he was going to be on the Saturday pelagic tip, so it was a good chance to join forces and bird together.  Young birder Garrett Haynes came with Paul and we all met Michael Charest who was in the area for a bit – before returning to his temporary home and birding paradise in Florida.

We met at the Hoquiam STP – not real birdy but we did have a Red Necked Phalarope and a Pectoral Sandpiper.  A Cooper’s Hawk was on a telephone wire but the Ospreys that had been there for the summer seemed to have departed. 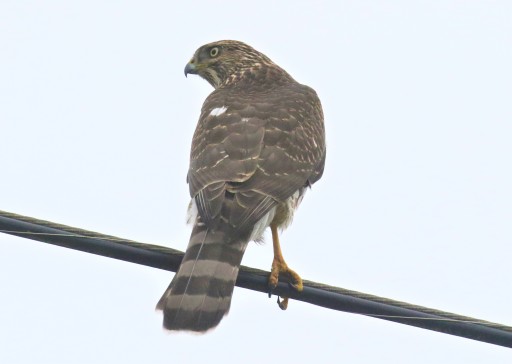 Then we were off to Griffiths Priday SP just north of Ocean Shores.  Paul and I had been there a week ago trying unsuccessfully for the Buff Breasted Sandpiper and Red Necked Stint that had been seen there.  Our timing was bad that day as we missed  those rarities – the same fate as others that day as well.  The “Buffy” was seen on later days but had not been reported for many days now.  Nothing real special this day either but we had 32 species including another Pectoral Sandpiper and a photo friendly Red Knot.  I did not notice it at the time, but a later examination of my photos found one of a Baird’s Sandpiper.  I had seen both the Knot and a Baird’s Sandpiper before, but these were my first photos for the year. 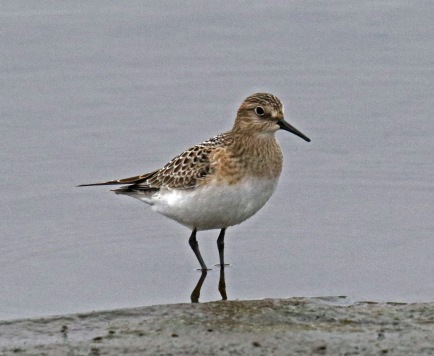 We found a few Whimbrels and there were many Sanderlings, Western and Least Sandpipers.  I got a fun photo of a Western Sandpiper with a worm – fun but out of focus unfortunately.  There was a momentary excitement as we thought we might have had a Black Legged Kittiwake among the many gulls at the creek mouth.  Unfortunately just a juvenile Bonaparte’s Gull.

We next drove the open beach near the Casino at Ocean Shores and found very few birds as the tide was way out.  I got a photo of a Whimbrel but nothing else even appealed for a photo. 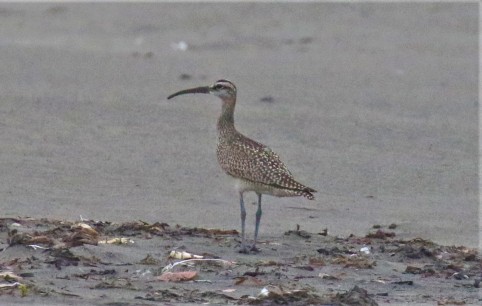 Next up was a visit to the Point Brown Jetty.  Again the tide was way out and this could have helped or hindered our prospecting for “Rock Pipers”.  We saw some Black Turnstone at the end of the jetty and then Paul spied what at first we thought might be a Rock Sandpiper (early but welcomed by me as I had not seen one this year) but it proved to be a Surfbird – good views as we got closer and it moved into the open.  Then Mike spied a Wandering Tattler.  I had seen one here earlier in the year but it had been distant and impossible to photograph so this was a nice find. 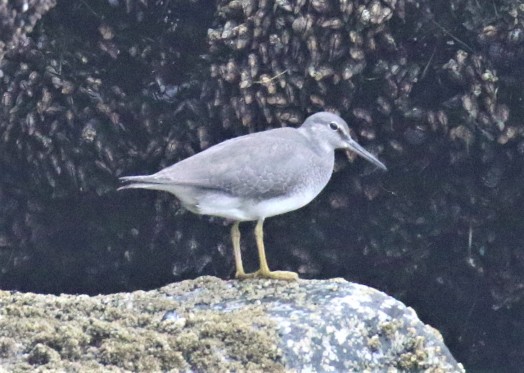 Then on to the Oyhut Game Range.  I have had great birds here over the years but had not visited it in 2019.  I was pleased to see that a new trail access had been created from the Radar station entrance.  Unfortunately birds were few and far between.  There were many American Pipits on the sand and in the salicornia and on the way back to the parking area we had a very surprising Yellow Headed Blackbird there.  It was a new Grays Harbor County bird for all of us.

Unfortunately no Ruff or Golden Plover both of which have been seen there frequently in years past.  Also no Upland Sandpiper which Paul was praying for and which I had been fortunate to see there 6 years ago.  And as long as we are talking about what was NOT seen, we also did not see any Lapland Longspurs which were a possibility or any Smith’s Longspurs – a super rarity which Paul and I had seen there in 2013.

Michael had to get back to Tacoma as he was flying out on Saturday – why he would not be joining us on the pelagic trip, so we headed east with him continuing to home and the rest of us revisiting the Hoquiam STP before continuing on to the Westport side of the coast.  Nothing new at Hoquiam.  There would be time to visit Tokeland for Marbled Godwit before heading back north to Bottle Beach to be there three hours before the incoming high tide.  Tokeland continues to be the go to place for Willets in Washington and we had 8 there in addition to a small flock of Marbled Godwits and a single Short Billed Dowitcher.  Most impressive were the 250+ beautiful Heerman’s Gulls.

I expect I have written this before.  Bottle Beach is a premier spot for shorebirding on the Washington Coast.  In the Spring it is a great spot for Red Knots often with hundreds there in full breeding plumage and very close.  Almost all of the Washington shorebirds have been seen there at one time or another including rarities like Ruff, Red Necked  Stint, Lesser Sand Plover, Sharp Tailed Sandpiper and Hudsonian and Bar Tailed Godwits.  There was also a Laughing Gull.  The key to success there is being “on the mud” 3 hours before high tide.  We often see people just coming out to the mud as we are returning to our cars 1.5 hours before high tide.  By then the show is generally over.

We arrived at Bottle Beach at about 3:40 pm with the high tide scheduled to be around 7:00 pm.  The tide was way out.  There was lots of mud and two birders were out at its edge.  We did not see any birds except for gulls and 4 Black Bellied Plovers.  One of the birders was Anna Kopitov from Seattle who would also be on the pelagic trip the next day.  As she walked over to join us, she said there had been lots of birds just before we arrived including a Red Knot, and lots of Black Bellied Plovers and Marbled Godwits but they had flown off in a group perhaps scared off by a Peregrine Falcon.  We watched for awhile and no shorebirds flew in.  I could not recall a single time at this location when there at the right time when there were not many shorebirds.

We saw a single Least Sandpiper, maybe a hundred Brown Pelicans and easily 2000+ Double Crested Cormorants.  The gulls were primarily Ring Billed with a few California Gulls.  Anna yelled out “That’s a really mean looking gull.”  It was chasing a Ring Billed Gull and it soon became apparent that it was not a gull at all.  It was a juvenile Parasitic Jaeger.  The chase lasted only a few seconds and then the Jaeger did something I have never seen before.  It landed on the sand/mud and just sat – for at least 5 minutes.  It then flew off – definitely in good health but possibly not yet a skilled hunter/harasser.  Certainly a great photo opportunity. 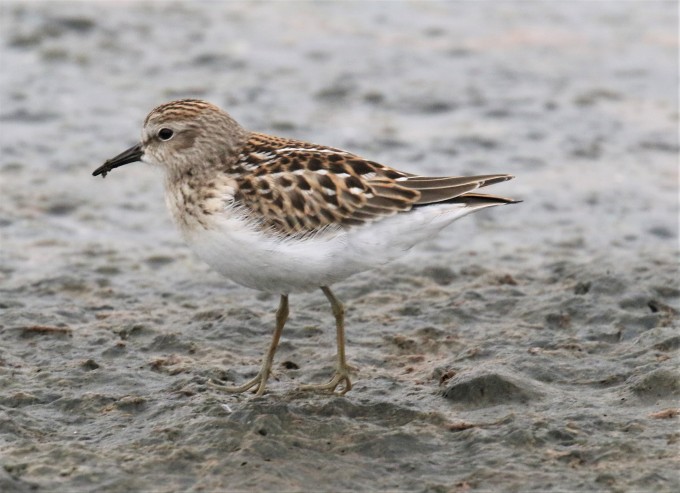 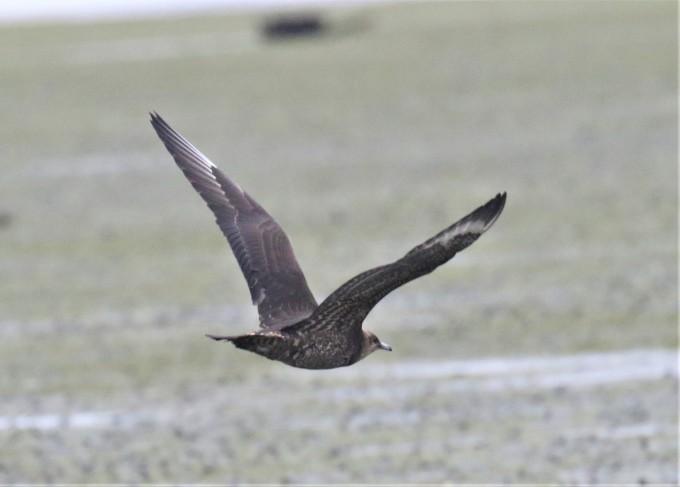 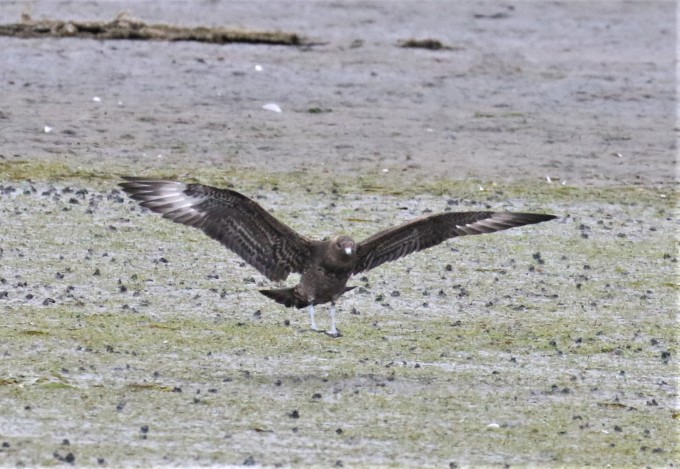 Shortly afterwards we were joined by Scott Mills who would be one of the spotters on the pelagic trip.  No new shorebirds arrived and we decided to leave and get to our hotels for the night.  Not more than a minute after we started to head back, Scott yelled out that a Long Billed Curlew had flown in.  Rare for the area, it had been seen there the previous day.  It was in with the gulls but finally came into the open for some photos.

The Curlew and the Jaeger were terrific observations for this spot and just in general, proving once again that there are usually consolation prizes even when targets are missed.  The most important thing is to just get out there and look.

I tallied up the species seen for the day and was over 70, pretty good since it had never seemed very birdy and there was no effort to look for passerines or to develop a long list.  Just another very fun day at the Washington coast.