I had flown into Boston on April 29th and had a lovely visit with my daughter, son in law and grandson.  That was a great start to what was planned to be a very long trip lasting 30 days, visiting 15 states and birding in 13 of them – hopefully adding all 13 to to the “completed list” on my 50/50/50 Adventure.  The quest was simple – observing 50 species of birds on single days in each of those 13 states – with others – visiting new and interesting places and having fun.  It was now May 2nd and I would be meeting good birding friend Mike Resch in Willington, CT to start the birding part of the adventure. 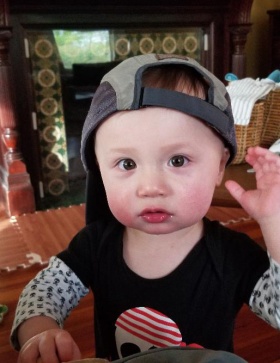 Mike had already been a big part of my project and his role would expand greatly on this trip.  We had birded together getting 50+ species in Massachusetts earlier.  Now Connecticut.  Then together to Rhode Island and at the end of this Marathon we would bird together again in New Hampshire.  I could not have been in better company or with a better birder.  I had learned from my other trips to look for “common birds” around my hotel before the hotspot birding began.  Species like House Sparrow, American Crow, Common Grackle etc would probably be seen later, but just in case not, get them and count them early.  If nothing else it would create some momentum.  I had 5 species in hand before Mike arrived.  Now we were off to one of Mike’s favorite areas – the Yale Forest and Boston Hollow and Kinney Hollow Roads – classic New England Forest.  I had checked out the area the previous afternoon and found it mostly quiet but still had 25 species including a Tom and Hen Wild Turkey – a very New England species to me – think Pilgrims and Thanksgiving. 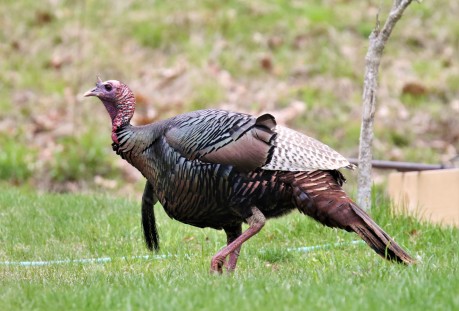 We spent over three hours in the forest and aided enormously by Mike’s great skill and especially his encyclopedic knowledge of bird songs, we had 51 species.  It wasn’t the best light for photos and many of the birds were high up or buried in dense foliage but lots of good ones including 5 woodpecker species, 5 sparrow species and 7 warbler species. 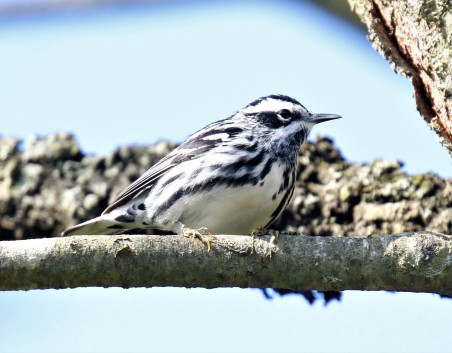 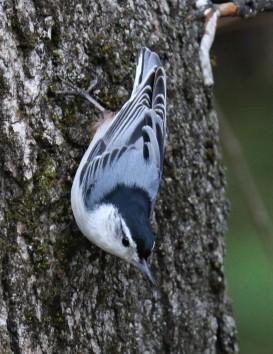 Only two flycatchers – Least Flycatcher and Eastern Phoebe and a single vireo – Blue Headed – lousy photo but better one later.  There would also be a better photo later of one of my favorites – Rose Breasted Grosbeak.  Two species heard and seen briefly but sadly not photographed were Northern Waterthrush (2 individuals in still water just where Mike expected them) and Louisiana Waterthrush (in moving water, again just where Mike expected them). 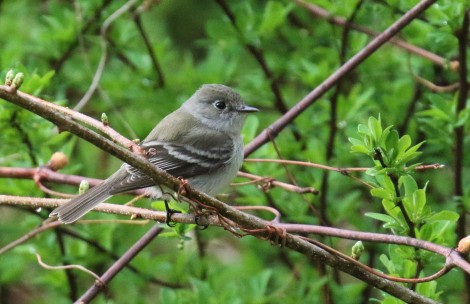 It was now about 11:00 a.m.  I had 53 species for the morning.  Quit now?  No way; we had two more great stops ahead and would be joined by two of Mike’s friends.  It was a great start but truly the best was yet to come.  We picked up a couple of incidental species along the way and arrived at Sandy Point on the coast in New Haven County.  There were lots of Brant close to shore and we had some Red Breasted Mergansers. 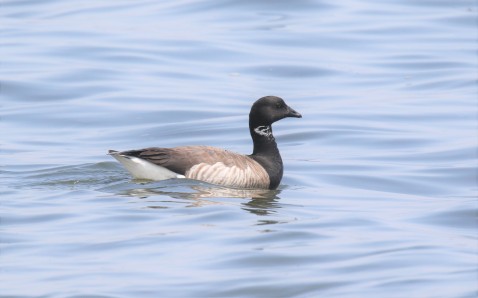 Among the six shorebird species were numerous Piping Plovers – hard not to love.  We even saw one displaying.  Another favorite was the American Oystercatcher.  We have Sanderlings in Washington as well and I had seen many scurrying along the surf on the sand before I left, but they had been dressed in winter white.  These were in their very much different breeding plumage. 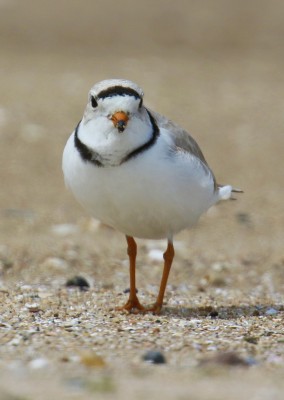 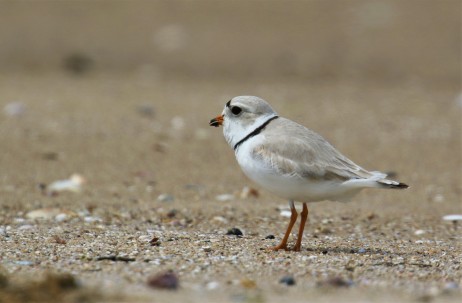 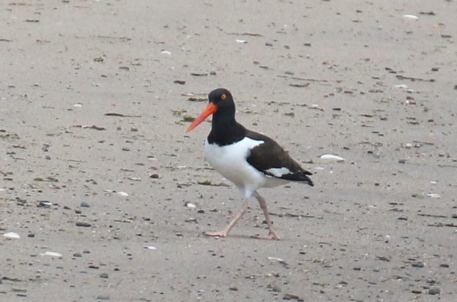 A species we do not have in Washington is the Great Black Backed Gull.  Big and with that very black back (or mantle) it is easy to see and identify.

We had 28 species in a bit over an hour and a half – many of them new for the day in this totally different habitat and our species day count was now at 79.  There would be more.   We got to Hammonasset Beach State Park at around 2:45 and heard birds as soon as we parked.  Then we saw birds – lots of birds – up close and personal birds – great birds – and many different types of birds.  Shorebirds, waders, gulls, flycatchers, vireos, warblers, sparrows and particularly thrushes.  Many trees had multiple birds and/or multiple species – maybe a mini fallout.  Lots of great photo ops. 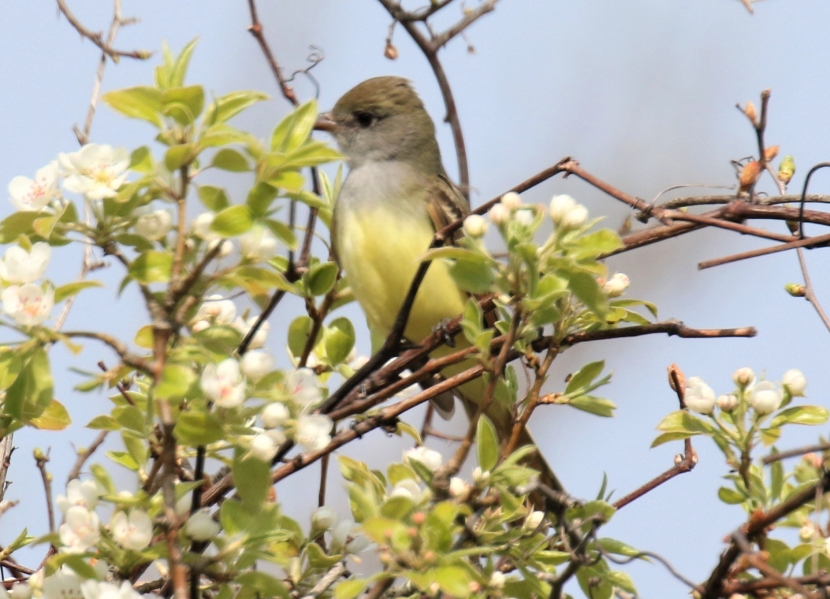 Warbling Vireo (We tried to make it into a Philadelphia Vireo) 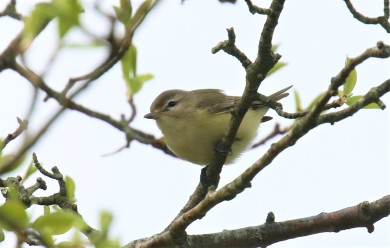 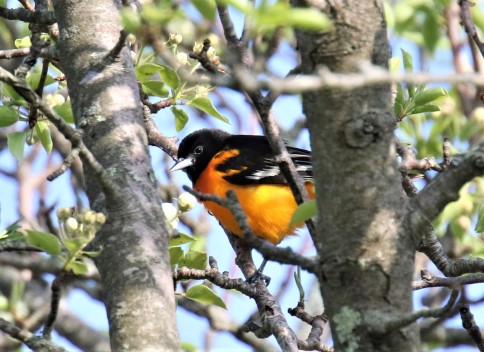 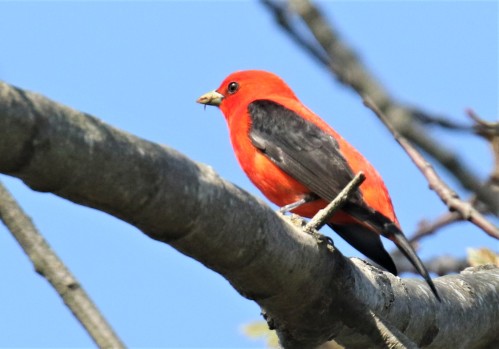 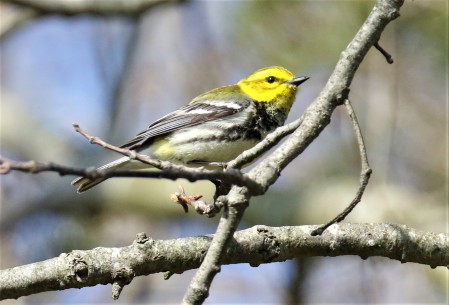 Particularly amazing to me were the Rose Breasted Grosbeaks.  We had at least 10 of these beauties including 6 in one tree!!  And equally special were the many thrushes – 7 species:  American Robin, Swainson’s Thrush, Veery, Gray Catbird, Eastern Bluebird, Gray Cheeked Thrush and Hermit Thrush – awesome!! 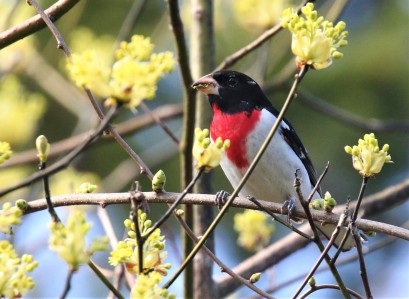 We were there transfixed on the so called low hanging fruit for just under 3 hours slowly covering almost 3 miles.  It was seriously about as good as it gets in beautiful weather as well.  Fifty species in all of which 22 were new for the day.  We later added a Chimney Swift and ended the day with 102 species.  How nice it would be if there was some kind of carryover and I could put the species above 50 into a bank and withdraw them as needed in other states.  It is my “game” so I can make the rules, but that is one rule that just doesn’t work.  One really good rule would be to include Mike Resch on all trips.  We would bird together in Rhode Island the next day so I certainly felt good about that.  BUT…

BUT…when you are out on the road, there can always be curve balls/surprises and we got a big one.  Mike and I checked into our hotel and unloaded optics and baggage into the room and went out for a quick dinner.  When we got back the card reader on our locked room door would not read our cards and let us in.  I have had this happen before where  maybe the card was next to the phone in my pocket and got de-magnetized or whatever.  Off to the front desk to get new cards.  But they did not work either.  Uh-oh.  The person behind the desk had a “master key” of sorts – another card since there was no physical actual key to gain entry.

It did not work either.  Now understand – everything we had except for the clothes on our backs was in the room and we would be leaving early the next day to go to Rhode Island for the next day of birding.  An offer of “I can get you another room and will get someone to look at it tomorrow” had no value whatsoever.  I won’t go through the ensuing details but maybe 30 minutes after the initial problem was discovered, a manager arrived.  She fortunately lived nearby.  It was clear to her as it was to me that the ONLY solution was to break down the door.  She forcefully, for her, kicked the door extending her leg in front of her…nothing.  Time for action. With her consent I turned away from the door and then back kicked it open breaking the jamb of course in the process.  We gathered our stuff and then moved to that now useful other room.

The Door – After the Kick

It is a little unnerving to know that there was no back up system to open the card reading lock.  If it was a bad battery, that could only be replaced if the door was open…no access from the front.  So a disaster was avoided even if we lost an hour or so and blood pressure was definitely raised.  We did receive an apology but maybe a comped room would have been in order.  Even at many chains, each hotel is individually owned by a franchisee.  Expressing displeasure on Facebook was considered…and then dropped as otherwise it had been a really good day.