Birding is NOT a static activity either moment by moment in the field or over time as we follow our passions.  I am updating my Thrush Dreams post from barely a month ago (December 21, 2018) because yesterday (January 22, 2019) with Steve and Connie Pink, I traveled to Nanaimo, B.C.  to chase a Dusky Thrush that had been reported two days earlier.  When I first heard of this mega rarity, I was returning from a wonderful trip to New Mexico – part of my 50/50/50 project that will get at least one blog post of its own later.  I had never been to Nanaimo and had it pictured in my mind as “close to Alaska”.  Wrong!  It is a 2 hour ferry ride from the Tsawwassen Ferry terminal outside Vancouver, B.C.  When Steve contacted me late on Monday – after I had returned from a great day of birding in Kittitas County with Frank Caruso and Deb Essman (another blog post to come) and corrected my geography, I said sure let’s go. 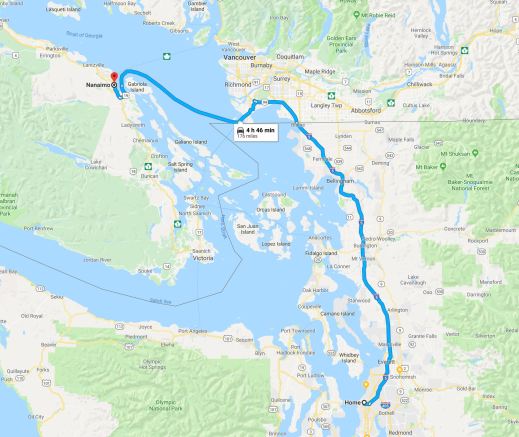 We left early Tuesday a.m.  At the border it was a repeat of some earlier experiences with Canadian Border patrol – friendly, efficient AND we learned he had actually read about the rarity when we told him the purposes for the visit.  The ferry was more like a floating resort with comfy seats, shopping and food.  No good birds on the way but an easy 2 hour ride.  We disembarked around 10:00 a.m. and were at the stakeout site around 10:15.  There was a single car there and we were able to visit with a birding couple who were not high powered birders but were very friendly and most importantly, they had seen the Dusky Thrush in the company of some American Robins 20 minutes earlier.  They seemed equally interested in a Palm Warbler that they had seen.  It is a good bird for the province BUT we were chasing the Dusky Thrush and that was our only quest. With the details of where they had seen it before it had flown off, we walked back up the road and began scanning trees near the house and barn.

There are many emotions that run through birders as we chase rarities.  The strongest of course is a strong “want/need/desire/hope” to successfully find the target.  In a case like this where we are on unfamiliar territory, have traveled a long way (although not as long as cross country chases that many birders do), are looking for a VERY rare bird, and it is the day after the last report, there is the uneasy nagging feeling that accompanies the questions: “Is it gone?”  “Are we too late?”  When our new best birding friends told us the Dusky Thrush had been seen, even though it had flown off, the odds were very, very good that it was still there and it was now just a matter of time.  So we scanned and waited.

About 19 minutes later, with only a few views of American Robins the light rain was feeling wetter, the temperature was feeling lower, and the light wind was feeling stronger.  Another minute later, our awareness of all of those changed dramatically when Steve, with our only scope, yelled “Got it!”.  The Dusky Thrush was perched on top of the large oak tree next to the house.  Protocol in such cases is for the spotter to get a “record look”, then stand back and let the next and next person get a look.  Connie got the second look and then just as I focused on the bird, it flew off.  Yeah, countable but not even close to satisfying let alone a photo opportunity.

There had been other birders on the ferry who were coming to chase this bird.  As we were alone, we wondered where they were.  It turned out they had all made wrong turns, gotten lost, regrouped and arrived about 15 minutes after our peekaboo view.  But they too now knew that the Dusky Thrush was here and there were now more eyes to continue the search.  About 15 minutes later, the Dusky Thrush was re-spotted – again just brief looks and a fly off.  A short while later, it returned and now it was on the ground, still distant, difficult to see and moving around but there were some good views.  For the next 20 minutes we watched it forage on the ground and even perch up on a wood post that was flat on the ground.  I tried for photos in the difficult conditions.  Sure wish I had the 800 mm lens that one of the birders had!!!

Best Photo of the Dusky Thrush

Final Photo Photo of the Dusky Thrush after it perched again in an even more distant tree.

The distance, poor light and interfering grass and gates and wires were all a challenge – so very poor photos BUT I got an OK photo, had OK looks and definitely had an ABA Life bird.  What rain?  What cold?  What wind?  It had seemed much longer, but it had only been 90 minutes since we had left the ferry and we would be able to return and catch the 12:45 ferry back to Vancouver and possibly have time to chase a Snowy Owl that had been reported in Skagit County the day before.  This was a very good chase.

We made the ferry, reveled in our good luck and then hit truly awful rain at Tsawassen which continued for the rest of the drive home.  The Snowy Owl had not been seen by anyone tht day and in the awful rain, we probably would not have tried for it anyhow.  Guess we would just have to “settle” for the Dusky Thrush.   And that was just fine!!

My original Thrush Dreams blog post was inspired by the successful Fieldfare chase to Salmon Arm, B.C, about 350 miles away from Nanaimo.  British Columbia is a HUGE province.  That fact plus it being somewhat closer to Alaska and there being many excellent birders has resulted in many rarities like this one.  My three rarest thrushes are from B.C. now adding Dusky Thrush to Fieldfare and Redwing.  Now we need an  Eyebrowed Thrush!!

So I need to already revise my Thrush Dream  as the Dusky Thrush is thrush number 16 I have seen in the ABA Area and there now “only” 11 that I have not.

A White Throated Thrush continues to be seen in Madera Canyon in Southeastern Arizona.  If somehow it remains after I return from Hawaii the second week in February, maybe I will give in to temptation and go.  And I will definitely be waiting for an Eyebrowed Thrush sighting in B.C.  Steve and Connie Pink are ready to go as well… 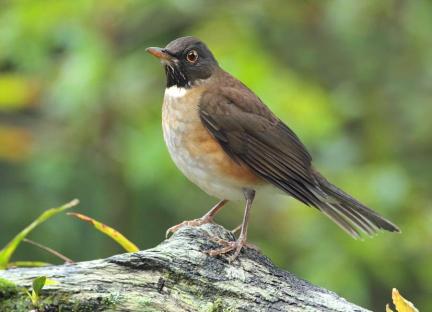 One sad note…  Great friend Melissa Hafting who has been my fabulous source of rare bird information and assistance in B.C. and who is an extraordinary birder with a first focus on B.C. birds is currently in Ecuador.  She is having a great time but is really hoping the Dusky Thrush remains until her return.  I hope so, too.