This was a quick trip with the priority being Thanksgiving with my son Alex, daughter Miya, son-in-law Lester and most importantly my grandson Griffin.  Late November may not be the ideal time for birding in Massachusetts, but I had an extra day and I had an excellent co-conspirator.  With the superb care and guidance from Mike Resch I was able to find 59 species on a cold and windy day – and I now had met the 50/50/50 goal in my 21st state.  The species count did not include the wonderful Thanksgiving Turkey.

My first interface with Mike Resch was in October 2016.  He was coming out to Washington from Massachusetts to work on his “project” – observing at least 50% of the species recorded in each state.  So for example, the list of birds ever observed in Washington stands at 521 (including some that have only been observed once and many that have not been observed for many years).  Mike’s goal (obsession?) is thus to have observed at least 261 species in the State.  Not terribly hard if you live here, but requiring many days over more than one season at the very least.  And after Washington – there would still be ANOTHER 49 STATES!!! Yikes… Mike had reached his goal in Washington but then Neah Bay started producing several new species for the State and he was no longer over 50%.  Time to visit Neah Bay.  He had seen some of my posts about visits there and contacted me for some advice.  He had a great visit but added to and solved his problem at the same time when he found the first record of a Prothonotary Warbler for the State on November 5, 2016.  Dan and Brad Waggoner were there that day and also got looks and a gorgeous photo. (As an aside, Brad found another Prothonotary Warbler at Neah Bay at a different location this October!!) 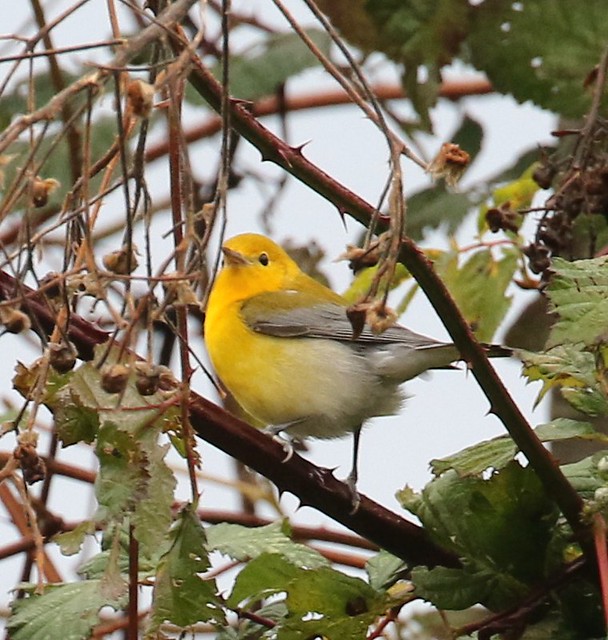 Later that month I was in Massachusetts (again for Thanksgiving) and I joined Mike for some birding on November 26th with our two targets being a Tufted Duck and a Pink Footed Goose, the latter of which would have been an ABA Lifer.  We succeeded in finding the duck but the goose eluded us.  I was not aware of it until I did some research for this post, but we actually had 50 species that day.  The Pink Footed Goose had turned up later in the day so I returned to Artichoke Reservoir and found it with the aid of another birder the next morning.  I took no photos on that trip at all but since this post will be light on photos, I am including my ABA Pink Footed Goose photo from British Columbia last year.

Hoping to “officially” add Massachusetts to my “completed list” for the 50/50/50 project, I contacted Mike and he graciously agreed to help with my quest.  Back to his “project”.  Whether it is a Big Day, a Big Year or some crazy quest like his or mine, good research, good information, good logistical planning and good luck are very important.  Working with others in our birding community is not only the best way to assure success, it is also the best way to really enjoy the experience.  My little project pales greatly compared to Mike’s – just incredibly impressive for him to have accomplished what he has.  Since a main purpose of my project is to interact with interesting people along the way, I very much wanted Massachusetts to be with him.  More details about that when I write up my 50/50/50 adventure somewhere other than just on a blog post.  Another benefit of working with him was that he did all the work – planning out where we would go and even doing a scouting trip to be sure the itinerary would work.

This being Massachusetts, rather than meeting at a Starbucks, we met at Duncan Donuts.  I saw MANY on my visit and do not recall seeing a single Starbucks although I know there are some there.  And, oh yes, as you can see there was snow on the ground.  This was to be my only “winter” trip trying for 50 species and this was the only time there was some snow.  Of bigger concern were the frozen ponds that may have hampered our success finding some ducks and shorebirds.

I had seen six species on the way to our rendezvous – only 44 more to go.  Our first stop was at Joppa Park in Newburyport where we had 16 species with the best being a singing Eastern Phoebe (late), a flyover flock of Snow Buntings and a flock of Long Tailed Ducks on the water.  Mike said we could not count the two Penguin statues nearby.  We moved on to Parker River NWR, a great area where Mike and I had birded two years earlier.  At several spots within the refuge over 2.5 hours we found 50 species even though ducks were relatively scarce and we had no shorebirds at all.  Some more Long Tailed Ducks and hundreds of Scoters.  We clearly identified some of all three Scoter species: White Winged, Surf and Black with the latter being the most numerous at least for closer birds.

There was a light dusting of snow – made it prettier and did not deter ground feeders.  We had small groups of American Tree Sparrows, Dark Eyed Juncoes (Slate Colored) and Snow Buntings.  We had a single Ipswich type Savannah Sparrow and a couple of White Throated and Song Sparrows.  The Tree Sparrows were by far the most numerous.  I wasn’t taking many photos (and had only my point and shoot camera) but here are a few.

A photo I wish I could have gotten was of a small flock of Lapland Longspurs that flew overhead with their chirping flight calls.  With the snow on the ground, it felt like I was in the Okanogan in Washington which in the winter is where thee can be huge flocks of Horned Larks, smaller flocks of Snow Buntings and Lapland Longspurs mixed in.  It is also a good place to find Tree Sparrows.  All of these species were found this day – “Okanogan East”.  Having crossed the 50 species threshold with time to spare, we headed to Rockport hoping for some alcids.

At Andrews Point at Rockport we immediately found a flock of Common Eiders (my first for the year) and had a flyby Northern Gannet (another FOY).  We saw more Long Tailed Ducks, Harlequin Ducks and again many Black Scoters.  A single alcid appeared right below us.  We got a fleeting look before it dove and … disappeared.  The field mark that caught our attention was a line on its face curving down from and behind the eye.  We both immediately concluded it was a winter plumage Common Murre.  If so it would have been the first on the coast this year.  After further reflection later, Mike was pretty sure that it was instead a juvenile Razorbill – more likely at the time and place.  The juveniles can have a similar line behind the eye.  I changed the report but am now having second and third thoughts as I was pretty sure I had checked the bill initially hoping for a Thick Billed Murre which is an extreme rarity in Washington as opposed to the abundant Common Murres.  I did not remember it as a large bill which I associate with Razorbills.  Of course in Washington, we never have Razorbills.  I have only seen them in summer in Maine.  I wish we had photos to study.

We had both an adult and a juvenile Northern Gannet.  I got flight photos but they are terrible so I am including one from Maine in the summer of 2015.  Gannets are closely related to the Boobies and certainly look like them to me.  This has been by far my best year for this group as I have previously seen Masked, Brown, Red Footed, and Nazca Boobies and am happy to add the Gannet to the list.

We continued on to a couple of other places in the Rockport/Gloucester area without finding any more alcids or adding new species.  We were at 57 species for the day and it was time to head home for Thanksgiving preparations.  I added a Turkey Vulture and a Western Grebe on the way home (making one more waterfront stop hoping for something new).  Birding with Mike had been great fun and very educational as he recounted stories of Massachusetts and some of his other states.

Mike also provided another great bonus.  He has created an interactive map that he uses to graphically display where he has seen various species across North America.  He kindly provided me a copy that I have adapted to keep track of my progress as I try for all 50 states.  Massachusetts is state number 21 and I have plans for 2 or 3 more in 2018 before a big push in 2019.  This map shows the progress.  Thanks Mike.

I cannot resist adding one more photo to this post.  My grandson just became 9 months old.  He and his mom have been out with me on walks near their home in Newton, MA where I have seen some nice birds.  After Thanksgiving on one such walk I added three more species for this Massachusetts trip.  I look forward to the day when Griffin will know some of the birds we see and hope he will enjoy the time together.  In the meantime, I can at least make sure he has the right “birder look”.

2 thoughts on “Making the Most of Massachusetts with Mike”