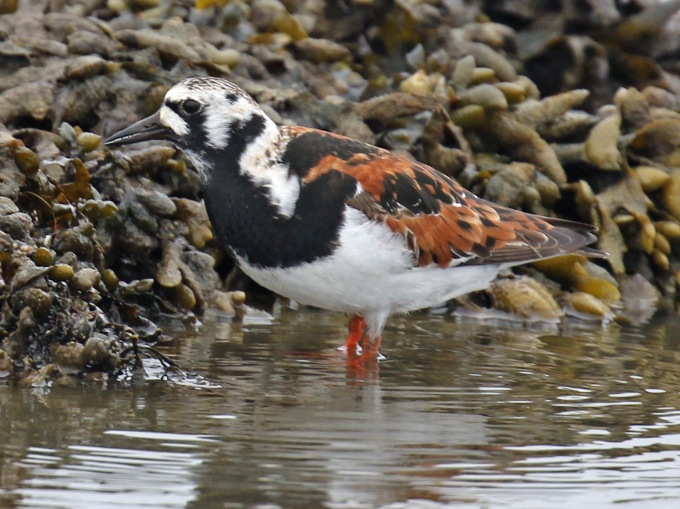 Late April and into May – time for shorebirds and passerines to migrate to and through Washington.  Always a fun time.

BUT FIRST I have to mention my 5 day trip to Boston – a chance to see my first grandchild – Griffin Pascal Leung.  Maybe he is going to be like me – always early – because he arrived a month ahead of schedule.  I waited an extra month to give mother and father a chance to get on top of things without me being in the way.  All is well with parents and child although it is a busy and often sleep-deprived household.  He is definitely a cutie.  He also makes a variety of noises that are very birdlike so he qualifies for this blog. 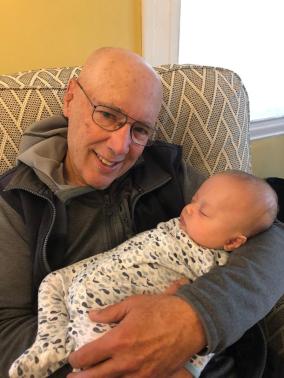 This was not a birding trip but I was able to fit in a couple of walks with a very focused goal of finally getting a photo of a Tufted Titmouse.  I had seen them in years past before I was taking pictures and it was definitely the most common bird without one.  It took a while to get the first one – at Mt. Auburn Cemetery and I then had many more after that. 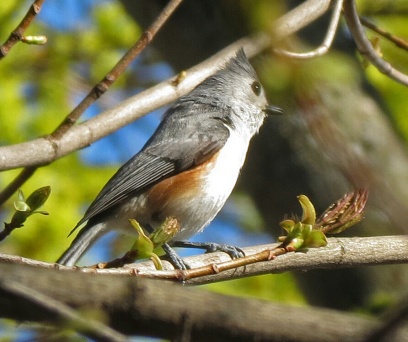 On May 2nd, since I arrived back in Seattle around 2:30 P.M., I was just able to beat the traffic and make stops first at the Montlake Fill and then Magnuson Park.  At Montlake I was able to find the Solitary Sandpiper (FOY) that had been reported there the previous day and at Magnuson Park I got to see the Lewis’s Woodpecker that was first seen three days earlier and is still being seen on May 5.  This woodpecker belongs east of the Cascades and there are only a few records in King County over the past 20 years. 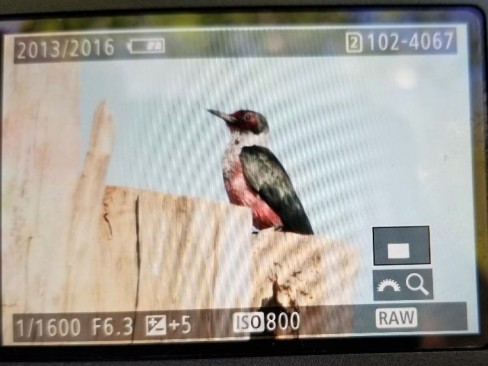 My body had no idea what time zone I was in when I finally got home but I expected I would wake up early thinking it was three hours later.  I did and decided without any planning to just take off and head to the coast to see what shorebirds were around.  I was on the road by 4:30 a.m. and there was still traffic – although not too bad.  My first stop at Brady Loop was without any shorebirds in the sometimes productive fields.  It was a little better at the Hoquiam STP and Bowerman Basin.  At the former I had my first Long Billed Dowitchers of the year and a photo friendly Killdeer.  Like so many other formerly great shorebird spots, changes at this location have gotten rid of much of the “mud” so I was pleased to have anything there. 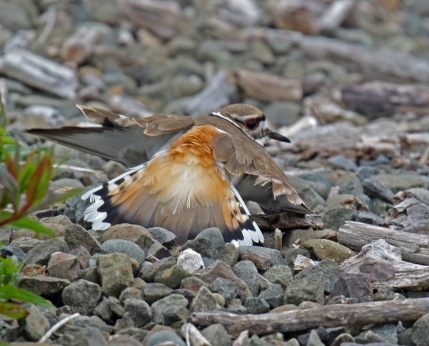 The tide was very low so there was tons of mud at Bowerman Basin, but that meant that the birds – probably more than a thousand – were far out.  Gray skies did not help photography.  Most were Western Sandpipers, although there were also several hundred Semipalmated Plovers and some Least Sandpipers.  There were only two “larger” shorebirds – and both were of note for me.  One was my first Whimbrel of the year and the other was a single larger plover.  The photo is not very good, but does support the ID as a Golden Plover which was clearer through the scope even with some of the breeding plumage “golden” flecking on the back.  The Whimbrel was too far away for any kind of photo. 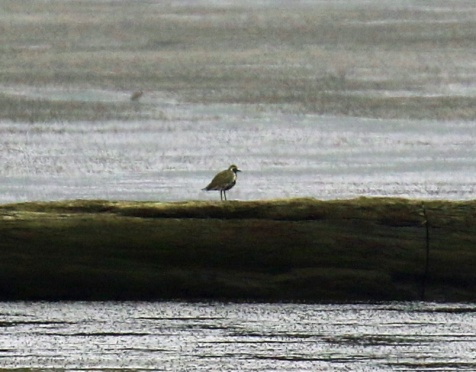 I debated going on to Ocean Shores but I knew I wanted to be at Bottle Beach around 1:30 and was not sure there was time for that as well as Westport, so I retraced steps through Hoquiam and Aberdeen and hit Westport.  There were only a few but I did see my FOY Brown Pelicans in the marina and then was able to find a single Wandering Tattler at the “groins” – rocky outcroppings on the jetty near the lower observation platform near the restrooms.  This has been my most productive spot for this species at Westport over the last few years. 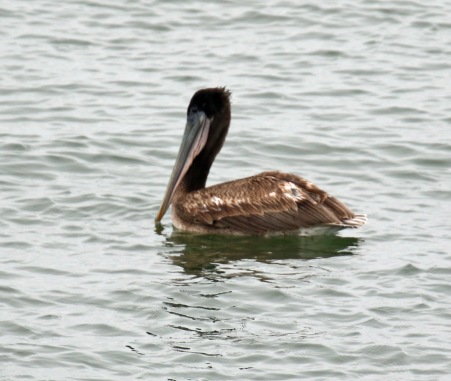 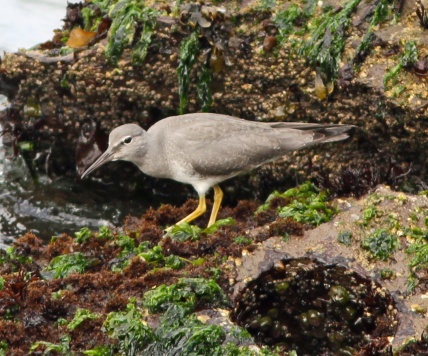 The tide was still very low when I hit Tokeland and zero shorebirds were there.  As had been the case at Westport, there were a number of Common Loons and a single Pacific Loon as well as several Pigeon Guillemots.

I then drove the beach starting just north of Grayland.  There were thousands of shorebirds but nothing “special”.  The only species I saw were Western Sandpipers, Dunlin, Semipalmated Plovers, Sanderlings and a few Least Sandpipers.  I was surprised to find no Black Bellied Plovers.  Most of the Sanderlings were still in basic plumage but the other species were more than 75% in breeding plumage.  I saw no larger shorebirds at all. 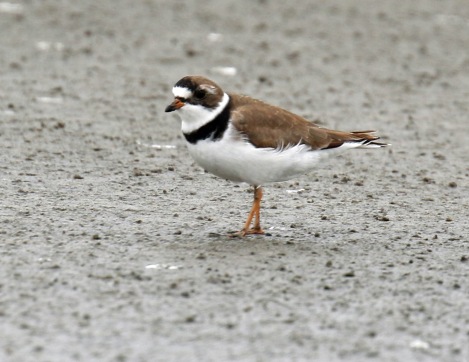 I arrived at Bottle Beach at 1:30 – three hours ahead of the scheduled high tide.  Several cars were already there and birders pulled in as I arrived.  I was hoping for some Yellow Warblers on the way out to the water but found only Common Yellowthroats.  That was a bit disappointing but the shorebird show more than made up for it.  Although the tide was still way out and there was lots of exposed mud, there were already hundreds of shorebirds there more than 2.5 hours before high tide.  About 10 birders as well including a surprise visit by Virginia, Kathleen and Joyce from the Pilchuck Group – great to see them.

The main target bird at Bottle Beach in Spring is the Red Knot.  I have seen hundreds there at one time before.  Probably only 30 or so this time, but they were readily seen and are always a treat for photographers.  This is often a great spot to find Ruddy Turnstones and there were at least two in their very striking breeding plumage.  As the tide came in, the birds were more concentrated and closer and as most were in breeding plumage, there were great photo opportunities.  Species seen included the Knots, Western Sandpipers in the thousands, hundreds of Semipalmated Plovers, 20 or so Greater Yellowlegs, maybe 60 Black Bellied Plovers, 100 or so Short Billed Dowitchers and although there must have been more – a few Least Sandpipers.  We looked in vain for Curlews, Godwits and Whimbrels but found none. 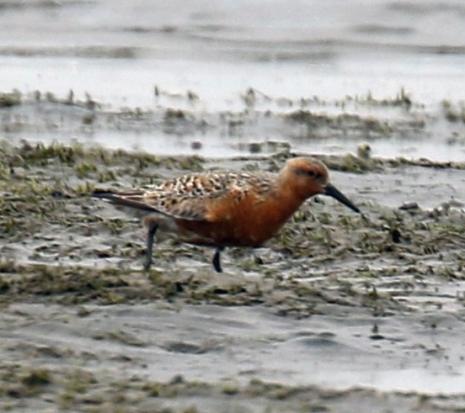 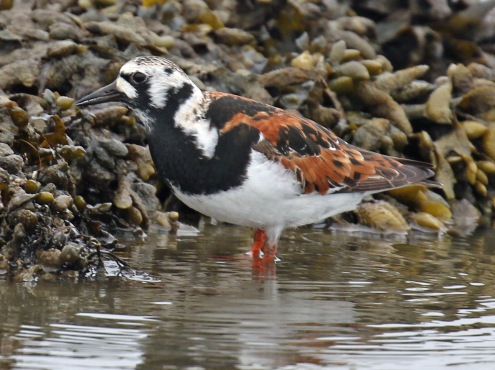 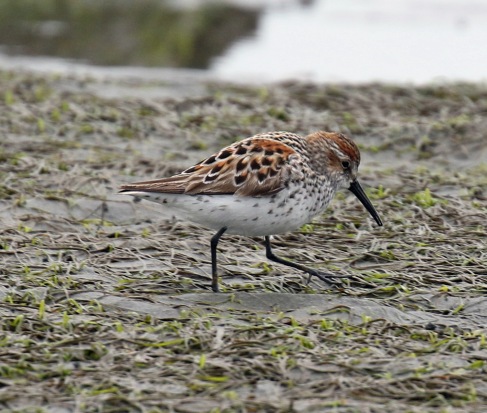 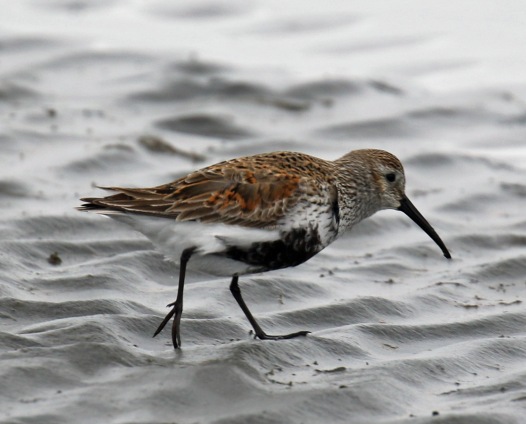 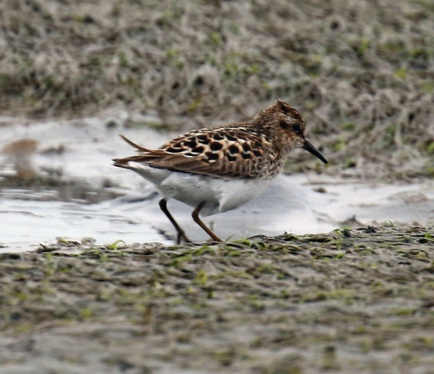 Time to head back.  Thinking there might be some migrants at the Hawks Prairie Settling Ponds, I stopped there on the way home.  Nothing special so I carried on to Nisqually – again looking for a FOY Yellow Warbler.  Maybe I just missed them, but again nothing unusual there.  Several Yellow-rumped Warblers greeted me – both Audubon’s and Myrtle forms and there were some Common Yellowthroats but no other warblers at all. 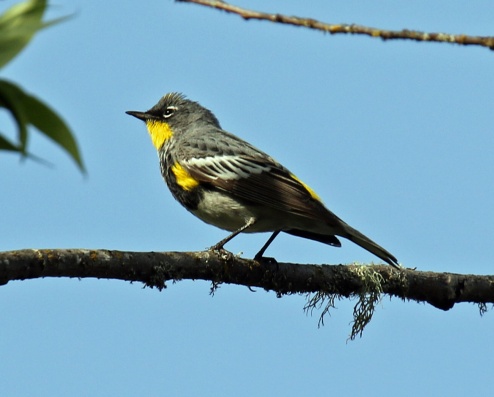 There was only the briefest delay around JBLM and I was home by 7:30 p.m.

Jet lag caught up with me the next day and I stayed home to catch up on day to day stuff left while I was away.  Also hit the gym for the first time in a week and worked on bird photos and lists.  A few days before I left for Boston (and before the Eastern Washington trip reported on in my previous blog post), I had gone up to Homeacres Road in Snohomish County to see the Black Necked Stilt that was found there by David Poortinga.  It is a rare species west of the Cascades and was my first in the County.  At least in Eastern Washington, they are often associated and seen with American Avocets.  An American Avocet was now being seen in Redmond in King County and this morning (Cinco de Mayo), I decided to look for it and then head on to Marymoor Park – again looking for Yellow Warblers.

I quickly found the Avocet along with a lot of other birds in the wet fields just east of Willows Road and South of 124th.  Also present were a number of duck species, lots of Savannah Sparrows, 5 Greater Yellowlegs, 6 Long Billed Dowitchers, 100 peeps (more Western than Least Sandpipers) 10 Killdeer and more than 50 American Pipits.  As best I can tell, there have been only a few Ebird records of American Avocet in King County over the past 20 years – a nice bird. 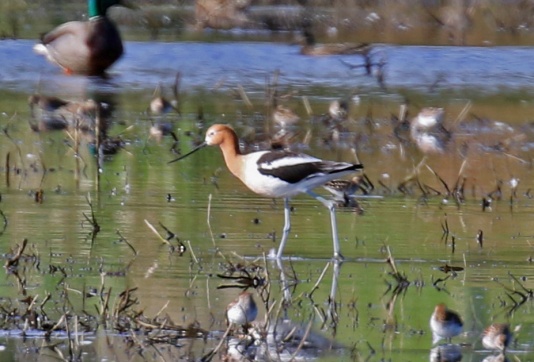 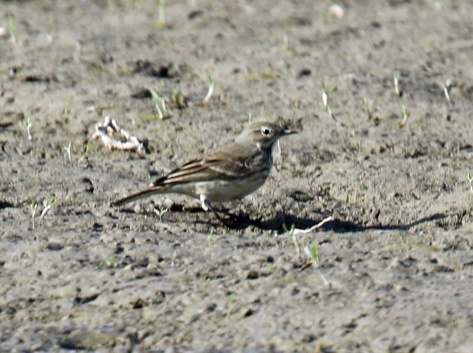 At Marymoor Park, I was able to find (heard only) my first Black Headed Grosbeaks of the year but again found no Yellow Warblers – a single Nashville Warbler, some Common Yellowthroats and some Yellow Rumps only.  At one spot I was watching a male and female Downy Woodpecker chasing each other when first a male and then a female Purple Finch flew into the same view frame.  It would have made a great photo, but it was not possible (at least for my skills) to get them all in focus at the same time.  I settled for a photo of the two Woodpeckers. 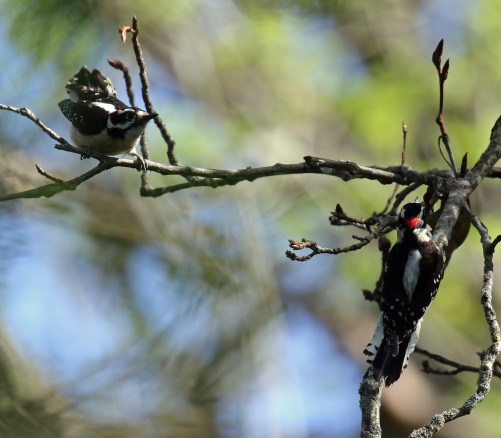 And then as soon as I got home, I saw that a Long Billed Curlew was being seen in the Snoqualmie River Valley.  I f I had known it earlier, I would certainly have gone looking.  Maybe tomorrow I will go looking and who knows maybe there will be a Yellow Warbler there as well.