My visit to the Okanogan in late December had been less successful than I had hoped.  Recent trips by others had been terrific perhaps aided by additional snow accumulation.  I was optimistic and hopeful, but the temperatures had warmed and some snow had melted.  I really was not sure what to expect.  I left Ephrata early on the morning of January 19th and headed towards Mansfield on the Waterville Plateau.  Fortunately the fog cleared and I started looking for Snow Buntings and Partridge.  Near Heritage Road (Road L), I found my first Snow Buntings and at their “regular spot” I found 5 or 6 American Tree Sparrows.  I had seen the latter with the Dennys earlier, but the Snow Buntings were new – and a “must” for this trip.

No Partridge anywhere.  Next I was on to Bridgeport Hill Road where I hoped to find Sharp Tailed Grouse.  There were none there and also none at a nearby place that was a potentially good spot.  There would be other chances, but this was a regretted miss.  It was on to Cameron Lake Road.  In December there had been so much fresh snow that I was not able to drive the entire road.  But on the small portion that I did drive I had Snow Buntings, Gray Crowned Rosy Finches and Common Redpolls.  There was far less snow now and in fact most of the road was clear.

About 7 miles in, from the southern end of the road. I came upon a Seattle Audubon Trip that was led by Stefan Schlick.  I met up with them 5 minutes too late.  They had just seen a Gyrfalcon.  They had watched it for some time and it had flown off.  I joined them as they continued on hoping for more looks.  We did not see it again.  This was now the second time this month that I had missed this prized bird by just a few minutes.  A bonus though was that Stefan told me about a good spot ahead for White Headed Woodpecker – “where the flag is over the road.”  Before getting to that spot I had a Northern Shrike, a Golden Eagle and a huge flock of at least 300 Snow Buntings – about 100 yards off the road.

It was impossible to miss the “flag spot” as someone had strung a cable across the road supporting  a large American flag.  I stopped, got out of the car and played the call and the drumming sound for White Headed Woodpecker.  Instantly first one and then another appeared – one flying directly over my head and not far from it.  A bit later a third appeared.  These woodpeckers are always a favorite and they were new for the month – #191.

Nothing else new on Cameron Lake Road and having seen American Tree Sparrows earlier I did not even stop at “their spot” on this trip.  I went on into Omak and then headed up towards Conconully.  Just out of town a dark Merlin flashed by me – far too fast for a photo but maybe a good omen.  Less than a quarter of a mile later on Epley Road, I saw a large flock of birds in a bare tree across from a small orchard.  Usually such flocks are Blackbirds or Starlings, but this was the Okanogan and there are other possibilities.  When I pulled off the road and got by binoculars on the flock, it was quite apparent these were one of those possibilities – a very large flock of Bohemian Waxwings – 130 birds or more.  I had seen this species earlier in the month, but this was truly a spectacle as they flew from tree to ground and then circled and then repeated the performance. 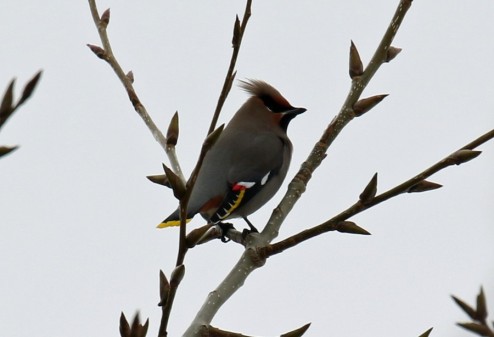 I continued on towards Conconully with my first stop being at the pasture where I had “missed” the Gray Partridge found there by Jon Houghton a week earlier when I visited in late December.  Missed them again.  Then I spent a lot of time searching for Sharp Tailed Grouse in the Scotch Creek area and on Happy Hill Road.  I had the grouse there on my December trip but only in the early morning – there were none now at midday.

When I planned this trip, I had counted on Gray Partridge and Sharp Tailed Grouse and had hoped for Gyrfalcon.  I wasn’t doing well with these “needed” species.  I had also planned – indeed almost counted on both Gray Jay and Clark’s Nutcrackers in Conconully.  Others had seen them there recently.  Two more misses despite very diligent searching and almost constantly paying various calls for both.  Thankfully though I got a coveted consolation prize as a small flock of Gray Crowned Rosy Finches flew over head and could be identified both by the quick look and also by their calls.  No photos but I was now at 192 for the month.

It was now on to the Highlands and a stop at Fancher Road.  I may have been there before, but I did not recall it.  The ABC Group from Tacoma had had large numbers of both Chukars and Gray Partridge in the cattle pastures.  I was stunned when I reached the area.  There seemed to be Chukars and Partridge everywhere.  In that “stunned” condition though, I confused the two species and thinking that Chukars are usually even harder to find than Partridge, bypassed photos of the Partridge which I had seen first and took MANY of the Chukars thinking I had finally gotten photos of Gray Partridge.  By the time I figured this out, the Partridge had retreated to the hills while dozens of Chukars and even more California Quail remained.  (Stay tuned – there will be more to this story.)

Well at least I had finally seen some Gray Partridge and my Big Month count stood at 193.  I headed off to the Havillah Sno Park Area hoping for a Great Gray Owl.  I have only seen one there once, but it is a good area for them.  But not today – and it did not help that this was the one area that was buried in heavy fog.  An owl would have had to have flown right in front of me to see it.  I decided to come back later at dusk and hope the fog had cleared.  I went on to Nealey Road.  I had heard that the feeders were still inactive the previous week, but I hoped that was old news.  It wasn’t.

In the past there have been many birds at the feeders – Rosy Finches, Waxwings and Redpolls among them.  There were birds today despite the absence of seed, but nothing extraordinary.  I got a nice photo of a Mountain Chickadee which shared a tree with a Black Capped Chickadee and then one of my favorite photos ever of a Hairy Woodpecker. 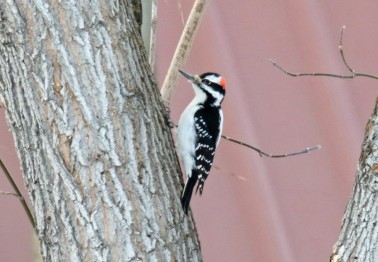 Just as I readied to leave I heard some chatter notes.  I had been playing this call earlier in the day and could hardly miss the sound of a Clark’s Nutcracker.  At least one and perhaps a second called from the hill behind the Nealey cabins.  I could get a glimpse in the distant trees – just enough to be sure they were not Black Billed Magpies mimicking the Nutcrackers – so at least one of the earlier misses was erased and I now had 194 species for the month.  I returned to the Havillah Sno-park.  There was less fog but no owls appeared, so it was off to Omak for the night.

An early start the following morning had me at Scotch Creek so early I could see almost nothing.  Two shadows in some Water Birches unfortunately late proved to be Great Horned Owls and not Sharp Tailed Grouse.  More searching as the light improved also improved by still obstructed view of the Great Horned Owls but produced no grouse.

Sharp Tailed Grouse had been on my “near certain” list and was an important find.  I was concerned.  The ABC Group had found some on Siwash Creek Road – near Fancher Road and the Havillah Sno-Park, so that became a priority.  I headed East via the Riverside Cutoff Road.  No Golden Eagle as I had in December, but at a spot I had had one before I found a Canyon Wren – singing its lovely descending note song.

When I stopped at Fancher Road again, I had even more Chukars – maybe as many as 80 – but no Gray Partridge at all.  Now I was worried that my error of the previous day might mean that I would get no Partridge photos.  But again, stay tuned.  Siwash Creek Road was perfect Sharp Tailed Grouse habitat and unlike at other good spots, here the Water Birch were close and at eye level.  Grouse, if present, would be readily seen and readily photographed.  Sadly, as far as I could tell – they just were not present.  Missed again.

I made another pass at he Sno-Park – fog-less, people-less and owl-less.  Time to head back home with another drive of Cameron Lake Road hoping that somehow the Gyrfalcon might give me the privilege of a view.  This time I did not stop for the White Headed Woodpecker, but I did stop at the copse of trees that were good for American Tree Sparrow. I found at least 9 and got a new favorite photo of one. 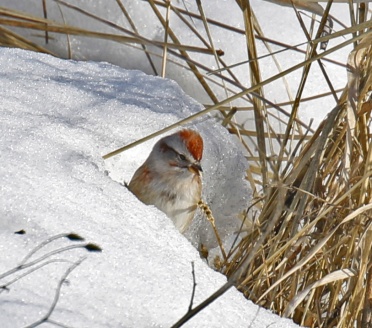 Also along the road, I had a Golden Eagle, a Northern Shrike – and to complete the story – finally – some photo friendly Gray Partridge.  I breathed a sigh of relief.  But not complete relief as I never saw a Gyrfalcon.

I tried once more and failed once more to find any Sharp Tailed Grouse along Bridgeport Hill Road – the major disappointment of this trip.  So no new birds this day.  I had done OK for the trip but not great.  My total for the month was at 194.  Including the prelude to the Okanogan, I had added 11 new birds – honestly about what I had originally expected but I had not expected some of the birds I did see and I definitely had expected two I did not – Gray Jay and Sharp Tailed Grouse.  And yet again missing a Gyrfalcon was a downer.  But when I finally got home – very tired – I was optimistic that 200 was reachable – just not sure exactly how.

One thought on “The Big Month Continues – On to the Okanogan”