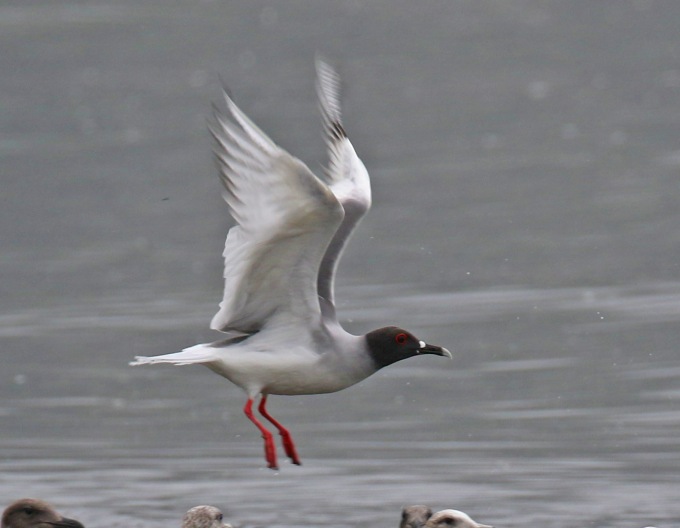 Quite a year – filled with wonderful birds and people and places – many filling previous blog posts in 2017.  Some repetition here is probably inevitable, but I will try to keep it to a minimum.  I just want to celebrate and summarize and then move headlong into the next year.

Somewhere along the way, I set some goals for birding as well as for personal matters.  Some of the latter did not go as well as I would have liked but this is a birding blog, so I will mostly skip those and reflect on the birding ones.  That said I do wish the others had been met and if it would have mattered, I would have given up the birding successes to achieve the others.

I hit the 100 goal on June 24th starting out in hometown Edmonds with a Barred Owl in Yost Park.  I added another 34 birds in Edmonds and then headed east picking up another 15 species in the Snoqualmie Pass area before moving on to one of my favorite birding areas, Kittitas County, where I added 36 species.  The 100th species for the day – a Bullock’s Oriole was found at the Wenas Campground in Yakima County.  I added 16 more species ending the day with a Common Merganser on the Tieton River. 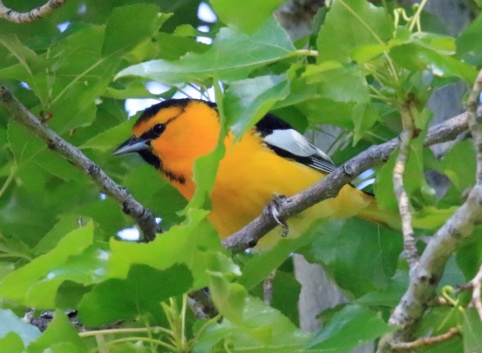 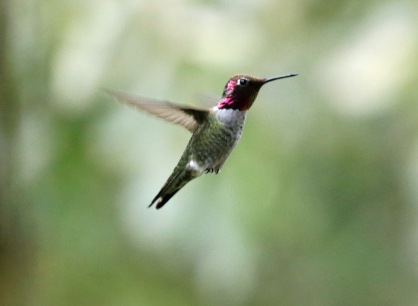 Although I wasn’t so sure at the time I set it, the goal of seeing 300 species in Washington for 2017 was readily reached (and surpassed).  Over the preceding 5 years I had averaged 355 species so 300 would have seemed “easy”, but in each of those years I had intentionally tried to maximize the species seen, and in 2017 much more time and energy was planned to be spent seeking birds outside of Washington in the ABA area going after some of my other goals.  The combination of some good birds showing up in Washington which led to adding both ABA birds and state birds for the year and doing more state birding than anticipated as some of my non-birding goals went astray, resulted in me hitting my 300 goal with a Solitary Sandpiper at the Redmond Retention Ponds on July 26th. 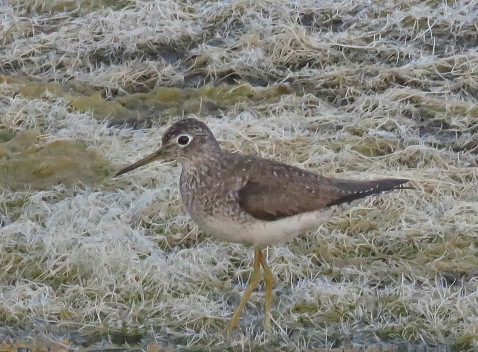 Getting photo number 400 of Washington bird species was maybe the highlight of the year.  As chronicled in my Blog Post: A Swallow Tailed Gull – Way Beyond WOW!! somehow a Swallow Tailed Gull which belongs in the Galapagos and had only been seen north of the Equator one other time, made it to Carkeek Park on the morning of August 31st just when super birder Ryan Merrill just happened to be there.  He recognized the rarity and got the word out to the birding community.  Even though I was 25 miles away in Bellevue at 6:45 a.m. when Ryan’s Tweeters post appeared, I somehow got dressed and with the miraculous absence of traffic was at Carkeek park and looking at this incredible find by 7:30 a.m.  I took a quick photo – and then many more – so this of all species turned out to be photo number 400 for Washington.

With goals, 5, 6 and 7 in mind, I had planned lots of travel in the U.S. for 2017 with trips to Arizona and Florida being the most important but there was also a mostly non-birding visit to San Diego in late January and a visit to the East Coast to see my kids that included a day with some birding on Cape Cod.  It was during the Cape Cod trip that I met goal #5 – seeing my 500th bird in the ABA area for the year.  It was a Mute Swan seen in a pond in Duxbury, MA on October 9th.  Mute Swans are occasionally seen in Washington but are not “countable” here as they are not considered an established species (and I disagree), however, they are well established in the East and countable as such in Massachusetts.  Given that inconsistent status, I night have preferred a “better” species for #500 for the year but it is a fine looking bird.

Goal 6 was the corresponding ABA accomplishment to Goal 4.  Instead of 400 species photographed in Washington, it was getting a photo of my 600th ABA species.  This one is a little embarrassing as I really do not know which specific bird on my Arizona trip was photo number 600.  I added MANY new photos on that trip and since I was not the one keeping the lists, some of the specificity as to exactly when each bird was seen and photographed is not clear.  I know it was one of the new birds/photos for August 3rd and my favorite bird that day was the Thick Billed Kingbird so I am going with that.

One more to go and this was the one that I did not think I was going to make.  It used to be that someone who had an ABA Life List of 700 species had probably spent many years and many miles accumulating that number of species.  Getting to that number was like gaining admittance into a special club – rarefied company.  It is still a pretty good club but with an enormously expanded membership as modern travel, communication and data resources has made 700 a number that many have even gotten in a single year.  That said, finding 700 species in the ABA area requires extensive birding in many habitats at many times of year, multiple “chases”, some skill and some luck and definitely some perseverance and drive – and maybe a little mental instability – at least according to non-birders.  It almost certainly requires lengthy and probably repeated visits to Arizona, Texas, Florida, Alaska, California, New England, the plains, the coasts, deserts and the mountains.  It probably involves multiple pelagic trips and visits to some famous birding meccas.

I had done most of the above – many back in my first decade of birding – 1971 to 1981 – and then some more lately.  I had visited Texas and Arizona and Florida and seen many of the “specialties” in those places.  I had more recently been to Maine and Colorado and Alaska and added 30 ABA “Lifers” on those trips.   But my concentration had been more on birds in Washington, so at the end of 2016 my ABA Life List was 664.  The “magical 700” was imaginable, but it would require some travel, lots of luck and some help.  I think I made up my mind to at least try for 700 when a Falcated Duck showed up in Washington in mid-January – a first new ABA bird for the year.  I made plans to visit Florida and Arizona – states where as I said I had previously seen many of the specialties, but where many possibilities remained – especially in Florida where a number of “exotics” were now recognized and had not even been on the list when I had last visited in the 1970’s. 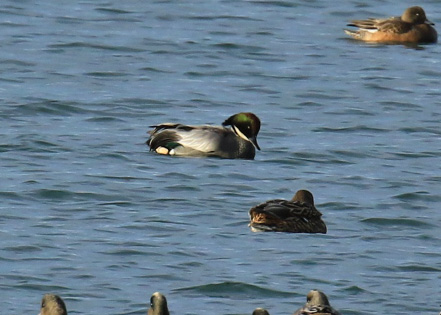 As it turned out, a couple of misses in Florida and some more in Arizona left me at 690 when I got back from Arizona on August 8.  One might think that it would be easy to add “only 10 more species” but without an expensive and maybe not even possible trip to remote Alaska, there just weren’t places to go to get more than a couple of birds at a time and I did not have the time, money or energy resources to make the 5 or 6 trips that would probably be required.  I decided I would just be happy with hitting goals 1 through 6 and then work on 700 in 2018.

Then a couple of unexpected new birds.  The aforementioned Swallow Tailed Gull showed up within just a few miles from my house.  That was 691.  In October at the end of a visit to old haunts on the East Coast and a visit to my children in Brooklyn and Boston, I squeezed in a few hours of birding on Cape Cod – getting that 500th ABA Bird for the year and adding Cory’s and Greater Shearwaters bringing my total to 693.  It still looked unlikely – especially as now it was already mid October – past migration and a time when new birds are less likely to find.  California might offer a handful of species, but preliminary study suggested that I could maybe get 5 new species and with some real luck – maybe a 6th.  Figuring it would be worse to get to 698 or even 699 after yet another expenditure of time, energy and dollars.  I decided to forego the trip.

Then two things happened.  I got a reminder from Alaska Airlines that I had some credit in my account from a changed earlier trip to California – no refund but credit towards another trip that would be lost if not used during this calendar year.  And I also got a reality check that the relationship I had been trying hard to build and preserve over the past year just wasn’t going to work.  We had both known for some time that despite so many good parts, those parts just weren’t going to add up to the “be all” relationship that had been hoped for.  No ill will or blaming – just a sad and disappointing reality and definitely some pain in the process.  I acknowledge that I often use birding as a distraction from those parts of life that are not so great to deal with.  I needed to get away.  The credit from Alaska Airlines would cover a trip to California.  As a minimum I would get some new ABA Photos and some new ABA year birds and I would get closer to the 7th goal as well.  So off I went.

The details were outlined in my numerous blog posts about the California trip.  It was helpful as a distraction and with the surprise arrival of three major unexpected rarities: Red Footed Booby, Garganey and Rufous Backed Robin, I was able to reach 700.

So after all the twists and turns, hits and misses, great places, great people and great birds all 7 of the goals for the year were met.  Some were met just barely and others were significantly surpassed.  Here is the scorecard:

Now what?  It is January 10, 2018.  I have set two specific goals for the year and have some others that are not defined.  The specific goals include a personal one and a birding one.

The birding goal is to do a “Big Month” – see how many birds I can see in one month in the State of Washington.  Since my undefined goals include several trips out of state during prime birding times, I have chosen the month of January and am pressing hard to maximize the number of species seen.  The most species I have ever seen in Washington in January was 154 – during a year where a goal was for a Big Year in the State so a month that had lots of birding.  I have birded every day so far this year and have been both driven and fortunate.  Earlier today I saw some Bohemian Waxwings that were found by David Poortinga in Marysville.  They were species 157 for the month.

I have  set the “minimally acceptable” target as 175 species.  One might think that already being at 157 makes that an easy “get”, but it gets harder to find new species each day.  I am traveling to Walla Walla later this week and we’ll see how I do.  With luck (and lots of help from Mike and MerryLynn Denny) I might be able to get to 170 or 172.  If so then 175 will be a given with some targeted additional trips elsewhere.  Research suggests that 200 species is at least a possibility – lots more travel and lots more luck.  If things go really well on the Walla Walla trip – I may press on and see if I can hit yet another goal with two zeroes.

The personal goal is far more important and when met will be far more rewarding.  At the end of last year I learned that my daughter and son-in-law are expecting their first child in late March.  All are healthy and everything looks good.  I have hoped for a grandchild for many years.  It is going to happen in 2018.  My goal is simply to hold him in my arms…