When I first thought about a November birding trip to California my main objective was to finally see a California Condor in the wild.  Shame on me for not having done so earlier.  It was about time.  I started putting together some details and figured that with luck and perseverance there was a reasonable chance of adding five new ABA Life birds.  I would still fall short of my goal to reach 700 but I would be a lot closer and that would then be an easy goal for 2018.  Then some very rare and special birds started showing up and if they somehow remained, maybe 700 was a possibility.

Two of the rarities that appeared were boobies – a rare Red Footed Booby at Pillar Point in San Mateo County and an even rarer Nazca Booby at Dana Point in Orange County.   I had seen 55 Red Footed Boobies at Kilauea Point in Kauai but never in what I consider the “true” ABA area which for me does not include the Hawaiian Islands.  Maybe it would have been possible to see a Nazca Booby on my trip to Peru, but I had not done so.  It has been seen only a handful of times in California – definitely not on my ABA list.  I did not know of either observation when I made my flight reservations.  I planned to go first to San Jose and then head south – get a photo of a Yellow Billed Magpie and then continue to Pinnacles National Monument to look for the Condor.  The Nazca Booby was seen on November 27, two days before my scheduled departure.  When I saw the record I looked into changing my departure date and arrival spot but it was prohibitively expensive.  If somehow it remained until I arrived on the 29th maybe I could consider a Plan B.  It did not – being only a one day wonder so just as well I had not made the change.

But the Red Footed Booby had been seen regularly at Pillar Point since November 12th.  No guaranty it would remain until I got there but the odds were good enough for me to change plans and divert first to Pillar Point when I first arrived.  Hawaii is now within the ABA Area but as I said I don’t count those birds.  This would be a great addition and if seen and if I could get some of the other rarities that had shown up since my first planning, 700 was a possibility.

My flight left Seattle at 6:00 a.m. which meant getting up at 3:00 a.m. and thus not much sleep – a recurring theme during my California trip.  No way to know if the Booby would remain but the best odds were to get to Pillar Point as soon as I could and hope – especially hope to see another birder with a scope on the bird.  The plane got to the gate in San Jose at 8:00 a.m. and since I had not checked any bags, the San Jose airport is pretty manageable and the process at Fox Car Rentals was very efficient, I was miraculously on the road by 8:20.  Although Pillar Point was only about 50 miles away, it was now rush hour and traffic was pretty bad for a good part of the trip.  Somehow I made it to the marina around 9:45 a.m. – and my heart sank.  The area was much larger than I had expected and it was not at all clear where to look for the bird.  There had been a reference in one report to Johnson Pier.  I located it – drove to a viewing point and began scanning.  Nothing.  For the next hour I moved to various points to check the many breakwaters.  I saw no other birders and definitely no Red Footed Booby.  I considered admitting defeat and returning to my original plan and decided to try one more spot – going to the boat launch area to scan yet another breakwater from yet another perspective.

I missed it on my first two scans because its head was tucked down, but on my third pass I saw the distinctive bill shape of a booby and knew I had my bird.  At first it was flanked by a Brown Pelican and a Western Gull – giving a good size comparison.  The Pelican flew off and my photo – very distant – at least could show the bill, the size compared to the gull and some of the coloration of a juvenile Red Footed Booby. It was not yet 5 hours after I had left Seattle and I had my first prize.  ABA Bird #694.  An excellent start.  Interestingly no other observations for this rare bird were posted to Ebird for the day I was there although it has been reported almost every day since.

It was now back to the originally planned itinerary but with a much delayed start.  I headed back towards San Jose and then continued on to Coyote, CA on Highway 101 about 60 miles away.  This was an agricultural area that my research said was very good for Yellow Billed Magpies.  I had seen my only Yellow Billed Magpie 46 years earlier not long after I started birding.  It is found only in the Central Valleys of California.  I wanted/needed a photo.  It took a little longer to find one than expected but soon after finding my first one, I found several more.  Especially in flight and even moreso than its Black Billed Magpie cousin which is very common in Eastern Washington, it is a very striking bird.

A bonus was that I also found a White Tailed Kite in the same area.  I have seen many in California before and also several in Washington, but this was my first one for the year – so a new ABA Year bird.

The original plan was that I would have been in this area and seen the Magpie by not later than 10:00 a.m. and then gone to Pinnacles to look for a Condor.  No complaints, but because of the pursuit of the Red Footed Booby, it was now almost 1:30 p.m.   I could get to Pinnacles before 3:00 but I wasn’t sure exactly where I might find a Condor once I got to the area or how long that might take and when the light would make sightings and especially photos more difficult.  Another option I had considered was going to the Gloria Road area where two of my other target birds were possible – Bell’s Sparrow and Lawrence’s Goldfinch.  I decided to go that route and then to try for Condors at Julia Pfeiffer Burns State Park the next day – arriving early both to give myself more time and hopefully to catch the birds as they were leaving their roosts and beginning their scavenging forays.

It was almost 70 miles to my next area, but one of the best parts of this trip was that at least out of the cities, travel was fast.  I made good time and began my search around 2:30 and spent the next hour plus on pretty remote roads through varying habitat.  Around 3:30. I found a pair of Bell’s Sparrows in sage/chaparral on a hillside on Gloria Road.  It was not on the sunny side of the road and the light was not great.  I had been trying playback off and on for more than 5 miles of seemingly appropriate habitat.  These two birds flew in in response but immediately buried themselves in the dense vegetation and would not come out.  My only views were impeded by the thick branches. Nonetheless in a series of views, I could make out the dark head, white throat, white eye ring, dark malar stripe and little if any streaking on the back, sufficient in this habitat and location to give good confidence to identification as the Bell’s Sparrow as opposed to the Sagebrush Sparrow.  I counted it as a new ABA Life bird but was very frustrated to not get a photo.  The one below is from the internet. 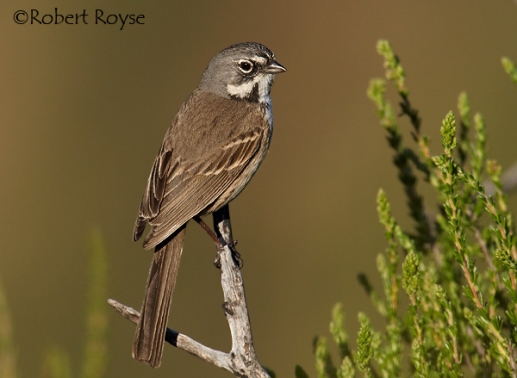 Time to call it a day.  I headed to Monterey to spend the night at a good spot to get an early start for the Condor search the next day.  I was high from the successes of the day but very tired from the early start and lack of sleep the night before.  It had been an excellent day in excellent weather.

One thought on “California Birding Day 1 – Starting with a Booby”