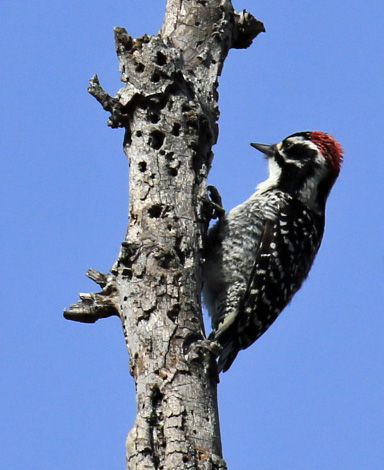 Before any birding trip, I do as much homework as I can relying largely on Ebird and my own library to plan where to go and to compile target lists of what I hope to see.  I focus on new life birds and birds that I have not photographed before.  The trip to Anza Borrego described in my previous blog post was not likely to produce any of the former but had been pretty successful for the latter – adding six new “life photos”.  The following day we visited the super fabulous San Diego Zoo.  Most of the birds there were in aviaries and I will write about that in a supplemental post that will be about the Zoo – its birds and its mammals.  My homework had identified a couple of spots relatively close to where we were staying that might produce a lifer or two and would also provide some photo ops.

The first such place was the La Jolla Cove.  After a brief rest from the full day at the Zoo, we headed to La Jolla to visit the Cove, to watch a sunset and hopefully to find a Black Vented Shearwater.  They are often seen from the Cove and the adjoining beach viewpoints and I was hopeful to add this southern shearwater to my life list.  We arrived in decent light and we were not alone – hundreds of tourists and locals enjoying the beautiful scenery, the great weather and some pretty cool birds.  Unfortunately those birds did not include my targeted shearwater.  I did not have a scope and there were no other birders present who did.  Maybe that would have made a difference with an ocean scan past the limit of my binoculars.  Hundreds of gulls – Western and Heerman’s – lots of cormorants and pelicans – but no tubenoses of any kind. As I often write, however, there were wonderful consolation prizes – fantastic up close views of nesting Brandt’s Cormorants in their spectacular breeding colors and beautiful roosting Heerman’s Gulls.

They were so commonplace that I forgot to take a photo, but the Western Gulls really were beautiful.  Unlike in our northern waters in Washington, here the Western Gull is dominant and does not hybridize with the far less common Glaucous Winged Gull.  Their mantles are very dark and their heads very white and they are everywhere.

Just south of the Cove were many pullouts looking west over the Pacific and one was perfect for the beautiful sunset.

Sunset over the Pacific at La Jolla 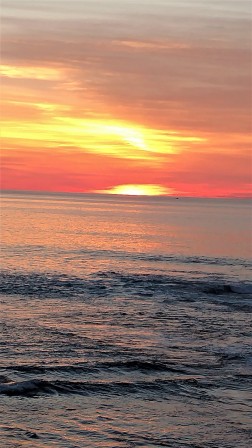 The next day was to be our last and we went separate ways for part of it as I headed off to Tecolote Canyon Natural Area.  I had found this spot in my Ebird research and recent birdlists there had included a number of photo targets and a seemingly good chance to add the Scaly Breasted Munia to my life listed.  Also known as the Nutmeg Mannikin, a bird of Asia, it is an “exotic” – one of many in Southern California – that had been introduced to the area in the 1980’s and has seen its population expand to the point where the American Birding Association (ABA) added it to its recognized North America list.  Although I had already seen and photographed most of the targets that were also potentially to be found at Tecolote, there was another non-lifer but new photo op that I really wanted to find there – Nuttall’s Woodpecker.

Very friendly employees at the Visitor Center confirmed that Munias were often seen and gave some suggestions on where to look for the Woodpecker and some other good birds.  I had expected to spend maybe an hour there and to not have to wander too far from the entrance.  Such was not the case, however.  There were birds but pretty scattered and not so cooperative – especially the two I most wanted.  The place was overrun with Yellow Rumped Warblers and I got tired of seeing something fly into a tree or bush and have it be yet another of these butterbutts.  I ended up spending more than 2 hours walking almost 4 miles.  But once again the weather was spectacular and rewards were available.  The first was a great look at California Towhees feeding on the ground.  I saw more than 10 during my visit.

Also pretty close to the entrance I found a singing California Thrasher – one of five seen that morning.  A very pretty and cooperative fellow and just like the ones seen at Anza Borrego, it did not move off its territorial post. 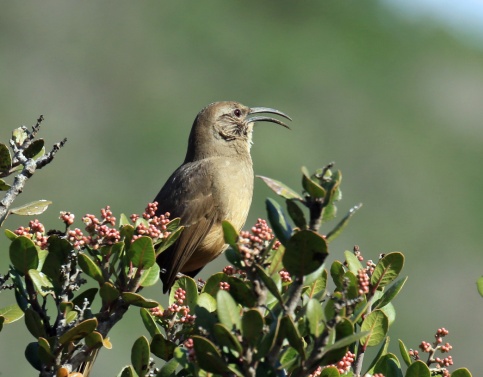 There were also numerous California Scrubjays, House Finches, Northern Mockingbirds and hummingbirds.  I worked hard to find, confirm and photograph an Allen’s Hummingbird.  Most of the hummers were Anna’s (more than a dozen) but I got very good looks at one that at first was visiting a feeder across the channel and then flew to a branch near me.  I was pretty sure from the start that it was an Allen’s – and felt really good about the ID (even without a picture of the tail feathers) when I listened to its frequently repeated chip notes.

I got excited when I saw a Kingbird first perched and then flycatching.  I had forgotten that Cassin’s Kingbirds are pretty common at this location in the winter but was still pleased to get the photo.  I was not able to get a photo of two White Throated Swifts that I saw zooming overhead when I first spotted the Kingbird in a higher tree.  I later found three more Kingbirds throughout the area. 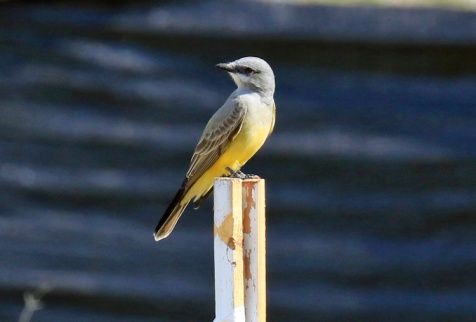 I had now passed the Sycamore tree that was described as a likely spot for my woodpecker.  No woodpeckers at all were seen or heard and I admit to having felt pretty disappointed thinking one would be guaranteed at this location. I played my Nuttall’s recording and got a response and movement in a shrub – not a likely spot for a Woodpecker – and the trill was vaguely familiar.  It was a Wrentit – my second really good look on this trip and another good photo.  A second one trilled from across the path as well. 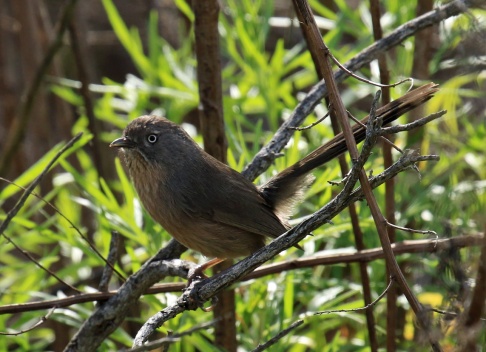 As I changed my gaze to the second Wrentit, a quick movement off the ground and into the brush and then down into the ravine caught my eye.  The brown back, small size and heavy finch bill signaled a possible Munia.  I desperately tried for a clear view and hoped it would come into the open.  The foliage and angle were bad for a photo so I kept watching with my binoculars only.  A partial view through the brush finally revealed the tell tale scaly breast of the Scaly Breasted Munia but no amount of pishing, playback or praying over the next 15 minutes got the bird into the open.  I had a lifer but no photo – so I had mixed feelings at best. 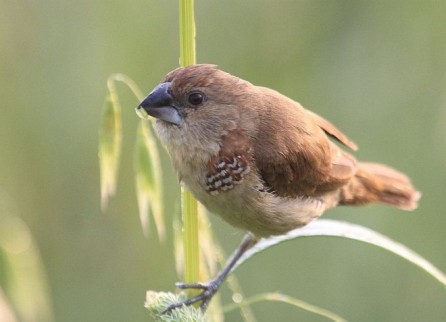 Another feeling was that now I HAD to find a Nuttall’s Woodpecker.  I continued on for another half mile+ and had NO drumming, rattles or visuals.  After maybe a dozen attempts at playback I finally heard a rattle response in a thicket up ahead.  I looked and looked but could not find the woodpecker – that is until I noticed it at the top of a hole ridden snag and saw the bird with only the very top of its head visible.  Its entire body and most of its head was directly behind the snag – completely immobile and hard to see.  I grabbed a shot and then waited – and to my surprise a second bird flew in and this got the first to move and now I had my photo opportunity – in good light and out in the open. 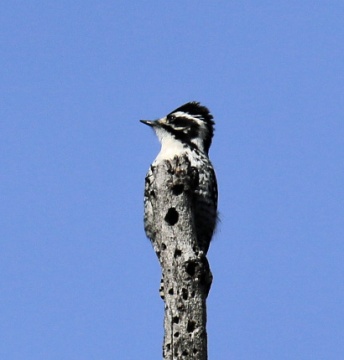 Somewhat assuaging the disappointment over the photo-less Munia, the Nuttall’s Woodpecker photo meant I could head back – hoping for another Munia and maybe a Gnatcatcher or something else fun.  Yellow Rumped Warblers continued their distracting flights and then one led me to a small group of Goldfinches, some American and some Lesser that I tried unsuccessfully to make into Lawrence’s Goldfinches.

I turned my concentration to a search for gnatcatchers.  I heard some promising squeaks and saw some movement in some brush ahead.  There were four birds, a Bewick’s Wren and three Gnatcatchers – unfortunately once again all the Gnatcatchers were Blue Gray. My quest for either a Black Tailed or California would have to wait for another day. 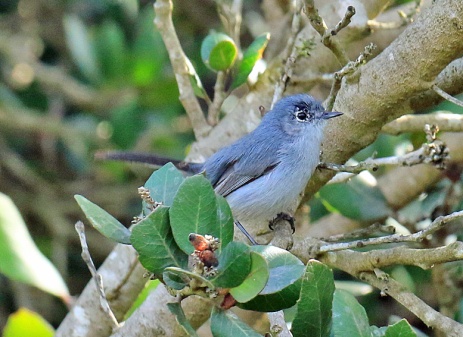 There were more warblers, House Finches and a Black Phoebe on the way in but no more Munias.  I had seen 28 species and was especially happy with the Nuttall’s Woodpecker.  Had I not seen and photographed some of the other species elsewhere, it would have been an exceptional day for specialties.

I had just enough time for a mad dash to the Tijuana Slough hoping for a picture of a Ridgway’s Rail.  It was very light on birds, a Little Blue Heron, Snowy Egrets, a Say’s Phoebe and Whimbrels and Willets being the best seen.  I heard at least one rail but I could not coax it out into the open – another photo missed. I include a few photos to memorialize this part of my  trip. 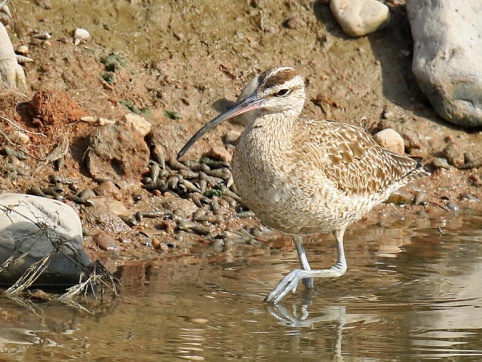 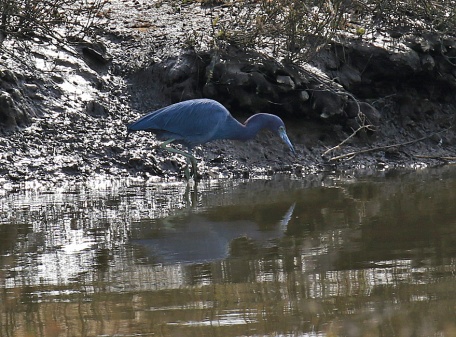 All told this California visit resulted in 70 species seen.  I added one life bird and 8 life photos.  I had many other great photos and lots of fun at beautiful places.  Lynette enjoyed her birding and may be willing to try some more.  Ebird says that California has been the state where I first saw 157 life birds.  Of those I only saw 33 on this trip, so if this trip had been back in the early days subtracting them from the 70 observed means I would have added another 37 life birds here.  40 Years of birding elsewhere means that those birds were first seen elsewhere – probably many elsewheres for quite a few. It would have been really nice to have seen a Black Vented Shearwater but I doubt any photo would have been available and there are a number of other pelagic species I “need”.  Maybe that will be my next California visit – join the legendary Debi Shearwater for one of her excursions.  I look forward to that.