I am not a county lister although I have lists for counties where I have birded – thanks to Ebird.  Ann Marie Wood and Steve Pink are definitely county birders and the opportunity to see a Burrowing Owl that had been reported at American Camp on San Juan Island was a major draw from them.  Any owl is special and I had not birded in San Juan County for a long while, so I was happy to join them to look for the Burrowing Owl.

We had good weather and good directions and headed directly to Pickett Lane where the bird had been reported.  At least we thought we had good directions, but when we spoke to the couple that had last reported the owl, we got conflicting details from each of them, so we were not so sure.  As we arrived at the first most likely spot, in the field off to the east, we saw dozens of the rabbits for which San Juan Island is well known and which provided the burrows that probably attracted this very out of place owl.  But our information was that the Burrowing Owl was in the field to the west and although we saw no rabbits there, we did see two foxes, one red and one black, another species for which the Island was known.  We worried that the owl could have been a meal for one of them or at least that their presence may have caused it to bury itself deep in a burrow.

One of Many Rabbits 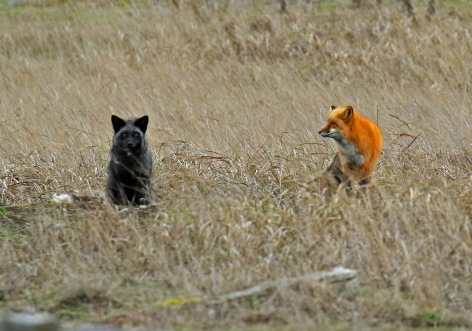 We spent almost an hour looking at the grassy fields which seemed to correlate to the directions we had received – but we could not find an owl.  We went to the end of the road where it provided a great view of the water and watched for whatever we could find.  There were many loons, grebes, sea ducks including a single Long Tailed Duck, but the highlight was undoubtedly the small groups of Ancient Murrelets that flew by.

We returned to the fields where we hoped to find the Burrowing Owl.  Another birder had been there for some time and she too could not find the bird.  Then another car with two birders arrived and they finally found the owl and helped us get onto it as well.  It was barely visible in the clumps of grass, but unmistakable.  Steve and Ann Marie had another species for the county – so did I but that wasn’t saying much since at the start of the day, my list for San Juan County was a pathetic 28 species.

Time to move on and see what else we could find and enjoy the spectacular scenery that waited around every bend as is evidenced by the two photos below. 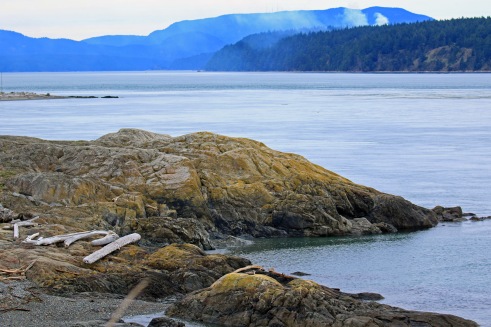 Land birds were few and far between and nothing exciting.  We found good waterfowl at many stops including one spot with 50+ Pacific Loons and continuing Ancient Murrelet groups.  Three Harlequin Ducks were nice additions at one overlook. 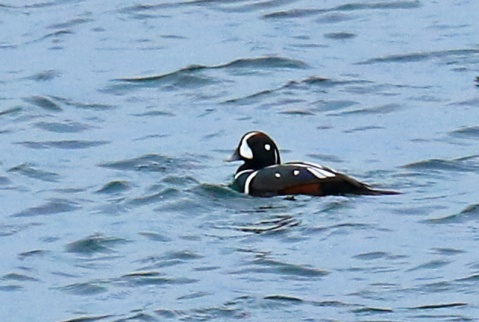 At one spot we saw a gorgeous Red Fox on a pullout off the road.  As we approached not only did it not run off, it actually came closer to us – as if it was looking for a handout.  This provided the opportunity to take close up photos – some of my best ever. 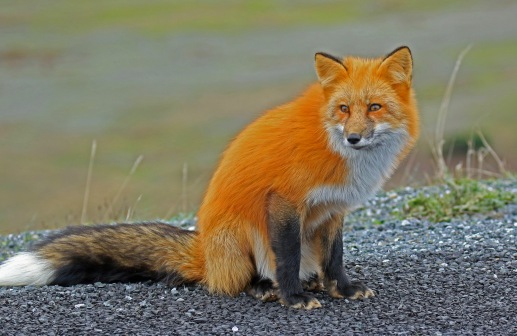 We surveyed a number of salt water lookouts and many fresh water ponds and lakes.  Not a great diversity but at the end of the day we had something over 65 species.  There were a number of Trumpeter Swans on various ponds.  Again nice photo ops.

We searched hard for a Canvasback that would have been a new San Juan County bird for Ann Marie and Steve, but just could not find it at Sportsmen’s Pond where it had been reported.  One stop provided a non-birding photo that I am calling “The Old Man in the Woods” – a very gnarly tree trunk with lots of character.

The Old Man in the Woods

With a fairly late start (took the 8:15 ferry from Anacortes) and darkness by 4:30, there was not a lot of birding time.  The Burrowing Owl had been found and was terrific but to me it was the foxes that were the highlight.