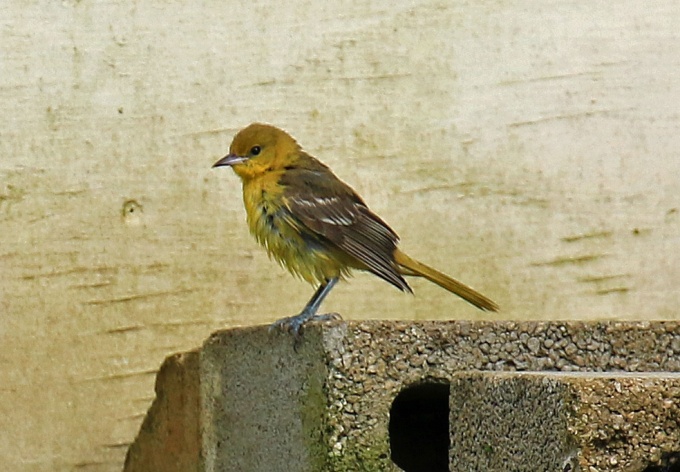 Football fans are very familiar with it – those last two minutes of the game when no matter what has happened in the preceding 58 minutes, these minutes can make all the difference.  Something changes.  Maybe it’s the focus.  Maybe it is the intensity.  Often it seems to be the approach. Whatever it is, those last two minutes can seem like an eternity or they can just fly by.  Lots of excitement can be crammed into those two minutes.  Maybe the entirety of the rest of the time had been boring and inconsequential.  Without something big in those last two minutes, the fans will go home disappointed and the players will wonder what they might have done earlier to have changed the outcome of the day – to make it a win – a success – instead of a loss – a failure.

It was 1:35 P.M. on Sunday November 6th.  We had spent the past 6 hours traveling yet again to Neah Bay and once there, joining with others in the effort, we had scoured every bramble, bush and tree within 1/8 mile of the area where the Prothonotary Warbler had been seen and photographed the day before.  An extraordinary bird with only two other records in Washington – EVER.  It had been found by Mike Resch, a birder from Massachusetts on his own crazy quest – adding some new birds to his Washington list so he could add yet another state to his long list of states where over his life, he had seen at least one-half of the species that had been reported for that state.  He was familiar with this bird from his past and when he called me on Saturday morning, it just did not seem fair that some outsider had found this bird in my state.  But why not, an outsider finding an outsider bird.  How cool!  If I had not had commitments for that day I would have raced off to the ferry and made the trek.  Those plans were too important, so I deferred until the next day and contacted others so that Ann Marie Wood, Steve Pink and Brian Pendleton were the explorers leaving Sunday morning.

Our search for the warbler was futile – no sound, no glimpse, no record.  Disappointed of course, but we had hopes for a consolation prize and our attention had turned to other birds and other areas.  We all wanted first and foremost to find an Orchard Oriole – a rare bird for Washington that had eluded Brian and me on our earlier visits; and Steve and Ann Marie had not been to Neah Bay since it had first been seen and thus wanted it as well.  Steve and Ann Marie were also hopeful of finding a Tropical Kingbird, or a Palm Warbler or a Blue Gray Gnatcatcher, all of which are really good and uncommon birds which Brian and I had seen on our Neah Bay visit earlier in the week.

As of 1:35, we had frankly not seen very much.  Not only no Prothonotary Warbler – no warbler at all and not much of anything else of note.  Probably the Northern Fulmars seen off shore and numerous Black Oystercatchers on the rocks being the best birds.  We had none of the consolation birds and we wondered if the long trip was going to go unrewarded.  We were pretty low.  And “low” turned out to be the correct word in another way.  Somehow from the back of the car, Ann Marie had seen something that looked – different. “What is that there low on the ground?” she asked.  We got on the bird quickly and Eureka!!  Ann Marie had spied the Orchard Oriole.  It had been seen earlier in the day in this area (Lincoln and 3rd) but until that moment we had missed it.  We had been told it was very active and so it was.  We got out of the car.  I snapped a couple of photos and we followed it as it flew from building to building, yard to yard, branch to branch for two blocks.

And now there was more.  A Tropical Kingbird flew onto a wire just above us as we were watching the Oriole.  A second consolation prize – just seconds after the first.  Wow! Another photo.  Our spirits were definitely improved.  But there was more to come.  The Orchard Oriole had brought us to the location where the Harris’s Sparrow had been seen earlier in the week.  We had been there before and seen nothing, but Steve noticed that there were now a number of Golden Crowned Sparrows on the ground and in the bushes so we searched for the Harris’s Sparrow. 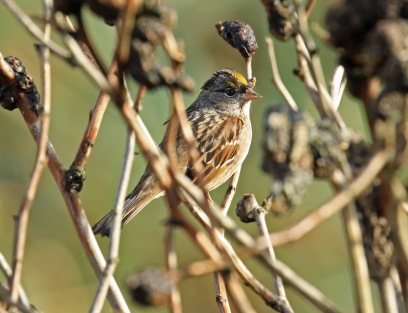 No go but in a bramble behind the building, I saw a small grayish bird flit about.  I was able to get a good view and screamed out that we had a Blue Gray Gnatcatcher.  Brian and I had had one six days earlier in the area by the Seawatch where the Prothonotary had been found.  John Gatchet had one or possibly two there earlier in the day.  This was almost a mile away.  There had to be more than one in Neah Bay.  It flitted about but gave us super looks including one as it perched on a red railing with more red in the background making for a cool photo. 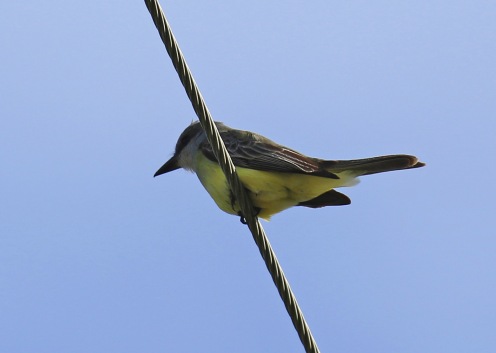 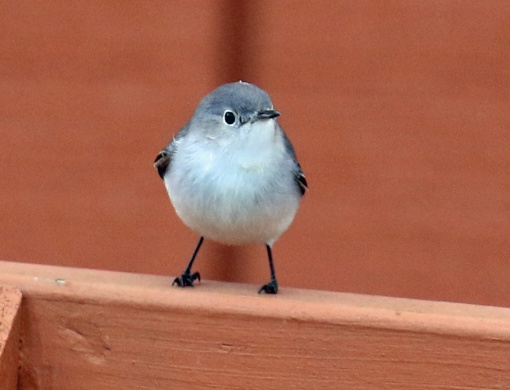 In just under two minutes, we had gone from nothing exciting to three really good birds; this was a rally of note.  And just as the two minute clock was running out, we had another big play.  Steve asked “What’s this?” as a little bird flew in on the ground next to the sparrows just as the Gnatcatcher flew off.  It was a Palm Warbler.  It fed on the ground, flew briefly up onto the building where Brian and I had seen the Harris’s Sparrow on Monday; posed briefly, and then returned to the ground for a few more looks before disappearing.  This had been a memorable two minutes.  We agreed that it had been the most exciting and surprise-packed two minutes we had every had in our many, many years of birding.

We felt like we had now definitely won the game.  High fives all around.  This had been one heck of a two minute drill.  We would have traded all of it for a single Prothonotary Warbler but not for much else.  And now we were re-energized and went off looking for more.  This took us to the bay itself, west of the Warmhouse restaurant and near the creek outfall where there were gulls to scan.  Something really rarer would be great, but the main hope was for a Black Legged Kittiwake – new for the year for Ann Marie and Steve.  We had Black Oystercatchers and some Dunlin, lots of ducks, loons and grebes in the water and dozens of gulls in close.

Fairly quickly, Steve found the hoped for Black Legged Kittiwake on a rock maybe 50 yards out.  We had great light and great looks.

With that success, we turned to sorting through the remaining gulls.  Most were pretty close and in good light, and we felt pretty confident concluding that we were watching the following gull species:  California Gull, Glaucous Winged Gull, Herring Gull, Heerman’s Gull, Western Gull, Mew Gull, and Thayer’s Gull.  Nothing really rare but together with the Kittiwake, we thus had 8 gull species close up for great comparisons.  Some photos: 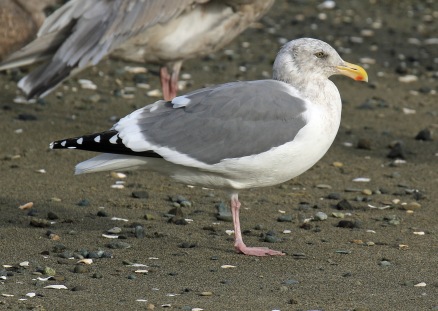 The Black Legged Kittiwake had disappeared and then just as we were about to leave, it returned.  At first it had been the bird that was furthest out.  Now it was the closest and we all got great parting photos.  Now if only somehow the bird that had returned had red legs instead of black.  Maybe someday… 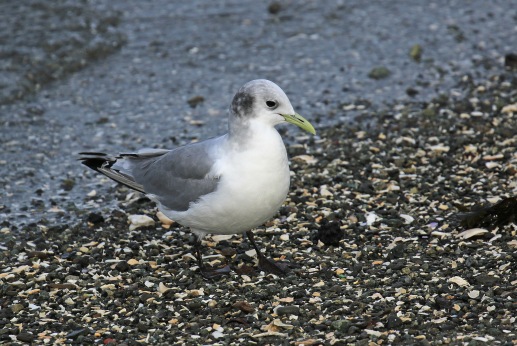 We made one more try for the Prothonotary Warbler – again a no show.  But with our memorable Two Minute Drill behind us and to be always remembered we considered it a miss and not a failure.  Another great day in Neah Bay.

3 thoughts on “The Two Minute Drill”