With a lot of new birds and new photos from the great pelagic trip on August 28 (see  my earlier Magical Pelagical post), I had met my “goals” for the year and that compulsive urge to go chase every new bird was gone.  Sure I would still go for new state life birds or photos and there were some specific species I definitely wanted to see – yes, I mean you Boreal Owl – and some trips I wanted to make – but I no longer felt the need to go for everything.  I had done that for the past three years and it had been great and successful, but no more.

So yesterday when Russ Koppendreyer posted on Tweeters that he was looking at a Ruff that Jeanelle Richardson had found earlier that morning at Three Crabs in Sequim, I was tempted; but even though a Ruff is a wonderful rare bird and one I really enjoy – nope – no need to rush out to see it.  I set about on another bird project and that was that.  Until…a couple hours later,  I checked email and found that Russ also had a Sharp Tailed Sandpiper at the same location.  That is a favorite shorebird and also quite rare so now the ante had been raised significantly.  Let’s see…it was now 1:20 pm.  The next Edmonds/Kingston ferry was at 1:40 and I was in shorts, T-Shirt and sandals and had not eaten lunch.  I asked myself if I really “needed” these terrific birds and the answer was “no”.  But when I rephrased the question to self as whether I wanted the adventure of a possible mad dash with a potentially great prize, the answer was “hey this could be fun – why not”.  I live less than 10 minutes from the Edmonds Ferry terminal so I put the SD card back in the camera, checked that the battery was okay, grabbed another layer and a protein shake and took off.

It helped that the weather was spectacular – 72 degrees and sunny.  It did not help that apparently a lot of other people were heading off in the great weather and when I got to the ferry toll booth there was a line.  It was now 1:35 and I wondered if I was going to make the ferry.  If not, I was going to abort and head home.  The ticket seller said she thought I would “probably” get on but “no guarantee”.  I bought the ticket and moved forward.  As the cars loaded on ahead of me, I saw that they had stopped letting more cars into the waiting area.  It was looking “iffy”.  I won’t dwell on the agony of suspense – the happy ending was that I was the next to next to last car to board the ferry – so I was on my way.  And details like this add to the adventure and the story.

Room for Me on the Ferry

Waiting for the ferry to decide to let me on or not, I had spoken to Russ and was encouraged that the birds would likely stay regardless of tide and that they could be seen well enough for some photos.  Three Crabs has been a great spot for years – even back to when there was actually a restaurant named “Three Crabs” at the spot.  There is a wetlands “restoration” project underway at the location – yet another project to help salmon but not necessarily good for shorebirds, so I hope it will continue as a birding hotspot.  Traffic was good and I arrived at Three Crabs around 3:30 somewhat expecting to see a long line of birders with scopes trained on one or both of the special shorebirds.  But there was only a single parked car with two people looking out at the wetland.   Hmmm???

At the northern most part of the area (east of the road and south of the former Three Crabs site) there was a series of pools with a number of shorebirds walking about feeding.  They were small peeps – a mix of Western and Least Sandpipers but then another bird flew in – a little larger and my heart rate went up as I thought it could be the Sharp Tailed Sandpiper.  But no – only one of the three or four Pectoral Sandpipers that were around.

Now that I noticed that the couple in the parked car had a pair of binoculars and a camera, I went over and learned that they had been there earlier, seen both rarities and had now returned after lunch.  Beginning birders, they were excited by what they had seen before and were hoping for better looks, but had not seen either species since they had returned.  Now a Ruff is a good sized shorebird – not quite as big as a Greater Yellowlegs, but hard to miss – unless of course it is buried in or behind some tall grass and there was plenty of that around.  I walked further south when I saw a head above some of that grass.  It turned out to be a distant Greater Yellowlegs, but I also got a fleeting glimpse of a browner large shorebird that I was pretty sure was the Ruff.  It disappeared behind even taller grass so I waited 5 minutes without another view and then decided to return to the earlier area and look for the Sharp Tailed.

Now there were at least two Pectoral Sandpipers – or maybe three – or maybe that third bird was the Sharp Tailed – as the demarcation on the chest appeared at least less distinct and the cap a more solid reddish.  Then it flew off and I could see it was definitely the Sharp Tailed but now distant and hidden.  The couple from the car had now gotten out – interested in my focus on the birds I was watching – and we were joined by another birder – a local (I will not include the name for her privacy) who while not hard core was also way beyond mere beginner and she was very interested when she learned of the prize birds.  I said I thought we had a good chance of finding the Ruff in the area where I thought I had seen it earlier so the whole gang moved south and we were immediately rewarded as the Ruff had returned to the little pool with now three Greater Yellowlegs and off and on it would come out into the open.  I snapped a few OK pictures and was happy that all of us had gotten acceptable views.

A few more cars came by and stopped to ask what we were looking at.  Most had no interest in birds but still thought it cool that some rare birds had chosen their neighborhood for a show.  One car had some more beginning birders and they joined our party.  Another car had parked up at the north end and two people were busy studying the shorebirds there.  After getting our newly added birders (who had no idea what a Ruff even was) onto to the Ruff, we moved to the north again.  I told the two folks in the car there about the Ruff and Sharp Tailed Sandpiper.  Their only bird book was of Puget Sound Birds and neither species was in that guide.  What was very cool, however, was that the day before they had birded this same spot and found a bird they could not identify.  Their excellent notes clearly indicated that they had seen a Ruff.  When I showed them my photo they immediately said – “that’s it”.  Now they would get to see it again. 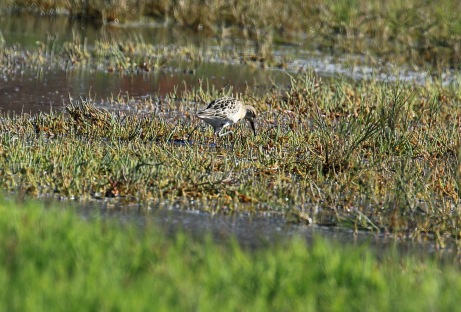 For the next 30 minutes or so, we continued to watch for the Sharp Tailed Sandpiper and hoped the Ruff would come closer (as apparently it had been closer to the road in the morning).  Jason Vasallo joined us – still pumped from seeing his first Broad Winged Hawk out at Neah Bay with the Waggoners.  We immediately got him on the Ruff and that made new state bird number 2 for the day.  Now there were more eyes looking for the Sharp Tailed Sandpiper – always a good thing.  There were a couple of Wilson’s Snipe in the field – and good scope views made it easy for all to see and learn the fieldmarks with the heavily striped back and head and the long bill.  We also studied a Pectoral Sandpiper and focused on the difference between it with a clearly demarcated breast streaking and broken streaks on the head compared to the solid cap and more of a wash on the breast of the Sharp Tailed.

The Pectoral study paid off as the Sharp Tailed was spotted directly in front of a clump of grass about 30-40 yards out in the field.  Not a close look but with the scope all of the fieldmarks clearly seen and everyone got on the bird.  And Jason had new state bird number three!! 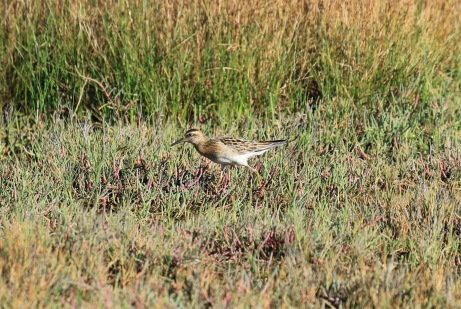 Had the day ended there, everyone would have been happy.  But if happy is good, then thrilled and ecstatic is even better and that is what we got.  We never heard the signal, but there must have been one.  Don’t know why, but BOTH the Ruff and the Sharp Tailed Sandpiper decided to put on a real show and they kept getting closer and closer eventually coming within perhaps 30 feet of the crowd now watching intently with oohs and aahs from the road – with the sun directly behind us and directly on both birds.  At times both species could be seen within feet of each other and at another time the Sharp Tailed was within feet of the Pectoral Sandpiper – giving great comparison views.

Ruff – Up Close and Personal It simply does not get any better than this.  Very great birds, beautiful weather, perfect positioning and sun for photos, very cool people and a beautiful place.  It had been a mad dash and it had worked – and then some.  Time to leave and when you can end the day with a view of Mount Rainier over Puget Sound from the Kingston Ferry Terminal as the sun sets – just an awesome day.  I think I will continue to be a birder!!!

One thought on “A Mad but Definitely Not Maddening Dash”