Neah Bay has become a “must include” stop in any Washington birder’s plans for the year.  In addition to just being a great place to find many good birds, it is a place where rarities are often found.  And if you can visit in good weather, it is extremely beautiful and peaceful.  There is always the chance for something special and there is usually the likelihood that you will find other birders there – hopefully with their cameras, scopes or binoculars already looking at something wonderful that they will share with you.

An Olympic Peninsula Audubon Society joint field trip with the Washington Ornithological Society – part of which was to include a hawk watch on Bahokas Peak – provided a perfect reason to return to Neah Bay (many trips a year are highly recommended) and an opportunity to give my friend Linda insight into my crazy birding life.  It was to be a two day trip with stops in Sequim and Port Angeles – the latter with hopes that the Yellow Billed Loon would still be near the City Pier.  The weather was great but the bad news was that the timing coincided with a one day halibut season that meant that many slow moving boats were heading to Sekiu and Neah Bay and that most of the hotels in the area were already booked.

I was keen to stay at Hobuck Beach but those cabins were long since booked and in fact I could not find any rooms in Neah Bay or Sekiu at all.  I got on the waiting list at the Hobuck Beach resort and took a room at Port Angeles which would have required a very early departure to meet Denny Van Horn, the trip leader in Neah Bay at 9 the next morning.  The day before the departure I received a call with news that a cancelation meant a cabin was open at Hobuck and I jumped at the chance.

Ebird reported that a Pectoral Sandpiper was being seen at the pond at Hogback Road in Sequim and that was our first stop.  The pond is a VERY flooded field in a private residential area downhill from the road itself.  I had never visited it before or known about it.  There were lots of birds and even through the scope I could see what appeared to be a Pectoral Sandpiper – larger than the many peeps but smaller than the Dowitchers that were spread around the pond – and with pale legs.  Signs were clear that the road was private, but when a resident of the development visited with us and said it would be fine for us to move down to be close to the birds, we took that as a go and went down.  We saw another couple on the way down and confirmed with them that it was ok and moved closer.  I say all of this because I have since learned that there have been some less than good interactions between residents and birders and the Sequim birding community stresses birding from the upper road only.

The Pond really was a treasure trove with Least and Western Sandpipers, Greater and Lesser Yellowlegs, Long Billed Dowitchers, a calling Sora, baby Killdeer Fuzzballs, a single Wilson’s Snipe and of course the Pectoral Sandpiper.  Unexpected bonus birds were a pair of Blue Winged Teal and my FOY Greater White Fronted Goose. It was a good way for Linda to get a taste of birding. 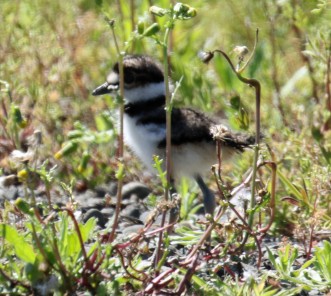 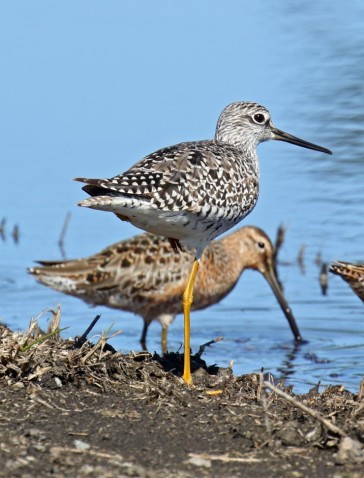 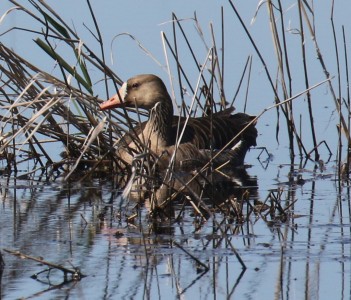 Linda is a residential home builder with a strong interest in projects that enhance community.  We drove around Sequim observing opportunities and instances of both good and not-so-good development.  We then headed off to Port Angeles where we did find the continuing Yellow Billed Loon just off the City Pier.  Remembering how difficult it has often been for me to find this species in years past and that I only finally got a picture of it on the boat trip I arranged out of John Wayne Marina last December 31st, it seemed hardly fair that Linda would get to see one up close on her first birding trip.

After lunch we continued on the tortuous curvy boat stalled drive to Neah Bay with a few scenic stops along the way but without looking for any birds.  In Neah Bay itself we scanned the marina finding only common birds and then headed off to Cape Flattery, a beautiful and favorite spot, and one that Linda had not seen.  The weather remained perfect and the hike out to the viewing platform was beautiful.  I had hoped there might be some Tufted Puffins playing in the surf when we arrived, but such was not the case and we settled for the gorgeous scenery and some of the very striking Black Oystercatchers that are regularly seen on the rocks below.

Although we would be going back the next day, I also wanted to head up to Bahokas Peak on our own.  Not only is the scenery from some of the viewpoints spectacular, there is also the chance for Sooty or Ruffed Grouse.  Unfortunately others also drove the remote road while we were there making it highly unlikely that grouse would be on the road.  But the scenery was spectacular with views both south and west of Hobuck Beach and the coves and beaches to the south and also north and east of the Neah Bay Marina and the straits.

View to the South and West from Bahokas Peak

We found many Wilson’s Warblers and a few other birds including some views of soaring American Bald Eagles (we had already seen many) but it was generally pretty quiet and definitely no grouse.

Time to get to Hobuck Beach to check in and then to walk the beautiful beach itself.  A few peeps were on the beach and is generally the case, there were many gulls especially up near the mouth of the Waatch River.  Mostly Glaucous Winged and “Olympic” Gulls (Glaucous Winged/Western Hybrids) but there were also some Herring and Thayer’s Gulls – both new for the year.

Time to head into town for dinner.  There are not a lot of options in town but food has always been good at the Warm House and we were hopeful of some Halibut since the fishing had begun.  Unfortunately they had sold out of their limited supply so we missed that favorite.  It was then back to Hobuck in time for a glorious sunset. 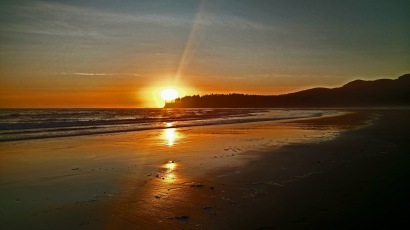 The official field trip was to start at 9:00 a.m. the next morning.  This gave me time to head back up to Bahokas Peak early to look for grouse before anyone else had driven the road to disturb them if they were out.  The strategy worked perfectly as I fairly quickly found a single Sooty Grouse gravelling on the road.  A little further along I also had many Band Tailed Pigeons also gravelling and then flying up into the trees. 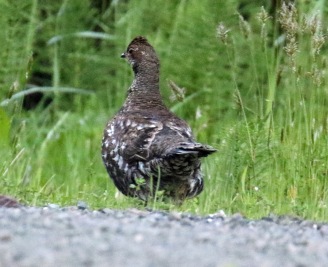 I later heard the “Quick Three Beers” call of an Olive Sided Flycatcher but I could not get it to respond and it remained in a treetop directly into the sun. I also heard and easily saw numerous Pacific Wrens and even more Wilson’s Warblers.  Time to go, pick up Linda and meet the group at the General Store.

Denny told us that he had relocated the White Winged Dove that had been seen at Butler’s Motel the previous month and that was going to be our first stop.  I had a very brief and frustrating view of it then without being able to get a photo so I hoped to make up for that miss.  Unfortunately just as had been the case earlier, there were MANY Eurasian Collared Doves in the trees and swampy area behind the motel, but no dove with white wings could be found.  Fortunately Nancy had kept her feeders stocked and many birds came in for the treat and gave us good views including Brown Headed Cowbird, Purple Finch, Black Headed Grosbeaks, American Goldfinches and a single Pine Siskin. 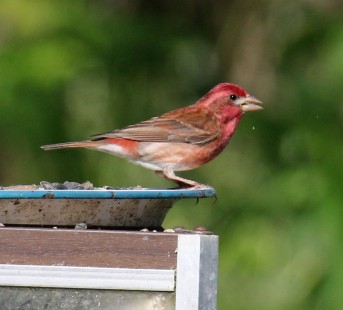 We gave the dove every chance to show off but it just did not happen so we headed over to the waterfront and checked the birds on the shoreline and out in the water.  We had a single Lesser Yellowlegs and a half dozen Long Billed Dowitchers mixed with many more Least and Western Sandpipers.  We found American Pipits, a Thayer’s Gull and a Purple Martin with other swallows.  Nothing to write home about but nice to see.  Now we were off to Bahokas Peak with the main objective being some hawk watching.

Bahokas is a great spot for viewing hawks in migration.  The previous weeks many hawks were seen in migration including a handful of Broad Winged Hawks – extremely rare in Washington. Maybe we were past the migration or maybe it was just bad timing that day, but there were very few raptors to be seen despite lengthy looking. After a lengthy time with not much to show for it, I made the executive decision to break ranks and head off on our own also recognizing that there would be a long ride back to Seattle while most of the others there were only going to Port Angeles or Sequim after the trip.

We went back to Hobuck Beach for more searching on the sand.  At one point I saw a couple of American Pipits among some debris and went closer for a photo.  Another group of pipits materialized and I got very excited when one seemed to have a reddish cast on its throat.  A Red Throated Pipit is an extreme rarity but one had been seen near Victoria a couple of days earlier and then not seen again.  It had been in with a large group of American Pipits.  I was now watching a group of 20 plus and it would make sense for the Victoria bird to have crossed the straits and visited this spot.  Unfortunately I had to conclude that what I had seen was most likely a reflection or a particular way in which it caught the light since I could not find the bird again.  The view had been brief and I had very good looks at all birds thereafter so just wishful thinking.

A few minutes later a small flock of larger shorebirds landed on the beach.  They walked away from us and then flew off but I got a single photo of one of the Whimbrels.

Whimbrel on the Beach

Time to leave.  We decided to make a quick stop at the fish hatchery before heading back to Seattle.  On the way we ran into the group from the trip looking intently through scopes at some distant shorebirds.  Denny had found two American Golden Plovers – excellent birds and my first for the year.  They were way off across a bay but in good light it was possible to tell in the scope that they had golden backs and dark caps and the black on their bellies extended to under the tail – the key field marks.

We added nothing at the hatchery and headed homewards hoping to have a decent ferry connection.  It was quite a way but when we got to the Kingston Ferry it looked like we would not have much of a wait – getting on to the next boat.  Gulls and cormorants were near the terminal and a Rhinoceros Auklet was close in – the last good bird on a very good trip.  Linda held up well – probably somewhat bemused but she enjoyed the birds and even the birders but the highlight was clearly the beautiful beach and coast around Neah Bay.  I just saw that a Dickcissel was found there yesterday.  If I were not leaving for Alaska tomorrow I would already have been there to try to find it.

One thought on “Do You Know the Way to … Neah Bay?”