Some of my posts have been about fairly exotic or charismatic birds.  There is nothing wrong with a Lark Sparrow (Chondestes grammacus) – not bad looking and not all that common but definitely neither exotic nor charismatic in comparison to those other featured birds.  But my aim in writing these posts is to share some experiences that may have some meaning or value to others and admittedly to relive some past moments for me and to recall the joy or excitement of the time.

I saw my first Lark Sparrow on June 20, 1975 on Dodson Road near Ephrata.  I cannot remember a thing about the day or the observation.  Later recorded observations were at Toppenish, Balch Lake, Gingko SP, Wilson Creek and several other spots.  On Decker Road in Pasco on May 15, 2014 they seemed to be everywhere and I saw 10 in less than an hour – for sure a memorable experience.  All were nice times, but the memory that is the basis of this post was a single sparrow almost exactly a year later on Road C Northeast in Grant County between Moses Lake and the Potholes – May 19, 2015.

I was heading off to Walla Walla for another great trip with Mike and MerryLynn Denny this time up onto Biscuit Ridge hoping for a Great Gray Owl and earlier that day had success in tracking down a pair of Long Billed Curlews on Hungry Junction Road in Kittitas County and then a Yellow Breasted Chat hiking in from the Black Throated Sparrow spot on Recreation Road in Gingko State Park.  I had fished on the Yakima River the previous day and it was my fishing guide who told me about the grass farm on Hungry Junction Road where he had himself seen some Curlews. 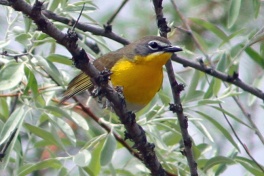 When I left Vantage I did not have a specific plan in mind but thought it might be fun to visit the rookery area at North Potholes – a place my Master Birder Class had visited and enjoyed in 2013.  Since I had not planned ahead, I relied on my GPS to get me there and plugged in the destination and followed directions.

I cannot recall what preceded it but at some point the GPS told me to turn south on Road C Northeast an unpaved road.   At least several miles in I passed through an open gate.  It registered as odd but the gate was open and the direction seemed correct so on I went.  Some miles in I passed by a corral on my right where a bunch of cowhands were working cattle into the corral or possibly from the corral onto trucks.  This is open range and cattle are not uncommon even if cowhands might be.  I waved as I passed by and they waved back.

Maybe another 4 miles later I arrived at North Potholes – well sort of.  It was definitely North Potholes but not the area I remembered from the Master Birder trip and in fact there was another gate – this one closed that led to what looked like the more familiar area.  It seemed wrong but the area was quite birdy looking and just as I arrived at the locked gate I saw a Black Headed Grosbeak and then a pair of Eastern Kingbirds – my first of the year – so how bad could it be? 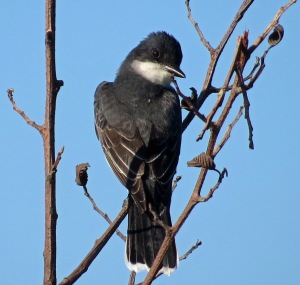 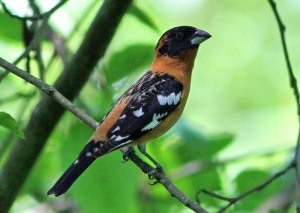 Then it hit me – HARD – two and two really does add up to four.  What if the reason the first gate was open was because the cowboys had the key and had come in to work the cattle AND what if when they were done, they went back out and locked the gate behind them AND what if I did not get there before they did?????  Trouble – BIG TROUBLE – because the rest of the area was completely fenced in and I would have been many miles from any help – if any help really would have been a useful help in any event.

I no longer was at all concerned about how birdy this area was, I got back into the car and went as fast as I could back towards what I hoped would be a still open gate.  Sure enough, I arrived at the gate just as the last of the cowboy vehicles had passed through and one guy was walking back towards the gate to lock it up and prevent weirdos like me from getting in – BUT of course in this case had it been a tad earlier or I had gotten there a tad later, it would also have locked this weirdo IN!!

I had lots of adrenaline racing through my system and once through the gate, I just stopped to catch my breath, settle my heart and thank all my lucky stars.  And as I did so what flew up and landed on that infamous gate – a Lark Sparrow of course – my first of the year and a wonderful consolation prize.

Lark Sparrow (on the sage next to the re-locked gate)

The good news (in addition to the Lark Sparrow) was that I was not trapped.  The bad news was that I had not had a chance to see the great birds at North Potholes.  The further good news though was that I definitely had time to get to Walla Walla early and try to find a White Faced Ibis at Millet Pond.

At Millet Pond I indeed found not just one but at least 10 White Faced Ibis and also had some other nice birds including Cinnamon, Green and Blue Winged Teal, Avocets, Black Necked Stilts, a Solitary Sandpiper and a single Yellow Headed Blackbird.  Four Bullock’s Orioles on the way out put an exclamation point on the day.

Although I am not going to add much detail – saving it for another blog post, the following day I was joined by Jon Houghton and we accompanied the Dennys onto Biscuit Ridge where the birding was as great as the great company.  In addition to a dozen each of MacGillivray’s and Yellow Warblers and 25 Townsend’s Warblers, we also had 5 Lazuli Buntings, 10 Calliope Hummingbirds and’ oh yeah, a photogenic Great Gray Owl and a similarly photogenic Green Tailed Towhee – one of three.  And a bunch of other great birds.  Indeed a super trip!

It did occur to me that if I had not raced to the gate, I may never have made it to Walla Walla and had the great trip.  So what are the lessons here:  One might be – don’t trust your GPS or at least your Garmin (my version).  Another is maybe to use the GPS but be sure you have looked at a map personally.  Another is probably that when you get to an unlocked gate, think of why it might be unlocked and proceed if at all – very carefully.

But maybe too the lesson is that all’s well that ends well and as I have said before – life should be about gathering experiences that provide good stories and then being sure to live to be able to share them.  I hope you like this story – whether or not any of the lessons are of value.  And maybe the ending is that if you let it happen there is usually a silver lining or a consolation prize when first prize is not attained.  The Lark Sparrow was certainly that and will remain a favorite bird because of the associated story for me.