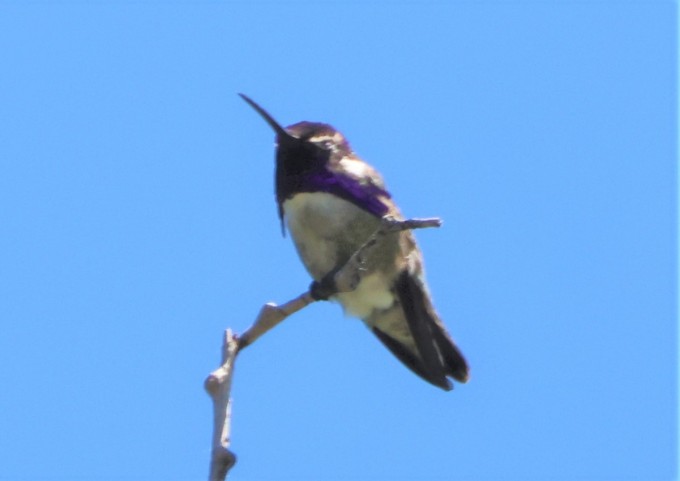 Sunday June 13th was supposed to be a day when Cindy and I could attend to our “to do” list without commitments to anyone else, no places to go and no social engagements ahead. There were a few things to still move from #217 to #207, details to work on for our wedding now about 10 weeks away, but compared to most of the past 6 weeks, a pretty slow and quiet day. I had done a marathon birding trip to Eastern Washington 10 days earlier and was considering another one the next week when Cindy would be off to Lake Chelan with her “game game gals”, but there was nothing pulling me out into the field – no bird to chase.

At 10:30 a.m. still reading the New York Times, sipping my coffee, and comfy in PJ’s and bathrobe, an Ebird message popped up on my phone. Good friend and excellent birder Deb Essman had reported a Costa’s Hummingbird in “the grasslands” in Kittitas County. The report said it had been found the previous day by Walter Szeliga, another excellent birder. The description was right on – this was for real. I immediately texted Deb, got a confirmation, followed with a quick call getting directions, and playing out Rule 1 – “Go Now” – hit the shower and was on the road by 10:45 a.m. It was 126 miles to the target which turned out to be at Walter’s home. With no traffic and no stops, it should take less than two hours via freeway. I had to get gas and there was a brief traffic tie up, although it was Sunday. Even so I was at Walter’s House by 1:00 p.m. No birders there…how about the bird?

Some background. Costa’s Hummingbirds are generally found in low desert and semi-arid habitats in Southern California and Arizona in the U.S. and is resident in Mexico. It is among the smallest of our hummingbirds and the male is easily identified with a short bill, a long flared purple gorget and a white “eyebrow”. I had recently seen them at three locations in Arizona and had numerous sightings in Southern California. I had NEVER seen one in Washington where they are very rare with only a handful of Ebird records – the latest being a single observation at a feeder in 2013. Although 2021 has been a great year for new State birds for me, as the State Life List grows, additions are getting harder, thus my decision to Go Now.

Walter was in Wenatchee at a Little League Game with his son. Although there was a chance to see the hummer from the street, entering the yard would be better. I parked on the quiet street and walked down the driveway to the front door and knocked. Stacey Szeliga was home and it was immediately apparent from my binoculars and camera, that this was not a social call. But in fact it turned out to be that as well as we had a nice visit, finding out that although she was not a birder, she knew a lot about birds and her family had generations of birders dating back to one who knew John James Audubon. She told me where the Costa’s had been seen and let me roam free. The most likely spot would be a roost on some bare poplars bordering her yard and the one adjacent next to the driveway. There was also a small feeder at eye level at the end of the driveway. It had not been seen there, but it added reasons for it to remain and feed.

As is clear from many of my other writings, it often does not happen this way, but within just a few minutes, I heard the distinctive chatter call notes of a male Costa’s Hummingbird and then it landed on one of the bare poplar branches – posing for me. The sun was not at a perfect angle to catch the purple iridescence of its flaring gorget, but there was no mistaking this identity. Wow!!

This was my 429th species seen in Washington and my 416th species with a Washington photo. With no warning the hummer buzzed right over me and landed on the feeder. It was not there long enough for me to get a photo, but this was a good sign that it might remain for some time. I shared my good fortune with Stacey and told her of the visit to the feeder. I watched for another 10 minutes and the hummer did not return, possibly because one of the young Szeliga’s came out to shoot some hoops. I grabbed a photo of an Anna’s Hummingbird that was on a nest in their yard and then headed off.

It was a long drive for a single bird, but that comes with the territory on chases for new species – one of the signs of “Twitcher’s Disease” – the drive to add new species to lists – life lists or year lists or month lists or Big Day lists – lists for any of many geographical options – world, country, ABA area, state, or county or patch. The long drive home was made far worse by an accident somewhere on Interstate 90 that added more than an hour. I had posted about the Costa’s Hummingbird on Facebook before heading off and had been contacted by other birders who were interested in what I found. And I had contacted some birding friends to alert them of the rarity. I brought them all up to date, and thanked Walter and Deb with texts. Others contacted me for details. Over the next few hours, several others showed up and got to see this little beauty. The parade continued on Monday and some friends have seen it again today – Tuesday the 15th. I think this guy may stick around for awhile.

During my visit with Stacey, we noted how cool it was that this rarity had chosen the yard of an excellent birder to visit. I recalled other Washington rarities visiting birder’s yards: the Calliope Hummingbird visiting Jeffrey Bryant, the Tennessee Warbler visiting Ed Newbold, and the Rose Breasted Grosbeak visiting Ed Swan and I am sure there are others I am forgetting. In each case the excellent birders quickly identified the birds, knew of their rarity and notified the birding world, sharing the wealth so to speak. What if this hummingbird had instead visited a yard with a feeder down the street where the owner was not a birder but simply someone who enjoyed birds. They very well may not have recognized it as rare or even different. The same holds true for the Calliope Hummingbird, Tennessee Warbler and Rose Breasted Grosbeak. How often does this in fact often? How many other Costa’s Hummingbirds are in Washington right now? And the same question for all of those other fortunate coincidences and for rarities in general. There are a lot of birders around – covering a lot of ground – but there is much more ground not covered. What wonders are there right now? What will be seen tomorrow? The joys of birding.

One thought on “A Costa’s Hummingbird Picks the Right Yard”