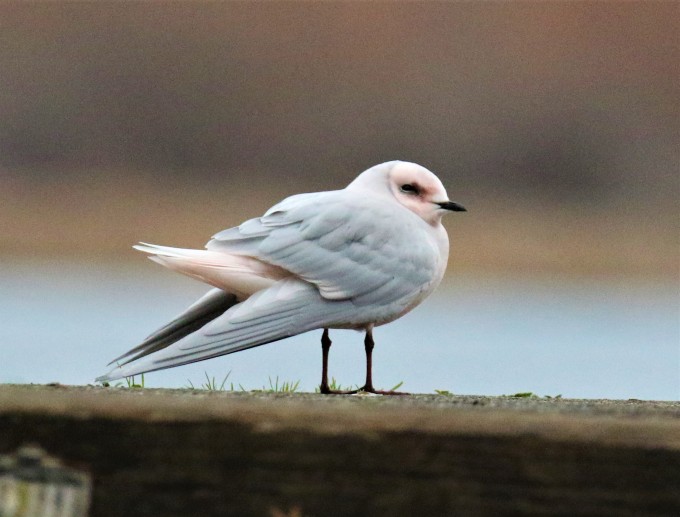 As Jon Houghton and I left the Mouth of the Cedar River late on the afternoon of Saturday, November 30 and reflected on an incredible day, we wondered if anyone in history had ever seen the three special species we had seen that day.  It started when we left Edmonds early in the morning to chase the Mountain Plover that had been discovered the previous day by Carl Haynie.  Paul Baerny was going to join us but fearing he was coming down with a cold, he felt it better to go it alone.  Everyone would agree, Paul is a sensitive and thoughtful guy…good birder too.

We arrived at Griffiths Priday State Park just north of Ocean Shores and parked on Heath Road near the bridge over the creek and began the hike out to the mouth of Connor Creek where the target had been seen the previous afternoon.  There was a single car parked at the road end.  Was this another birder?  We soon found out.  After walking less than a mile on the open beach, I spied someone with a spotting scope and his binoculars were trained on a something on the wrack line maybe 100 feet up from the waves.  Jon was walking along the dunes hoping for a Lapland Longspur while I walked the open beach.  As I got closer, I recognized the birder to be Scott Downes, an excellent birder and lister from Yakima, Washington.  As I got closer, Scott asked: “Do you see it?”  I did not until I looked where he was pointing.  There was a single bird on the beach and it was the Mountain Plover.

Rule 1 on a chase is “Go now”.  We had followed Rule 1 and now we would benefit from another rule on a chase – look for another birder and hope he/she has found the quarry.   He had and now we had it as well.  The Mountain Plover was a state life bird for all of us.   It is extremely rare in Washington.  One was seen in 1968 in Spokane.  Another was seen in Pacific County in 2000, a third in Ocean Shores in 2011 and another one had been seen there by a single birder in 2014.  I had not known about any of those others, so this had been an important opportunity and seeing this lovely bird on the beach was a joyous moment.  It had taken us less than 15 minutes from our arrival to find it.  I called Paul.  He was only 10 minutes behind us.  We watched the Plover scurry along the wrack line – a continuing photo op as the light was perfect and behind us.  Many pictures were taken.  Paul joined us and it was a state life bird for him as well.  It was state bird #445 for Scott – awesome!!

We watched the Plover for another 15 minutes.  Another friend Mark Tombulian had arrived and was walking up the beach toward us just in time … to see the bird fly off and disappear over the waves heading south.  He had seen the shape but certainly not a chance for a real ID.  This miss took some of the happiness out of the moment.  We hiked back to the parking area hoping the Plover had somehow returned to the beach and land giving Mark a chance.  It had not…sigh!!

It was not even 10:30.  Now what?  We drove the open beach near the casino at Ocean Shores and saw an almost continuous line of white shorebirds – thousands of Sanderlings foraging in the surf.  There were also hundreds of Dunlin and numerous Black Bellied Plovers.  We checked each one of the latter hoping maybe it would be the Mountain Plover.  No such luck.

The weather was beautiful with bright sunshine even if it was a little cool.  So far there was not much wind.  That would change at our next stop – the Point Brown Jetty at the southern end of Ocean Shores.  The hope was for a Rock Sandpiper – which would be a new year bird for Jon.   Rock Sandpipers, Surfbirds and Black Turnstones are together known as “Rockpipers”.   Rock Sandpipers are uncommon in Washington but this is probably the best place to find one.  I had 4 there the previous week.  The other two are common.  A flock of Rockpipers flew off just as we reached the rocks.  I was pretty sure I had seen two Rock Sandpipers in the mix of 40 plus birds.  Would that be it? Fortunately they all returned and for the next 20 minutes we watched them dodge the waves and forage on the rocks in great light and often no more than 40 feet away from us.  There were 20+ Surfbirds and 30+ Black Turnstones but where were the Rock Sandpipers?  And now the wind was picking up and the wind chill was pretty bad.  Still we waited.

Patience paid off and the Rock Sandpipers did return.  Not as rare as the Mountain Plover, but an excellent bird for the day.  Now what?

The next “what” would be a stop at the Mouth of the Cedar River in Renton to see if the Lesser Black Backed Gull was still there.  Not nearly as rare as the Mountain Plover, but a Lesser Black Backed Gull is quite rare and is a great bird in Washington.  Jon and I had each already seen it here, but I had not gotten a photo and we both felt it would be a great way to end this special day.  We found it quickly.  Later we were joined by another birder who had missed it on 5 earlier tries.  We made his day when we showed it to him as soon as he arrived.  I got my photo and as I said at the start, we wondered if anyone anywhere had ever seen a Mountain Plover, a Rock Sandpiper and a Lesser Black Backed Gull on the same day.

As we pondered that question, we got the great news that the Mountain Plover had returned to the beach at Griffiths Priday.  It was seen and photographed by Mark and many others. A very happy ending and Jon and I were pretty full of ourselves thinking we had an incredible day – one that would last in memory for quite awhile.

Little did we know…

At 1:30 p.m. on Sunday, I finally got around to taking a shower.  At 1:33 p.m. Dennis Paulson posted this on Tweeters, the Washington Birding Community’s main listserv: “Adult Ross’s Gull on platform N side of Marsh Island.”  It was not until 1:50 that I checked my emails and saw his message. OMG!!!!!  As I was getting dressed I called friends to tell them about it.  Ann Marie was on it and was waiting for her ride.  Jon Houghton was returning from West Seattle but was up for the chase.  I could not reach Mark.  Paul already knew about it too.  I even called friends David and Tammy McQuade in Florida who are doing a Big Year and had not seen a Ross’s Gull.  Jon said he could pick me up in 15 minutes.  I told him unless it was 10 or fewer, I would just go and see him when he got there.  RULE 1 – GO NOW!!  He said he could.  Traffic was not horrible and we made it to the trail leading to Marsh Island by about 2:30.  We met John Puschock coming to us on the trail.  He gave a thumbs up.  It was there…OMG!!!

We raced out to the platform.  Dennis was there as were at least another 10 birders.  All were looking out at the swimming platform – about 50 feet away – respecting its space and not wanting to scare what was there.  It was the adult Ross’s Gull sitting there quietly, its back to us.  A quick first photo and then I sat down to wait hopefully for it to turn and give us a better view.  But even if there had not been more, this was incredible.  A Ross’s Gull is iconic for a sought after mega-rarity.  This was only the third record for Washington State.  The last one was one at Palmer Lake in 2011.  There was another in 1994 in Benton County.

More people continued to come in.  Maybe 25 in all.  The Gull remained still for 15 minutes and then turned to give a profile view.  The light was not great, but the pink tinge which is one of the Gull’s famous fieldmarks was quite visible – more vivid in the scopes that were trained on it than in our photos.  Everyone was in awe of this occasion.  And everyone was happy – very, very happy.

Without any warning or any provocation from its admirers, after another 10 minutes, the Ross’s Gull took off and flew off the platform and out onto the water – maybe 50 yards out.  Some of the viewers and I then moved out onto the platform to see the Ross’s Gull on the water.  Then it happened…  A Bald Eagle swept in low and headed right for the Gull.  It lowered its talons and to our amazement and horror, it  snatched it and took off, the Ross’s Gull dangling behind it.  OMG!!!  It was like a scene from “Nature” or “National Geographic“.  The Eagle flew into a nearby Cottonwood tree and devoured what is probably the second rarest bird that has ever been seen in Seattle.  The rarest has to be the Swallow Tailed Gull found by Ryan Merrill at Carkeek Park in 2017.  [See my earlier blog post  https://wordpress.com/post/blairbirding.com/18247]

Eagle Perched for Its Feast 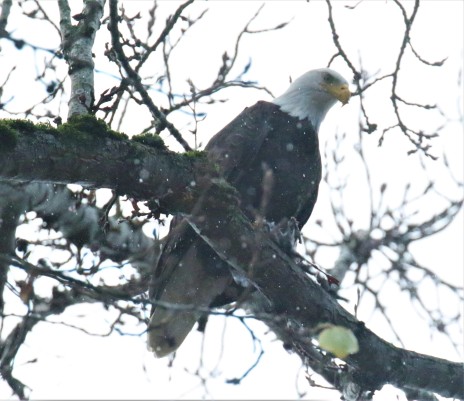 The lucky birders filed out and passed the unlucky ones who had arrived too late.  Many of the birders who had seen the drama unfold searched under the eagle tree for feathers or bones from the eaten Ross’s Gull.  Some were found and will make their way to local museums.  If ever there was a case in point supporting the Go Now Rule 1, this was it.  A delay of even 5 minutes had been the difference between success and failure for many this day. 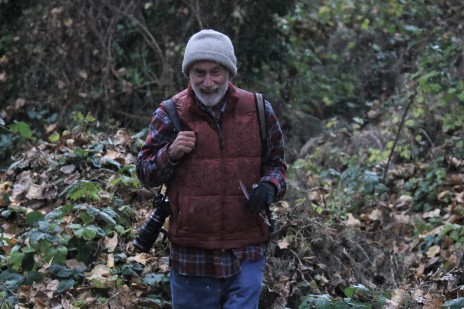 These past two days have probably been the best two consecutive days of birding in Washington that I have had.  As I said Jon and I had wondered if anyone had ever seen a Lesser Black Backed Gull, Rock Sandpiper and Mountain Plover on the same day ever before.  Add to that list a Ross’s Gull and I am positive that nobody has ever had those four species within any 30 hour period – anytime, anywhere.  Extraordinary is an understatement.

Earlier in the day Sunday Bill and Nancy LaFramboise had posted that they had a Brambling coming to their feeder in Benton County in Eastern Washington.  Almost as rare here as the Mountain Plover or the Ross’s Gull.  And they were the ones who had the Ross’s Gull in Benton County in 1994.  I write often about our amazing birding community.  These two days make the case.  The Mountain Plover was seen by Carl Haynie as he was working on a coastal survey.  He reported it on the Facebook where I saw it and then Ian Paulsen reported that on Tweeters.  Carl later posted on Tweeters and Ebird with great details so others could look for it.  The Ross’s Gull was reported on Tweeters by Dennis Paulson, but the underlying story is amazing.  His partner Netta Smith was walking the trail on Marsh Island and somehow noted an unusual gull on the platform.  She did not know what it was but knew enough to know it was different.  She took a photo with her phone and sent it to Dennis who of course knew immediately and took off to join her.  His report brought many others there quickly.  I had been able to get the word on both birds to some others who also made the trip.  Later Bill and Nancy reported that the Brambling had not been seen again.  I had considered a chase – but now would not.  And it all happens so quickly…

The best way to end this post is with another photo of the Ross’s Gull.