When there were heavy rains on the night of November 6 and the temperature dropped significantly and the winds increased significantly, it appeared that the decision to unofficially get 50+ species the day before had been a good one.  But enter Zach Poland who would be leading the show on the 7th and his preparation, skills and enthusiasm were confidence inspiring.  It also helped that he seemingly had an in with the weather gods as at least where we birded as we did not experience a single drop of rain.  Maybe I had something to do with that as well.  Miraculously in all of the birding I had done in the previous 48 states, I had experienced rain only for small parts of two days – a little in New York and a little in Virginia.  That rain had affected the birding but only marginally.  Similarly there had been little wind and never that combination of the two that may well have made 50 species an impossibility.

Despite a full time job and a family with two young children, Zach Poland is currently the #4 birder on Ebird in Oklahoma for 2019.  I cannot imagine that the three birders who rank ahead of him are better birders than Zach.  He is that good and there is such a positive vibe about him that there was no doubt that we would succeed this day.  And it was pretty clear that he was motivated to beat the 66 species, Floyd, Bob and I had seen the previous day as well as the 81 species I had seen in Kansas.

We began at 7:15 a.m. at Mohawk Park in Tulsa and by 7:45 a.m we had 25 species including both Virginia Rail and Sora, the latter seen briefly.  We also had maybe 1000 Franklin’s Gulls constantly overhead. During my visits to the three states on this last leg of my journey, there would be lots of sparrows – altogether 13 species.  There would be some new ones today and the first of those was a Red Form Fox Sparrow – so different from the ones I see regularly in the Northwest. The best bird came almost at the end.  Zach was pushing through the grass and yelled out something.  I was maybe 30 yards away and could not make out what it was, but from his excitement I knew it was something good and I got to him as best I could – just in time for a quick glance at a Dickcissel – very late for the area. 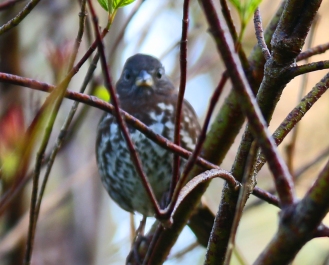 It was cold and it was windy but it continued to be dry and we were half way home when we arrived at stop #2, Monument Point at Lake Yahola where there were lots of ducks (8 species) and lots of gulls (3 species) and a brief look at some Least Sandpipers.  Zach’s keen ears picked up an American Pipit, our 19th species at the spot and our 38th for the morning and it was barely 8:00 a.m.   Photos were not so great in the still gray light, but it was pretty hard to miss one of the single American White Pelican on the lake. 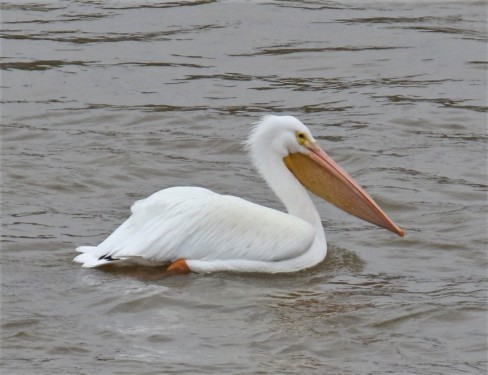 Now we were back to Mohawk Park at the Mary K. Oxley Nature Center.  It was wonderful with a dash of frustration.  The Center is a real gem – over 800 acres with 9 miles of trails and a 70 acre lake that was dug out by the Civilian Conservation Corps during the Great Depression.  More than 250 bird species have been recorded there and in our almost two hours there we saw 42 species including an astounding 10 Red Headed Woodpeckers (both adults and juveniles).  Half of the species were new for the day bringing us to 59 making Oklahoma the 49th state with 50+ species – now officially – important as I wanted this day with Zach and Floyd and Bob as parts of the official experience. 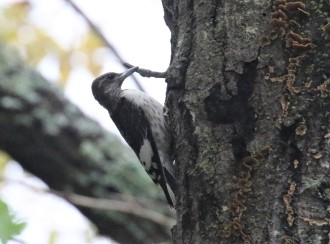 About that frustration.  Zach was persistent in trying to find a LeConte’s Sparrow for us.  Oxley is the best place in the area to find them in November and the prairie grass habitat was perfect.  A beautiful sparrow, I had missed LeConte’s at Quivira in Kansas and had seen only one in my birding life – a mega state rarity at Discovery Park in Seattle last year.  At Oxley we had lots of Swamp Sparrows and Song Sparrows and White Throated Sparrows and Lincoln’s Sparrows.  Finally Zach found one and then one more in a secondary area along the trail.  But unlike the “Swampies” and Songs and White Throats and very much like a LeConte’s, the two seen were in the open for split seconds before returning to the depths of the grasses out of sight.  Countable? Yes.  Photographable? No.  Frustrating? Yes.  Fun?  Yes that too.

LeConte’s Sparrow – Unfortunately the One from Washington

It was now approaching noon and the goal switched from 50+ to more than 66 (the previous day’s total). We soon reached that as we found new species at the Spartan College Fields.  My only White Winged Dove of the trip flew off its wire perch as soon as I got my camera on it, but the Great Tailed Grackles were more cooperative.

Now past 66 species for the day, we moved on to the Keystone Lake Dam and Spillway where Zach promised a Black Vulture to go with the Turkey Vultures that we would see later.  Lots of Gulls, Pelicans, Cormorants and Great Blue Herons but not a single Vulture of any kind – until I finally made a contribution to the day and spotted a single Black Vulture soaring away from us.  I will use that as a segue to talk about group dynamics.

Most of my birding on this adventure has been with a single other birder or maybe two.  A few exceptions have been when joining bird walks – Audubon trips or State Ornithological Societies.  It is usually a plus to have many eyes searching for birds but if too many, that may be accompanied by too much conversation making hearing difficult or even putting off the birds.  Only rarely do personalities conflict and prove troublesome.  That was certainly not the case on this day.  It would be hard to imagine a better threesome to have with me than Zach, Floyd and Bob.  Their birding skills far surpass mine and everyone added to the entertainment value of the day.  All had great stories about immense and diverse birding experiences as well as life perspectives.  There were only little glimpses into Zach’s non-birding life but just enough to make me believe that if alone, we would have found mostly full common ground.  Maybe it was because they were also participating in this day, but Floyd and Bob were 100% onboard from the start that a goal for the day would be to surpass the 66 seen without Zach the day before.  In fact after helping me get to 50 each day, there was no sense of competition at all – just enjoying the time together.

The proof of the previous assessment was in the group’s decision on where to head next.  We could head west for some very different habitats but there was not really sufficient time for that.  Instead we switched the focus from me to Zach.  He is an avid County lister but did not have much experience in either Rogers or Mayes counties where Floyd, Bob and I had birded the day before.  So we retraced steps from the previous day and added birds to Zach’s County lists and our day list.  It was particularly interesting that we saw some of the same birds seen the day before in almost exactly the same spots this next day.  For example we again found the Loggerhead Shrike in the same tree and a Yellow Bellied Sapsucker in the same yard.

Zach had never seen the giant totem pole so we had to make a return visit to Ed Galloway’s Totem Pole Park.  Here is part of the story:  Ed Galloway (1880-1962) was born in Missouri, fought in the Spanish-American War, and was on his way with his family to California when he took a temporary job in Foyil. He spent over 20 years teaching boys woodworking in the Children Home orphanage in Sand Springs, and retired to property he purchased in Foyil.  Working mostly by himself, Galloway started the Totem Pole in 1937 and finished in 1948. Although sometimes credited as a monument to Native American tribes, Galloway said he built it after he retired so he would simply have something to do. He thought it would be a good thing for youngsters, Boy Scouts in particular, to visit. The totem pole is constructed of concrete over a scrap metal and sandstone rock skeleton. Sixty feet tall, 30 feet in circumference, the pole rests on the back of a giant concrete turtle. Sculpted and brightly painted renditions of spirit lizards, owls, and headressed Indian chiefs climb to the pinnacle.

Who can resist bits of Americana like this – speaking of a different age in America before mass communications and much technology.  I have made a point of visiting similar places on my 50 state journey and they are always good reminders of simple pleasures and how people express and share their passions.  For us it was a fun diversion, an opportunity for some silly photos and also a chance to add Cedar Waxwings to our list.  The place was also overrun by a flock of Yellow Rumped Warblers – our best views of the day.

Blair and Zach and Floyd – There’s A Cedar Waxwing in the Tree, Floyd! 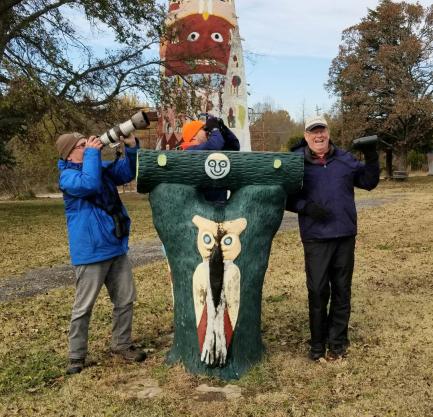 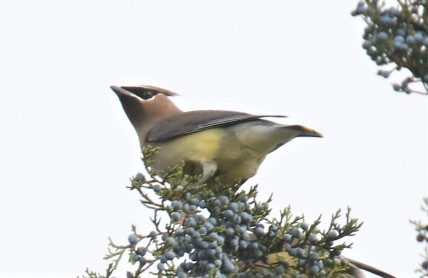 Bob, Zach and Floyd and the World’s Biggest Totem Pole 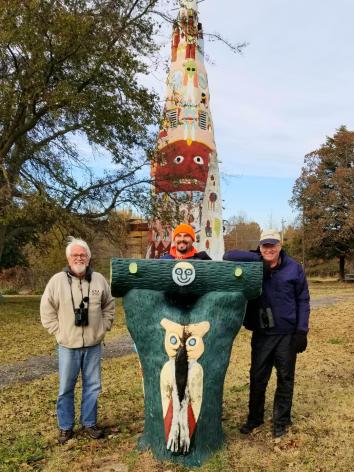 We continued retracing yesterday’s route and this time found the gate locked at the Pryor Sewage Treatment ponds.  We were still able to add a number of ducks and the Great Egret but no White Faced Ibis this time.  We ended the day with a large flock of blackbirds that included numerous Brown Headed Cowbirds our 85th species for the day so we did surpass Kansas.  It was also species number 96 for the two day combined – my Oklahoma State Life List.

There was a non-birding spot that caught our interest near the Pryor Ponds on both days.  It is a giant industrial complex in the Mid America Industrial Park that includes the ponds.  There was no signage to identify it but we were told it was a Google server farm.  One picture is from the road and the other is an aerial one from (appropriately) Google Maps.  Neither captures the scale of the complex with huge cooling and power capacities being evident.  I wouldn’t trade it for the birds we saw at the ponds but I am sure a tour inside would be fascinating. 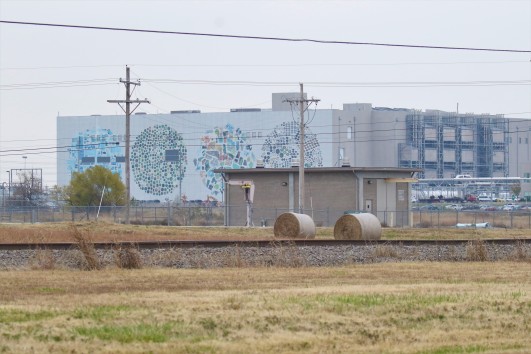 I wish I had had a recorder going on these two days in Oklahoma.  Lots of laughs, some debates and lots of stories.  And lots of birds.  With one more state to go I was feeling energized and not at all tired.  In fact I was already beginning to miss the adventure that came with each state, the chance to fully commit to the task at hand while greatly enjoying every aspect of the hunt, the finds, the misses, the varying scenes and habitats, the landscapes and geography and most of all the company of fine people who shared my passion for birds and birding.  There are so many people I hope to see again.  Certainly that is the case for Floyd Murdoch, Bob Holbrook and Zach Poland.  It is not possible to fail to enjoy their company.  Deepest thanks to all three.

One thought on “Oklahoma Day 2 – State 49 Is Now Official”