I know this is a different kind of blog post, but particularly at a time when so much of the country is divided into “us” and “them”, maybe it is in order.  In an earlier post, I shared some moments from a trip by Brian Pendleton and me to look for a Northern Mockingbird that had been reported frequently from a residential area in Kirkland essentially as follows:  When we arrived at the designated address in Kirkland, I parked in the driveway behind one of the cars, with the intent to knock on the door (the owners had been described in many reports as very friendly) and ask if they had seen the Mockingbird and if we could take a look.  (However) As soon as he got out of the car, however, Brian exclaimed “There it is!”  Our Northern Mockingbird was perched in the open on a small tree at the adjoining home. It took off to the south.  We followed and found it in a tree three homes away.  It then flew back to the north and as we started to retrace our steps, we saw another fellow walking towards us.  I wondered if maybe my car was parked behind his and was either blocking his way or at least needed an explanation.  This turned into one of those fun intersections on a birding trip.  Brad was the owner of the house next to where the holly bush was located.  He led us to the house with the holly and into the back yard where the Northern Mockingbird was conveniently perched completely in the open on a wire directly above us and next to said holly tree. We also had a great talk with Brad about hunting, ducks, construction (he is a contractor) and birds and birders. Really a good guy – a perfect host for visiting birders. 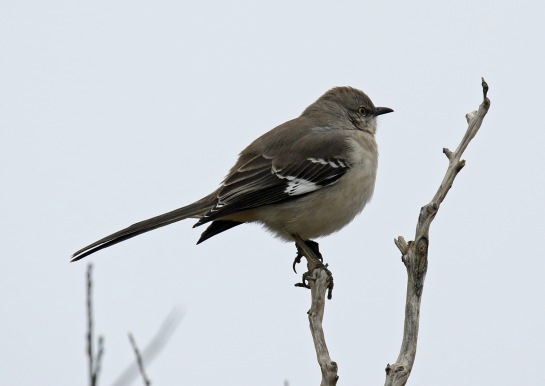 What I did not add at the time was that Brad not only was good company and an expert guide in this case, but when we talked about hunting and conservation, he reached into his well stocked freezer and gave each of us some Mallard breasts.  How cool was that!!  Well last night I got to find out just how cool it really was.  Lynette and I had a chance to cook up the wild duck breasts.  It was an amazing dinner.  Part of the fun was to research all of the recipes for wild game and duck breasts in particular.  I am not a hunter and as best I know, I have never had any wild game and am unfamiliar with a very extensive library of recipes – simple and complex – for duck and many other meats.  We found some that were closer to the complex side but manageable.  I will not go into the details, but we chose three dishes:  young asparagus – steamed and then flavored with sesame oil and sesame seeds, Shiitake mushrooms sauteed in butter, shallots and garlic and the main fare of duck breasts with a sauce that was a reduction of home made black raspberry jelly and some other little touches.

We had read that wild duck tasted a lot like steak and while cooking it certainly looked like that.  The taste was very similar as well – tender and flavorful and the reduction was a great compliment.  It was a great meal – appearance and taste.  Not that I will probably repeat culinary posts very often (ever?) but the meal frankly is worth such mention and wild duck is highly recommended.  But the purpose of this writing is to get back to a theme of many of my posts and of my birding life.  My birding inserts me in situations where there is always the chance for great birds, great places and great people.  Rarely does a trip not include at least one of those, and at the best of times, I get all three.  The Kirkland Mockingbird was a great bird in not such a great place but with the real highlight being the great intersection with Brad – a hunter not a birder.  As I said at the start, our vision is too often of two worlds – ours and theirs.  But the inescapable truth is that it is ONE WORLD – and that world and each of us would be better if we all spent more time finding common ground and value in each other’s perspectives and passions.  Sure, there is the need for all to follow our passions responsibly and respectfully but we are not alone.

There are many wonderful birders AND wonderful hunters out there, just as there are some of each that are not so great.  The early birders like Audubon were collectors who killed the birds to get specimens for identification and study.  Digital cameras have changed that it many ways and in that sense I hunt birds daily but shoot them with the camera only – adding to that kind of collection.  Hunters often are a major source of funds for preservation of habitat where I find my birds and there is a clear benefit to hunters and birders alike.  Hunters are often active in important conservation efforts shoulder to shoulder with birders.  Ethical hunters gather their spent shell casings and have moved away from lead shot.  Maybe they will someday move to copper bullets instead of the lead ones that do much harm to scavengers including the California Condor.  They will do so much more readily if we can come together rather than battle one another.

Meeting Brad and sharing the Mockingbird and then stories together was a highlight of that day.  I will fondly remember that and last night’s wild duck meal for a long while and it will always remind me to find room for others as I pursue my own passionate course.  Really leaves a good taste to do so…   Thanks Brad.

3 thoughts on “Mockingbirds, Duck Breasts and Fine Dining -a World with Room for Hunters, Birders and Birds”