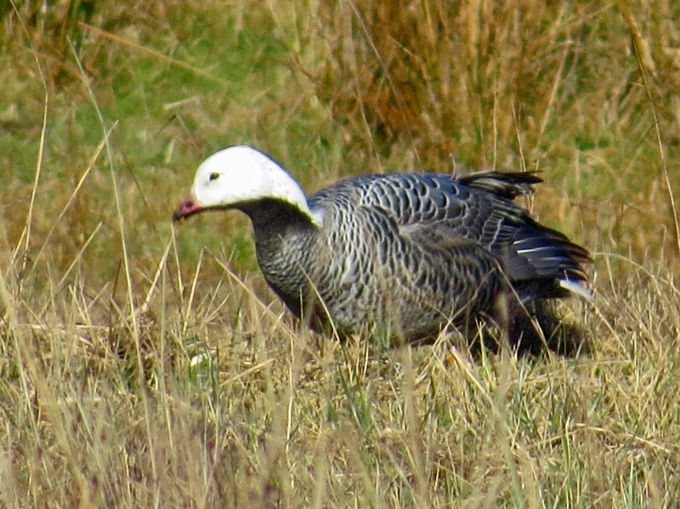 With this title, this blog could be about some of my birding in faraway places like Australia or Brazil or Africa.  Someday but not today.  Nope, it is about birds much closer to home BUT seen at great distance – really far away and I have pictures – very poor ones – to prove it.  After so many wonderful and rewarding trips to Neah Bay the past two months, two trips to Sequim seemed to barely get the car warmed up.  Here is the story.

On Sunday, December 11, John Gatchet aka the “Emperor Goose Whisperer“, found an Emperor Goose at the 3 Crabs hotspot in Sequim.  This was at least the second time in the past few years that John had found and reported an Emperor Goose in the area.  I had made the trek to Gardiner Beach Road on December 19, 2013 to observe and photograph one and then returned to Sequim at Knapp Road on February 13, 2014 for another one of his geese.  As soon as I saw John’s Ebird post, I contacted Brian Pendleton and it was an easy sale to plan to leave the next morning to try for this new year bird for each of us. 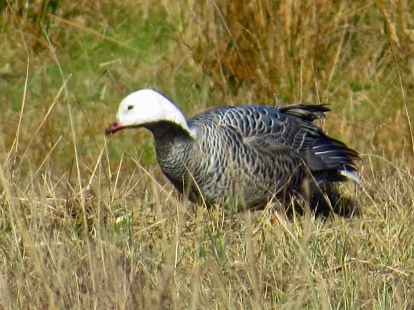 Repeating our established procedure, Brian and I caught the 6:20 Edmonds Ferry and arrived at the 3 Crabs Hotspot in Sequim by 8:00.  We were there, but the Emperor was not.  We spent much of the next four hours checking every field and shoreline in the vicinity looking for our goose – a definite wild goose chase.  Along the way we ran into Alex Patia who was also looking for the Emperor Goose.  Our paths intersected many times during the day and we shared information, but it was just not meant to be – no Emperor was seen.  On the way back from Neah Bay, some other birders including Ann Marie Wood and Frank Caruso had also searched unsuccessfully for the rare goose.  Was this to be a one day wonder?

Other good birds were being seen in the area, so we sought them as well and settled for a flock of Bohemian Waxwings along Jamestown Beach Road and then a Pacific Golden Plover in a large flock of Black Bellied Plovers that were feeding in a large field on Schmuck Road.

At least we got home earlier than we had on all of our Neah Bay trips.  The Pacific Golden Plover and the Bohemian Waxwing were good birds, new birds for Clallam County for me and a good consolation but we expected the Emperor Goose was still somewhere in the area and we were pretty disappointed.  The Emperor was indeed still around and Alex Patia’s persistence paid off as he found it the following day along Dungeness Spit.  We had scanned that area the previous day unsuccessfully.  Birds do have wings after all – and when John Gatchet last saw the bird on Sunday he said it was flying off to the west – and Dungeness Spit was west of 3 Crabs and was an area where one of the previously reported Emperor Geese had hung out.

I called Brian again and we planned a second assault and invited Ann Marie and Frank to join us.  This time we were going to take the 7:10 Ferry, meeting at my place at 6:30 instead of our normal 6:00 a.m.  At 6:30. I got a call from Brian – uh-oh.  They had a car problem on I-5 and were not going to be able to make it in time.  We considered a Plan B rescuing Brian and taking a later ferry, but the problem required AAA assistance and he needed to remain with the car and even the next ferry was not going to work.  Sadly, we had to leave him behind – a major disappointment for all of us.

My plan was to start at the Marine Drive overlook hoping it would provide a view of the inside of Dungeness Spit where just maybe we could find the Emperor Goose as previously reported.  But first we had an OMG moment as we viewed the HUGE moon low in the sky at the Hood Canal Bridge in beautiful clear weather.  Maybe it would be a good omen.

Moon over the Canal

We arrived at the overlook around 9:15 and set up our spotting scopes.  Within no more than two minutes, we spotted some Brant near the distant Spit and then Frank picked out the white head of the Emperor Goose.  Where Brian and I had failed to find it with hours of searching on Monday, now two days later we had it within moments; sometimes it just works that way.  The Goose was FAR AWAY – more than a mile and the view was pretty poor, but there was no question about the ID through the scopes as the sky was clear, no wind meant no waves, and the sun was at our back.  The picture is terrible but I include it as it was the best we could do and this would be the theme for the day (and this blog).

As we were packing up to look for other goodies, Matt Bartels drove up and I gave him the thumbs up communicating our success and we quickly got Matt onto the Emperor.  I snapped a fun photo of Ann Marie, Frank and Matt looking at the Emperor Goose.

With our main target already found, we were now going to look for the Bohemian Waxwings that Brian and I had seen on Monday and which had been around for a week.  It had taken Brian and me only moments to find the Waxwings but that was then and this was now – and now was a challenge.  Where before there had been a hundred or more Waxwings, today we struggled and searched for over an hour to finally find a single bird – again fairly distant.  It was a new year bird for Ann Marie and a new Clallam County bird for both Ann Marie and Frank.  It was also the 300th species Ann Marie had seen in Washington this year – a nice milestone. 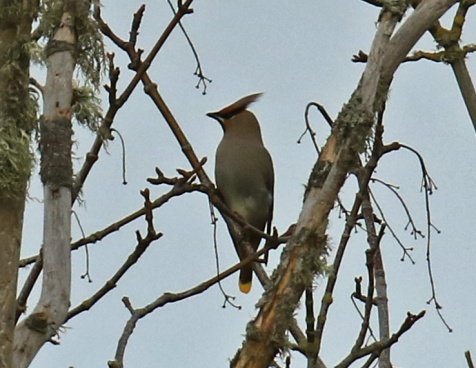 A highlight while searching for the Waxwing was a gorgeous Peregrine Falcon that perched on one or another of the leafless trees nearby.  Maybe it was responsible for the absence of the Waxwings.  Another beauty was a Golden Crowned Kinglet – one of a small flock of six. 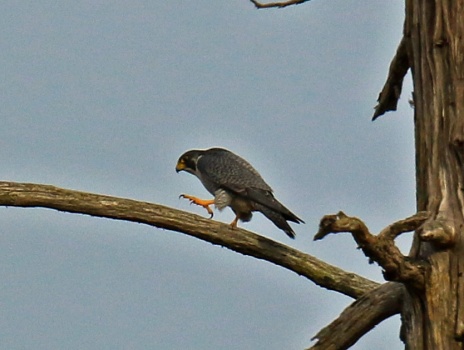 Even with the hour plus it took us to finally find a Bohemian Waxwing, we were still early in the day and took off to look for another rarity – the Willet that had been reported at Dungeness Landing County.  Matt had seen it earlier and now joined by Mary Frances Mathis, we caravanned to the site and Matt quickly refound the Willet essentially in the same spot – another FAR AWAY spot – where he had left it more than an hour ago.  Another new county bird for all of us.

Three good birds in less than 3 hours.  Brian and I had observed the Pacific Golden Plover in a group of 150+ Black Bellied Plovers on Monday.  Jon Houghton had looked for it on Tuesday afternoon and had not found any plovers in the field at all.  Matt had the same experience earlier this morning.  However, when Ann Marie, Frank and I arrived at the field on Schmuck Road, Matt and Mary Frances were there and looking at the scattered group of Plovers and it did not take too long to find the much smaller and much browner Pacific Golden Plover foraging with their Black Bellied cousins.  Again – more FAR AWAY birds and this is reflected in the photo, but while I had seen one earlier at Perch Point, I had not gotten a photo so this one would at least make up for that.

Our stop also gave us a beautiful view of the snow covered Olympic Mountains – even as the clouds were starting to come in. 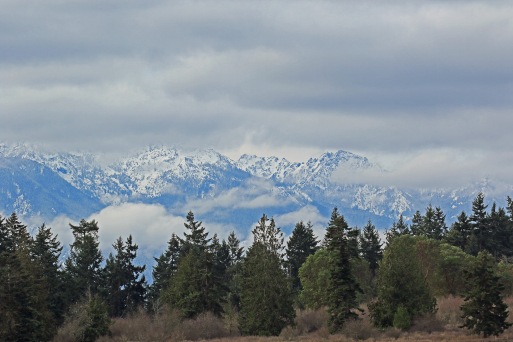 They had not been the best of looks – all were FAR AWAY – but we had had a terrific day – four excellent birds: Emperor Goose, Bohemian Waxwing, Willet and Pacific Golden Plover.  We headed back home hoping to hear that Brian had found his way to the Emperor Goose coming on a later ferry.  We arrived in Kingston just after 2:00 P.M. and waited for the 2:30 Ferry – hours before our normal post Neah Bay routine.  It was getting grayer and colder, but we had had great weather to go with the great birds.  The full moon had been a good omen indeed.

The Ferry Arriving at Kingston with Mt. Rainier in the Background

We got home in daylight and not too long afterwards I got some really good news.  Brian had made it to Dungeness Spit and had walked out to get a close up of the Emperor Goose – a happy ending indeed.